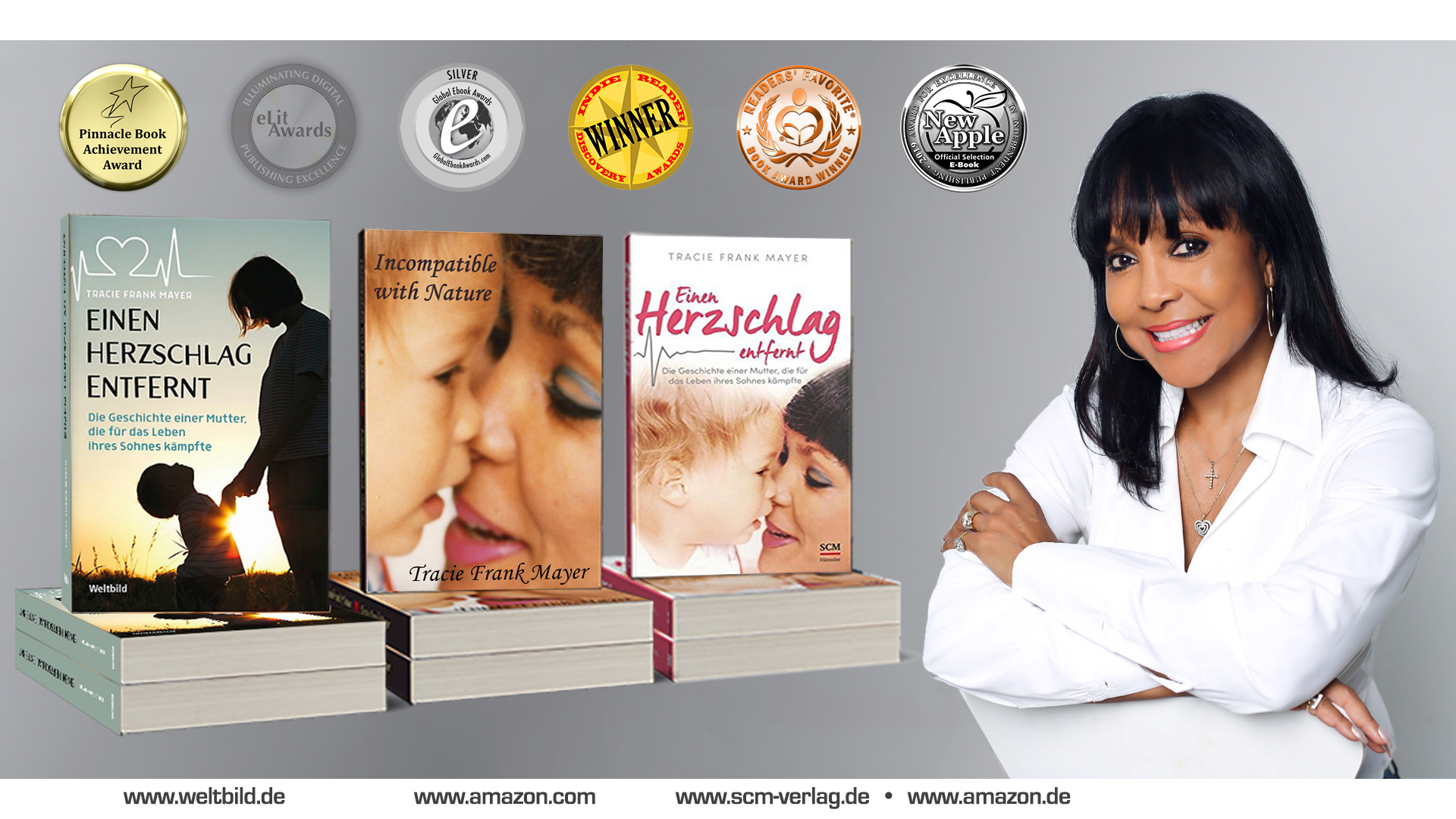 Tracie Frank Mayer is an incredible woman with unbelievable strength. Her book is an inspirational story of her fight to save her son’s life when all seemed hopeless.

This true story is about a young black American woman who left her family and friends to marry a German man and move to his country, not speaking a word of German. Six months later baby Marc was born with only half of his heart. She was told by the doctors that there was no surgery to save him and was advised to let her baby die. Today Marc is 35 years old and thriving.

Tracie wrote the book to inspire others facing insurmountable adversities. Her main theme is to never give up. I spoke with Tracie regarding her shock, horror and battles in her fight to save her son, and her triumph in accomplishing that….

You had just had a brand new baby and as a mother myself I can’t even imagine what you must have felt when you learned the news that your son was born with only half of his heart.

I was totally in shock and the thing is that my entire nine months while I was pregnant, I was going to my obstetrician and getting my regular check- ups. He kept telling me that the baby was fine, and that I was doing fine. He even gave me the pre-natal print out of Marc’s heart rate. It showed that his heartbeat was steady, and strong and normal. So, you can’t even begin to imagine the shock that I had when I was told that he was born with only half of his heart. That is something I will never get over.

Do you ever wonder why they didn’t detect that?

You know, they did not have the equipment to detect it at the time. As a matter of fact, I was at a conference in Barcelona and an attending cardiologist said that the diagnostic tools to check for these cardiac diseases in utero were first available several months after Marc was born.

If Marc was born today do you think things would’ve been way different?

Oh yes, for sure. First of all, they would know during my pregnancy that my baby had a congenital heart defect. I don’t know if they would have been able to repair Marc’s heart disease, but I have read that many women can thankfully now have their babies operated on in utero. The moms know now and that’s a good thing, although I am reading on social media that some still do not know until their babies are born. But many women today find out when they are pregnant that their baby has some sort of issue. That’s a good thing because who wants that kind of surprise. You’re talking a life and death surprise.

How long after Marc was born did you find out that there was a problem?

He was 11 days old. I gave birth via cesarean section. He was in the breech position. At that time 35 years ago in Cologne, in this particular hospital that I was in, when a woman had a cesarean section she had to stay in the hospital from 10 days to two weeks. This whole time in the hospital I was nursing my baby, bonding and having a lovely time. Then on the day that I was released, the releasing nurse told my husband that they had made an appointment for us for the following day at the children’s pediatric clinic at the University of Cologne Hospital. She said they made this appointment because they weren’t sure if Marc’s skin tone was a bit blue. If it was blue, could it be because of my skin color being a black woman, and his father being German? The next day we sat in the examination room with the chief cardiologist who didn’t utter a word as he examined Marc’s tiny chest by ultrasound. This went on for thirty minutes. Nonetheless, I believed that everything was fine because I had been told for nine months that everything was fine. Looking at my baby, he had 10 fingers and 10 toes and he was beautiful. Finally, the cardiologist spoke to my husband–I didn’t speak German at the time. My husband, Helmut, responded by slapping his hand on his forehead and slumping in his chair. I anxiously asked him what the cardiologist said. He looked up at me, with tears in his eyes and said that there was something wrong. I stepped over the edge to hysteria. We had to leave Marc in the hospital overnight for the doctors to carry out more tests including a heart catheterization. I didn’t even know what that was. Some kind of way we got through the night and went up to the clinic the following morning. I had been telling myself that it couldn’t be that bad. I thought maybe this was just a German way of double checking or whatever. The results of the catheterization were heartbreaking. It confirmed that Marc was born with two chambers in his heart instead of four. He also had a condition where the internal organs were on the opposite side of the body and instead of having one spleen he had many. That was actually a good thing because that would help him fight infection. So anyway, the cardiologist said that my son was born with only half of his heart and that we should let him die. I could not wrap my head around that and I was screaming and crying. He stopped me dead in my tracks because he could speak a bit of English. He just looked at me and he said “there’s no hope for him, he cannot survive, he cannot thrive, he was born incompatible with nature.” That’s where I got the title of the book from. That was the most heartless thing to say. I thought, am I some sort of freak? I just didn’t understand how one person could give life to another “born incompatible with nature”. So that’s how my odyssey began.

How is Marc now?

Thank God, he’s 35 years old and he of course takes medication but he also flyboards, he skis, he swims, he’s in love, he has sex, he works at a job he loves and he basically lives a normal life. He works out several times a week, he’s very in tune with his body, he watches what he eats, and he has a good outlook on life. I’m just so blessed that he’s blessed. 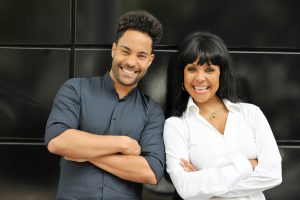 You’re not with your husband anymore?

No, and this is the next story….I left him after 24 years of marriage. It’s often the case that when people have a child that is born with a problem or disease, that a terrific strain is put on the marriage. It’s often disastrous these marriages, but our separation had nothing to do with Marc’s illness. So, no I’m no longer with him and as a matter of fact I fought him for my divorce for five years and then I didn’t hear from him for a couple of months. I thought, oh god what is he doing now. I found out that he died. He fought me until he died. That’s what my next book is about. I’ve already started writing it. It also has the same theme, a woman being strong, and landing on her feet. I was in his country, he was the breadwinner and I was a stay at home mom. I was a typical housewife. I never worked and I’m ashamed to say that I didn’t know how to pay anything other than a grocery bill. When I realized that I could no longer stay with him I had to get out and jump in the water and it was truly sink or swim. Sinking just was not an option. This book too, is also about never giving up and believing that defeat is not an option. Just as proud as I am with the first chapter of my life with Marc, I’m extremely proud of myself with the second, because I don’t know too many women who couldn’t have survived a tumultuous divorce in a foreign country the way I did.

Your son should absolutely idolize you.

To be honest, Marc was actually his daddy’s boy. I think the reason for that was because my husband was gone at work all day and I was the head person in charge. Marc did you do your homework, Marc did you feed the dog, Marc did you take out the garbage?”, this kind of thing. I was the disciplinarian and when my husband came home it was all fun and games. But Marc respects me very much and he’s very appreciative of all that I’ve done.

Were you afraid to have another child, or you just chose not to?

I wanted to, and in fact I tried when Marc was about four or five, but it just didn’t work. I went to a geneticist and also my internist and they said that maybe there was a one percent chance that this cardiac problem would happen again…. finally, my internist told me that he believed that my brain was not willing to accept me being pregnant because I was afraid of being pregnant again. That was good enough for me, sometimes you just have to leave well enough alone. So, it just never happened again. 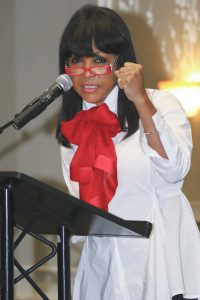 Why did you write the book?

I didn’t plan on writing this book. It all really began when I was taking notes that first time I had to bring Marc in the hospital. I didn’t understand the language and nobody spoke English except for one doctor, but he wasn’t holding my hand 24/7. So, I took notes. I would write down the names of medications Marc was given and when; mind you, there was no cell phone, no Google translate, none of that. I had a German/English dictionary with me and I would just write down things. The nurses must’ve thought I was out of my mind because there I was cuddling, nursing and singing to this baby that was going to die. I just blocked them out and continued to take notes. So I thought to myself that if I could survive this, I owe it to other people to write this book and share my experience in the hope that I could help somebody else facing a mountain of adversity. Now that the book is here, it’s my intention to really inspire parents to not give up. Be active in their healthcare. I want doctors to have a little bit more empathy when dealing with their patients. I know that what I went through with the Germans was extreme back in the day, but nonetheless I don’t think a whole hell of a lot has changed the world over. Doctors need to learn to have have more empathy and when weighed down with stress and feeling they can’t go on, they need to keep their eye on the prize and continue to be remarkable because that is where miracles happen. And to do that, they’ve got to just never give up. That’s really what my message is. It doesn’t matter what obstacle is facing you in life, never give up. The worst question to bear would be, “What if I had done more?”

Purchase “Incompatible with Nature – A Mother’s Story” on Amazon here:

The official website for Tracie Frank Mayer may be found at https://www.TracieMayer.com
For interviews or more information contact worldstarpublicrelations@gmail.com