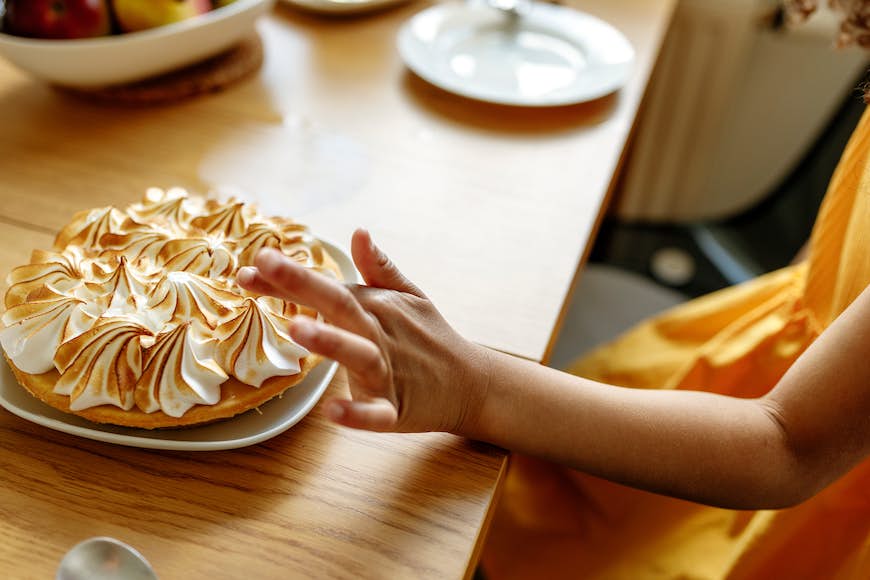 I’ve never forgotten the lineup of pies at Gray Brothers Cafeteria in Mooresville, Indiana, 10 miles south of Indianapolis International Airport. As a child growing up in nearby Bloomington, an excursion to Gray Brothers, where there’s always pie for dessert, was an extra special treat. And it’s the pie that still draws me to this Indiana institution whenever I’m back in the Hoosier state.

Get local insight on destinations all over the world with our weekly newsletter delivered to your inbox.

With more than 400 seats behind its limestone facade with a steeply pitched roof and dark wood beams, Gray Brothers, which opened in 1944, is just one of the cafeteria-style restaurants that remain popular across Indiana. As Indianapolis-based author Sam Stall notes, “Indiana seems to have this weird proclivity for cafeterias.”

Indiana has plenty of old-school diners, like The Oasis in Plainfield or Nick’s Kitchen in Huntington, serving all-day breakfasts alongside classic Hoosier dishes like pork tenderloin sandwiches, the fried breaded meat overflowing out of its bun. The state has soul-food restaurants drawing on Black culinary traditions and all-you-can-eat buffets, including the Amish-owned Blue Gate Restaurant in Shipshewana, where for one price, you can fill up on soups, roast beef and mashed potatoes.

But for many Hoosiers, like Stall and me, cafeterias hold a special place in our hearts. You pick up a tray and slide it along the metal railing, and the bounty of options is arrayed along the line for you to choose: salads, hot dishes, vegetable sides, and freshly baked rolls, cakes, and pies – especially pies. You help yourself to the cold dishes, which are pre-plated and set behind glass partitions. As you move down the line, servers stand ready to scoop up your requested main dish and its accompaniments, handing you a heaping plate.

“You get to see what you’re going to eat before you order it,” explains Casey McGaughey, president of MCL Restaurant & Bakery, which his grandfather Charles founded as MCL Cafeteria in 1950. “You can shop with your eyes.”

“For an entire generation, or maybe two generations, this was a perfect substitute for that mythical meal at grandma’s house. It was the ultimate comfort food,” says Stall, who researched the state’s steam table eateries and their classic dishes for his book, Tray Chic: Celebrating Indiana’s Cafeteria Culture.

Cafeterias aren’t unique to Indiana. Like many states across the US Midwest and South, Indiana was once home to numerous cafeteria-style eateries.

One of the first launched in Indianapolis in 1900 as Laughner’s Dairy Lunch. The Laughner family eventually operated a dozen Laughner’s Cafeterias in Indiana. By the mid-1900s, its dining rooms were decorated in a faux Tudor style, but its homey menus were not much different than what cafeterias still offer today. Laughner’s operated in the region for more than 100 years.

In the mid-20th century, when the food industry focused on efficiency and mechanization, cafeterias were seen as an innovative high-tech way to deliver food, says McGaughey. They also served a broader population at a time when dining out had been reserved for the wealthy. “A big key in the founding of MCL was to bring good affordable food to everybody.”

Among the 13 locations that MCL currently runs in Indiana, Illinois and Ohio, their Indianapolis branch at 10th St and North Arlington Ave has been serving for 70 years, the chain’s oldest still-operating location.

Indiana was also once home to Jonathan Byrd’s, which claimed to be the largest privately owned cafeteria in the US. Stall recounts that founder Jonathan Byrd secured admission to the Cornell University School of Hotel and Restaurant Administration with an essay on the symbiotic relationship between the US interstate highway system and cafeteria-style restaurants. In the pre-fast-food era, Byrd proposed that drivers could pull off the highway at a roadside cafeteria and quickly load up their plates with a full, homemade meal.

Byrd didn’t stay long at Cornell. The budding entrepreneur returned to Indiana to open a cafeteria in Greenwood, on Indianapolis’ south side. Following his own advice about the best location for cafeteria-style eateries, he located his new restaurant near Interstate 65. Byrd’s operated from 1988 until 2014.

What to eat on the cafeteria line

Fried chicken is the must-try main dish at Indiana’s cafeterias. Both its light- and dark-meat versions are among the most popular dishes at Gray Brothers and MCL. This crunchy-skinned poultry that somehow manages to stay crispy on the cafeteria line is a Hoosier staple, long served in farmhouse kitchens and at family dinners on Sundays after church. Even the founder of KFC, Colonel Harland Sanders, was born and raised not in Kentucky, but in Indiana.

Another popular cafeteria plate, according to Indianapolis-based food writer Jolene Ketzenberger, is a roast beef Manhattan. To make this open-faced sandwich that locals claim was invented in Indianapolis, you start by piling sliced roast beef on white bread. “You cut the sandwich in half diagonally,” she explains. “Scoot those diagonals apart. Then you put a scoop of mashed potatoes in the middle, and you pour gravy over the whole thing. And that’s a roast beef Manhattan.”

“It’s not a pickup sandwich,” she cautions. “It’s a knife-and-fork sandwich.” There’s a turkey version, too, with roast turkey substituted for the beef.

On Indiana’s cafeteria lines, you’ll also find hot dishes like meatloaf, chicken and noodles, and fried catfish, along with an array of homestyle sides, including macaroni and cheese, mashed potatoes and gravy, green beans, and collard greens. Diners aren’t lining up for anything “terribly complicated or esoteric,” says Ketzenberger. They’re hungry for traditional homemade dishes, served in hearty portions.

There are green salads, but for many people, they’re not worth the space on your tray. Why eat lettuce when you can dig into fruit-filled Jell-O? “I don’t know how Jell-O salad became a thing,” Ketzenberger says, “but Jell-O salads are always on the cafeteria line.”

Warm rolls are always available, or you might choose a fresh-from-the-oven cinnamon bun.

And pie. So many pies. “That’s the dessert that cafeterias are known for,” says Ketzenberger. She suggests sampling two Indiana pie specialties, if you can find them: sugar cream pie, a custard-filled pastry that’s unofficially been dubbed the state pie, and persimmon pudding, normally a late-autumn dessert. “Persimmon pudding isn’t really a pudding like chocolate pudding. It’s more like a British pudding, like a really moist cake. It’s very Hoosier. And it’s delicious with whipped cream.”

Not all Indiana cafeterias follow the fried chicken-and-cream-pie model. Russian immigrants Louis and Rebecca Shapiro moved to Indianapolis and opened a small grocery store in 1905. By 1940, when their sons took over the business, it had begun its transformation into the kosher-style cafeteria now called Shapiro’s Delicatessen.

According to Shapiro’s president, Brian Shapiro, their location on Indianapolis’ south side was once the hub of a vibrant Jewish community. The cafeteria format worked, particularly during the labor shortages of the World War II era, when the family couldn’t find enough staff for table service.

The first hot dish that Shapiro’s served is still on the menu: spaghetti and meatballs, made from Rebecca Shapiro’s recipe in a heavier, Russian style and using different spices than an Italian–American version. While Shapiro’s isn’t strictly kosher, the meatballs contain beef but no pork or cheese, in keeping with Jewish dietary rules. Brian Shapiro says, “It’s more of a meatloaf meatball.”

These days, Shapiro’s dishes out deli classics, from matzoh ball soup and bagels and lox to chopped liver and stuffed cabbage. They’re known for overstuffed sandwiches, including corned beef, pastrami and brisket. The family runs a quick-serve Shapiro’s at Indianapolis International Airport as well.

In 1988, food writers Jane and Michael Stern wrote in The New Yorker that “many cafeterias are helping to preserve a regional cuisine that is unadulterated by faddishness.” With steady lines out the door at Indiana cafeterias like Gray Brothers, MCL and Shapiro’s, this statement seems as true today as it was more than three decades ago.

Yet Stall worries that this Hoosier food tradition may be slowly dying, with just these few popular cafeterias remaining. In the same way that you shouldn’t put off visiting an elderly family member, “if you want to have another cafeteria meal, do it now,” he advises. “It’s not a 21st-century mentality. The stuff they’re serving is the same stuff you would’ve gotten in 1980 – or 1880.”

But plenty of others think that Indiana’s long-running cafeterias are here to stay. After all, as MCL’s Casey McGaughey says, “everything’s better with pie.”

Bob’s Burgers, Family Guy, and The Simpsons Renewed for 2 More Seasons at FOX
The Property Brothers & Tony Hawk Make ‘SNL’ Cameo In Miss Universe Sketch: Watch
Pusha T Posts Bible Verse After Consequence Slams His Kanye West Loyalty
Where are the safest places to travel in 2023? It depends on how you define ‘safe’
8 of Morocco’s best beaches for surfing, swimming and sunbathing