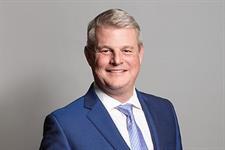 Stuart Andrew MP has been named as the new minister for civil society.

Andrew will be responsible for charities as part of his role at the Department for Digital, Culture, Media and Sport, according to the government website.

He was elected to parliament in 2010.

In addition to charity policy, Andrew’s brief will include sport and tourism, loneliness and youth. He will be a minister for equalities at DCMS.

He has previously been a government whip, a housing minister and a prisons minister.

He is the ninth civil society minister in 12 years.