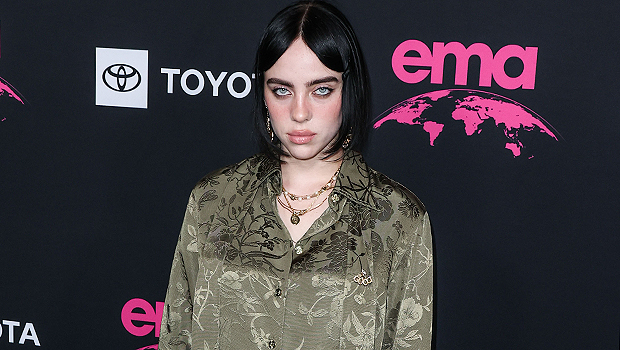 Billie Eilish, 20, went Instagram official with her musician boyfriend Jesse Rutherford, 31, after Halloween weekend. The “Bad Guy” singer posted a series of photos from the spooky holiday that included a snapshot of the couple dressed up as baby and an elderly man, poking fun at their 11-year age difference. Billie also shared a video of The Neighbourhood lead vocalist goofing around in a clown costume. She captioned the post, “life is craaaaaaaaaaaaaaazy🤡 happy halloween🎃🥰.”

Billie and Jesse’s Halloween costumes let the haters know that they’re in on the jokes about their relationship. Billie wore a bonnet, a bib, and doll makeup to transform into a baby, while Jesse wore prosthetic makeup to look the part as an old man. Fans had big reactions to the costumes on social media, with some calling them “creepy,” while others laughed along with Billie and Jesse for trolling the haters.

The couple first sparked dating rumors in the middle of October when they were seen holding hands as they attended Halloween Horror Nights. Just days later, they confirmed the relationship by full-on making out in front of paparazzi cameras, before they enjoyed a cozy dinner date at Crossroads Kitchen in Studio City.

“Billie and Jesse both appeared very happy to be there,” an eyewitness at Crossroads Kitchen told HollywoodLife EXCLUSIVELY following the pair’s dinner date. The insider went on, “They would look each other in the eyes when speaking, and they were joking and laughing throughout the night. It was obvious they were close, and they appeared very comfortable with each other. It seemed like a typical date night.”

What to Watch: Gossip Girl, Firefly Lane, Irreverent
From stage to page
Bob Pisani: Heeding the investment wisdom of Jack Bogle starts with keeping it simple
Kanye West Storms Out of Podcast Interview After Pushback on Antisemitism
Cheval The Edinburgh Grand