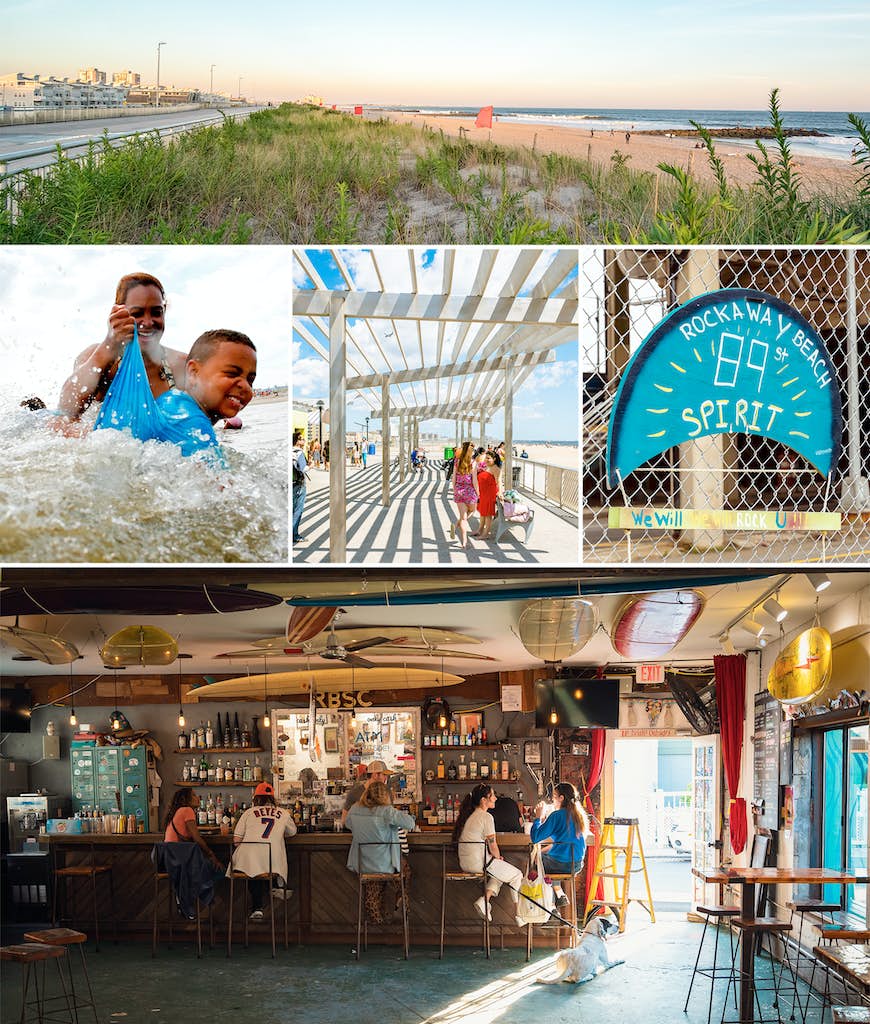 To say goodbye to New York, writer Chris Dong takes an overnight vacation to the beach and finds there’s much to learn in a part of the city he had long only considered for day trips.

Behind a layer of patchy fog, the sun casts a milky glow. It’s just after dawn on a brisk, late-spring morning on Rockaway Beach, a Queens neighborhood sitting on a narrow stretch of New York City between Jamaica Bay and the Atlantic Ocean.

Two people out for a stroll greet me with a cheerful hello. Clearly, I’m not in Midtown Manhattan anymore, where after seven years waking up in the same building, my neighbors remain nameless.

New York City may be known for the anonymity of a crowded street and the spectacle of a towering skyscraper, but this corner of the city is an antithesis to those scenes.

Outlined across the bay, the Manhattan skyline stands just 16 miles to the northwest yet feels a world away. When the summer heat inevitably arrives, city dwellers flock here by subway and ferry, desperate for a reprieve.

Home to 130,000 permanent residents, the Rockaways, encompassing the neighborhoods of Rockaway Beach, Far Rockaway and seven others, receives over five million beachgoers each year. It’s as if between Memorial Day and Labor Day, New Yorkers like myself finally remember they are in fact part of a city on the sea, home to over 14 miles of public beach.

A relaxing break from NYC: the new QC NY spa

I’m here early in the season, when things are quieter. Instead of rushing to catch the last ferry of the evening, I’m spending the night in the neighborhood. A New Yorker for nearly a decade, this overnight experience is one of my final farewells before moving to Los Angeles and breaking a lifelong allegiance to the East Coast. As I make my way down the boardwalk towards 116th Street, a freshly brewed coffee acts as my makeshift hand warmer. While Greenhouse Café, on the ground floor of the Rockaway Hotel, is a relative newcomer to the scene, the owners are not.

The Flatow family has deep roots in the Rockaways with their two outposts of Cuisine by Claudette, named after the matriarch of the family, Claudette Flatow. From filling my caffeine fix with a smooth Peruvian drip in the morning to biting into the perfect eggplant sabich in the afternoon, I take advantage of the Flatows’ talents, something they’ve shared with the Rockaways community since 2012.

Get local insight on destinations all over the world with our weekly newsletter delivered to your inbox.

As I’d come to experience during my “staycation” on the peninsula, the people that live on Rockaway Beach are proud of the place they call home. At Claudette’s and elsewhere, this is an everyone-knows-each-other beach community where locals greet each other by name.

Even the recently-opened Rockaway Hotel, a 53-room upscale property steps from both the ferry and the beach, was the creation of third-generation Rockaway Beach residents, Terence and Dan Tubridy. Each week, the hotel invites a rotating array of local Rockaways restaurants, such as Whit’s End and Pizza D’Amore, for their “Dinner and a Band” series.

Waking up in the same city, but in a new place

There’s something special about waking up in a new neighborhood so unlike your own, while still within the city limits. Instead of worrying about the logistics of travel, I felt more tuned into my surroundings: the swish of waves hitting sand, the frenzied energy of fishermen preparing for a morning at sea, and the quiet conversations of elderly residents on morning walks.

Before this overnight escape, I’d come to the area before, spending most of my time at Riis Park Beach, a queer enclave on the western Rockaway peninsula. From bumping beats to people-watching galore, the daytime vibe there feels like nightlife with sunscreen. It only took a handful of visits to create a routine: find a spot on the sand with friends, watch the day disappear, make a quick pit stop for afternoon fish tacos at Tacoway Beach, catch the ferry back to the city.

As I wake up on Sunday morning and emerge into the quiet fog, I walk past the dunes, watching surfers take their positions along the coast, eager to find that magic carpet ride to shore. A Delta jet, seconds after takeoff from JFK’s Runway 22, soars low over 90th Street.

To see this place before the daytrippers arrive feels, even just for those few hours, as if I live here.

I’ve been to nearly every NYC rooftop bar: these are the 15 best

Experiencing a place as a local

In the Rockaways, the deep roots of community extend beyond friendly hellos and early morning surf sessions.

For dinner, my friends and I eat at Whit’s End, an Italian restaurant that in just a few years has become something of a Rockaways institution. It’s the type of place that could also pass for a jazz club, speakeasy, sports bar and burlesque venue – all in one.

The handwritten menu features dishes like the “fucking good burger” and “quick ass ceviche.” Everyone seems to know each other. An inebriated regular dances beside the bar while the waitress grabs a chair, sits at our table and reads out the specials.

The Detour: How to explore Central Park in New York City

A goodbye to a place that I’ve called home

Before returning to Manhattan, I go for a final journey down the boardwalk. This time, it’s by bike. Back in Midtown, I have to gingerly weave through traffic-filled streets, dodging drivers who think they own the road.

But here, on the boardwalk, I bike with a sense of abandon. I don’t mind that my beach cruiser’s seat is set nearly a foot too low for me. Instead of pungent car exhaust, there’s an invigorating, stiff sea breeze. And instead of a precise focus on the path ahead, I fix my gaze above as yet another plane passes.

8 of the best vegan restaurants in NYC

Just when I feel myself vanishing into the kind of half-dream state brought about by beach towns, I’m reminded that this place is still very much New York City. To my left, the A train – the same one that stops at Penn Station in the heart of Midtown – rumbles past on elevated tracks. Piercing through the constant call and response of seagulls, I hear the familiar screech of an MTA bus braking.

Greenways and bike shares: top tips for cycling NYC like a pro

After an overcast weekend, the first full rays of sun peek out from behind the clouds. Warmth, light and endless blue sky are some of the reasons why I had decided to relocate to Los Angeles. I had come here, in part, to say goodbye. And here was New York reminding me of just how magic it is, when that sunshine cuts through days of gray skies.