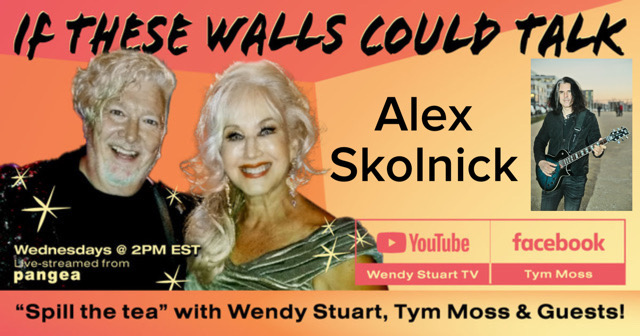 Who else but hosts Wendy Stuart and Tym Moss could “spill the tea” on their weekly show “If These Walls Could Talk” live from Pangea Restaurant on the Lower Eastside of NYC, with their unique style of honest, and emotional interviews, sharing the fascinating backstory of celebrities, entertainers, recording artists, writers and artists and bringing their audience along for a fantastic ride.

Alex Skolnick will be a featured guest on “If These Walls Could Talk” with hosts Wendy Stuart and Tym Moss on Wednesday, March 23rd, 2022 at 2 PM ET live from the infamous Pangea Restaurant.

Wendy Stuart is an author, celebrity interviewer, model, filmmaker and hosts “Pandemic Cooking With Wendy,” a popular YouTube comedic cooking show born in the era of Covid-19, and TriVersity Talk, a weekly web series with featured guests discussing their lives, activism and pressing issues in the LGBTQ Community.

Alex Skolnick is both an original member of Bay Area metal outfit Testament (which he joined at age sixteen) and a respected New York improviser of multiple styles. Emerging as one of the original melodic thrash guitarists (alongside Marty Friedman), Alex later moved to New York and earned a BfA in Jazz from The New School, studying with such prestigious artists as George Garzone, Cecil McBee and Reggie Workman.  Now a longtime resident of Brooklyn New York, he has gone on to release several critically acclaimed albums with the Alex Skolnick Trio, described as thus by jazz journalist Bill Milkowski: “Skolnick runs the guitaristic gamut from lush chord melodies to Wes Montgomery-style octaves to screaming Sonny Sharrock-esque skronking” (Downbeat Jan 2017).  In 2005, he reunited with Testament, the impact of which has eclipsed the band’s initial run).  When not supporting the likes of Slayer and Megadeth on tour with Testament, Alex can be found headlining The Blue Note in Milan, Agharta in Prague, New York’s Iridium or various elegant venues across the world. He is also a first call player for jazz/rock projects including the Stu Hamm/Alex Skolnick/Chad Wackerman power trio, Jane Getter Premonition featuring alumni from Pat Metheny Group (Mark Egan) and Miles Davis (Adam Holzman), as well as “Celebrating Allan Holdsworth,” in which Alex is one of several guitarists with the prestigious position of filling in for the late, great innovator at a series of shows with his (Holdsworth’s) touring band.

Alex is also the leader of the critically acclaimed world acoustic project, Planetary Coalition (featuring various international artists from across the globe including Rodrigo Y Gabriela and Horacio “El Negro” Hernandez)   In 2016, Joe Satriani chose Alex (his former pupil), to be a primary guest instructor at his annual G4 Experience, alongside Eric Johnson, Mike Keneally and Steve Vai, followed by by a stint as the sole guitarist on faculty at Warwick Bass Camp, in which he taught and played alongside Alphonso Johnson (Weather Report) and Dennis Chambers (John Scofield/John McLaughlin). For ten years he was a featured touring and recording member of the Trans-Siberian Orchestra. As an an educator and speaker, Alex has been invited to give keynote addresses at academic events such as Dayton University’s Metal and Cultural Impact conference as well as joining various PhDs at the International Society for Metal Studies in Helsinki. As a writer, Alex is an editor and contributor to UNBUILT, a biannual lifestyle and cultural magazine that includes his friend and fellow “metal intellectual,” D Randall Blythe (vocalist of Lamb of God). He has also written for The Talkhouse, Guitar World, Guitar Player New Lines and other publications

Alex has his own line of ESP signature guitars and is featured on the back cover of ESP’s 2017 catalogue (Metallica’s James Hetfield is on the front).  Whether carefully listening and playing alongside the world’s top instrumentalists or loudly shredding with Testament or Metal Allegiance (the Nuclear Blast signed supergroup of which he’s a core writer and producer), it’s safe to say that Skolnick has found his own niche as a guitarist. “Though he’s pretty much a household name in heavy metal, Alex defies categorization by musical genre.” (Making Music, Jan 2015)

Watch Alex Skolnick on “If These Walls Could Talk” with hosts Wendy Stuart and Tym Moss on YouTube here:

Jack Tracy Guests On “If These Walls Could Talk” With Hosts Wendy Stuart and Tym Moss Wednesday 8/10/22 2 PM ET
‘I work just 5 hours a week’: This 39-year-old makes $160,000 a month in passive income—a look at his typical day
Jury Orders Alex Jones to Pay Sandy Hook Parents $49.3 Million in Damages [Updated]
Criminal Minds Spoilers: Everything We Know About the Revival
Using Nonfiction Comics for Learning