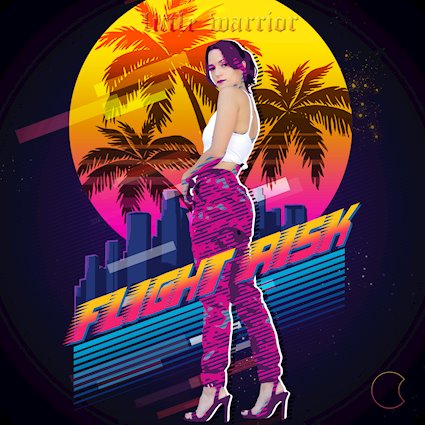 Little Warrior is a vocalist and electronic music producer who, after the success of her first EP Lovesick on Spotify, charting on iTunes and having her tracks appear on movies such as Debt Collectors and Run, Run, recently released her first full-length album on Blue Dot Studios. Flight Risk sees Little Warrior’s signature style really take off with lashings of lo-fi, trip hop and 90s chillwave anchoring her angelic voice.

Little Warrior has a style that sort of straddles a number of styles. On the more indie end of the spectrum, some of her work on Flight Risk may remind listeners of FKA Twiggs, especially the track “Turn Around” featuring BaOS and it’s accompanying video. On the other hand, she has a real pop cachet but of course it’s the contemplative side of pop, a’la Billie Eilish or Lana Del Rey.

Having been featured quite often on EDM compilations such as Beautiful Vocal Trance and Best Vocal Progressive Trance, Little Warrior may have felt pigeonholed and it may have led her to try something new with more pop and lo fi style, but it seems to have paid off in spades on Flight Risk. Having done almost all the production herself lends a real personal touch to the music that’s grounded in trip hop and heavy bass but soars at just the right points with her strikingly light, ethereal vocals.

Some of the tracks like “Never Do” and “Over” are heavy on the bass synth, aiming at a throwback space similar to 80s synth pop or maybe Sneaker Pimps. Other tracks are much more straightforward and pop-inspired, like “Back & Forth” and “Turned to Never.” Still others take on their own indefinable quality, combining low and high registers such as “Sad that I Left.” Lyrically, the whole album seems to be about the trials and tribulations of love, the heartache the games and the question of whether or not it’s worth it. The album is contemplative and tells a strong story that anyone who’s had a relationship go sour will likely relate to.

Little Warrior is far from a new artist to those who know her and with Flight Risk she’s stepped up her game even more, expanding her style and, quite likely, her audience.

Flight Risk is out now and can be streamed or purchased by clicking here.

How Italy’s high-speed trains helped kill Alitalia
Action for Children records rise in fundraising income despite pandemic
Rami Malek‘s a Killer SNL Host, But Bowen Yang Stole the Show
The Eye of the Storm
Will There Be a Fourth Season of Succession for the Fans?