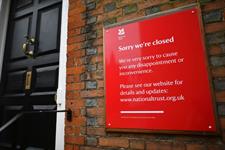 The National Trust has announced plans to make up to 1,200 people redundant as it expects to lose almost £200m this year as a result of the coronavirus crisis.

The conservation charity hopes to save £100m – almost a fifth of its annual spend – through changes to its operations and reductions to payroll and budgets.

Nearly 40 per cent of the proposed savings (£40m) will include non-pay spending cuts, renegotiating contracts, and introducing more efficient processes to manage key areas of the charity.

The trust has previously announced plans to stop or defer £124m worth of projects, and introduced a recruitment freeze to reduce its staff costs.

To help it get through the short-term impacts of the crisis, the charity furloughed the majority of its staff, drew on the Bank of England’s emergency coronavirus loan scheme, and is reviewing other rescue and stimulus packages being offered by the government.

The trust has drawn up a plan to restart its strategy from March next year. But to do this, the charity says it must be “leaner and more flexible, and reduce its operating and project costs.”

The plan and proposed redundancies, which are being discussed with its union Prospect, are now subject to a 45-day consultation period.

The charity says the reorganisation will allow it to continue the ambition it set out in January to step up its battle against climate change – becoming carbon net zero by 2030 – and will refocus its efforts to protect cultural heritage, with limited cuts to staff caring for houses, gardens and collections.

Hilary McGrady, director general at the National Trust told staff: “It is with huge regret that I am telling you today about the need to cut jobs. We would not be making these savings had we not exhausted every other possibility. We need to act now to ensure we are sustainable in the future.”

While the measures have helped reduce the financial impact of Covid-19 on the trust, McGrady explained that short-term hit, coupled with the longer-term implications of social distancing and suppressed trading, meant there was a need for a full review of the organisation’s spending and priorities.

She also pledged the trust would ‘grow back stronger’ in the future, stepping up its efforts to help the nation get the rest, recuperation and recreation it needs.

“Our focus will remain on the benefit we deliver to people, every day. In making these changes now, I am confident we will be well-placed to face the challenges ahead, protecting the places that visitors love and ensuring our conservation work continues long into the future.”

McGrady added: “We expect to work more in partnership with other charities and with local communities, and to fundraise more in the future.

“At a time of climate crisis, it is essential that conservation charities make the case for donations of money and time, so the nation can face up to the challenges ahead.”

Alibaba expanded during the SARS health crisis — and its co-founder has advice to share
Naomi Osaka Is Leveling the Playing Field
‘Cocoon’ and ‘Natural’ actor Wilford Brimley dead at 85
As Award Shows Go Virtual, So Do The Gifting Suites
Kanye Files for Presidential Ballots with Michelle Tidball Listed as VP, Misses Deadlines