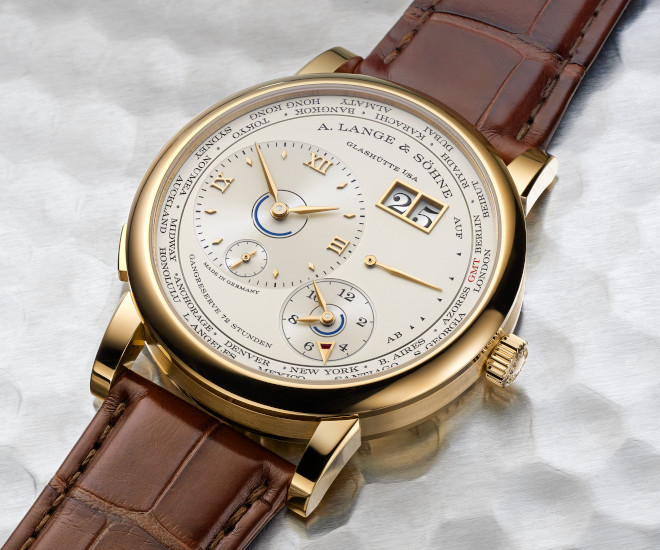 The new edition of the LANGE 1 TIME ZONE in yellow gold is equipped with a champagne-colored dial and a medium brown leather strap and limited to 100 pieces. It measures 41.9 mm in diameter and is 10.9 mm high.

Every great magic trick consists of three parts or acts. The first part is called “The Pledge”. The magician shows you something ordinary: a deck of cards, a bird or a man. Perhaps he asks you to inspect it to see if it is indeed real, unaltered, normal. The second act is called “The Turn”. The magician takes the ordinary something and makes it do something extraordinary. But making something disappear isn’t enough; you have to bring it back. That’s why every magic trick has a third act, the hardest part, the part we call “The Prestige” – Christopher Nolan’s 2006 film, The Prestige

Originally released as part of Lange’s first collection in 1994, the Lange 1 was the Saxony Manufacture’s “pledge”. They took an ordinary watch and through an asymmetry guided by the principle of golden ratios, went on to spawn nine variants including everything from a Tourbillon Perpetual Calendar to the popular Grand Lange 1. Then, it followed up with an act of extraordinary mastery in 2005 called the Time Zone, it was the maison’s second act. Today, the Lange 1 Time Zone receives its first technical update since it was first launched 15 years ago. The new  2020 edition of the Lange 1 Time Zone retains the 41.9mm proportions of the original Lange 1 Time Zone but adds the practical functionality of daylight savings time indicator, simple but immensely useful tool for anyone who travels often to countries which still use the archaic practice. 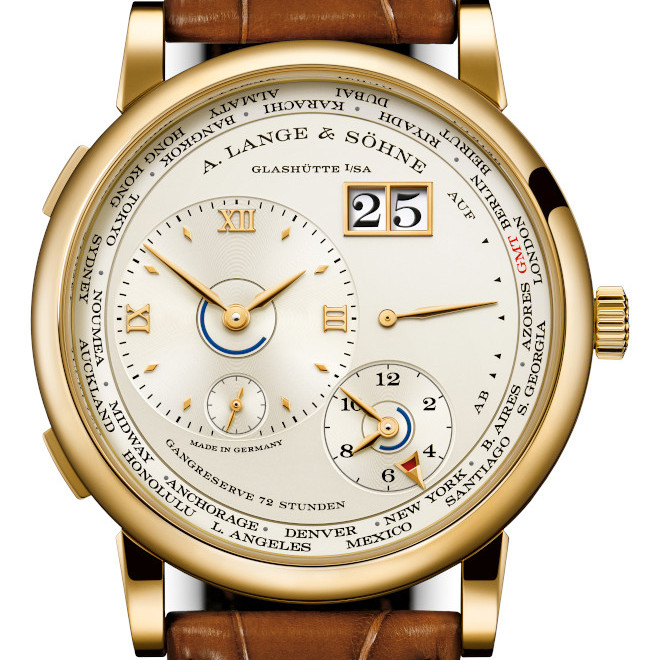 The predecessor Lange 1 Time Zone from 2005

Despite the inclusion of an additional daylight savings reminder, the face of the new Lange 1 Time Zone looks pretty much unchanged without a side-by-side comparison but put the two together and the most noticeable change is the inclusion of two independently operating ‘sub-dials’ each hidden within two of the main dials. These disks indicate day and night, rotating once every 24 hours, an hour hand over the blue arc indicates PM for that time zone; these are the surest signs that beneath the argenté and black dials, lies an entirely different calibre driving these sophisticated timepieces.

The new edition of the LANGE 1 TIME ZONE, presented in June 2020 and equipped with a new manufacture calibre L141.1, combines functionality with clear readability. The time and date at home and another of the 24 zone times can be read at one glance. Ring-shaped day/night indicators assure good legibility and the new daylight saving time indication is a useful addition.
The LANGE 1 TIME ZONE is available in pink gold with an argenté-colored dial, in white gold with a black dial and in yellow gold – limited to 100 pieces – with a champagne-colored dial. It measures 41.9 mm in diameter and is 10.9 mm high.

With nine assorted hands and pointers, and five dials, a dual timezone watch like the original Lange 1 Time Zone was never an easy watch to pull off design-wise. Though executed with much aplomb in 2005, the new Lange 1 Time Zone for 2020 creates a visually cleaner watch, and even if the raison d’etre of watchmaking today is one of fine arts, an easier to use dual timezone watch is always welcome. 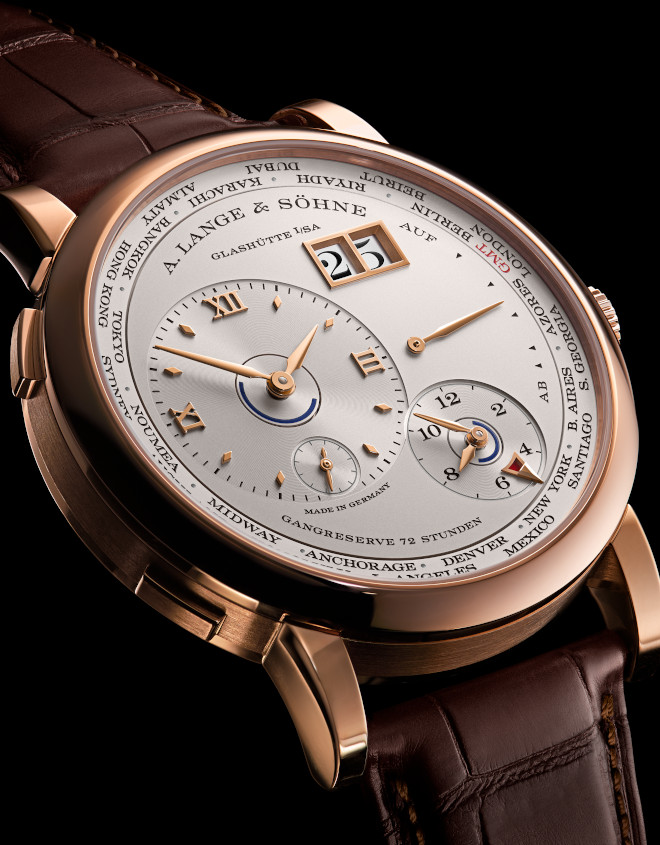 Thoughtful decisions allow the Saxony manufacture to give the new Lange 1 Time Zone an additional daylight savings time reminder unobtrusively, while I’m not certain this means lovers of the current edition will give up their predecessor models for the 2020 edition, the new Lange 1 Time Zone is certainly a monumental update from a technical and visual perspective. Seriously, how do you add one extra indicator to the myriad of hands and dials yet make it more discreet? It’s a contradiction of terms and this is The Prestige.

While the older model expresses day and night in separate subdials, the new Lange 1 Time Zone offers a visually sophistication solution by “hiding” subdials via discs rotating around the central axis of hands. Furthermore, a recent Zoom presentation hosted by Lange’s Director Of Product Development Anthony de Haas explained the city pointer which referenced the city on the city ring on the previous iteration, now also hides a small window within the pointer to denote whether the respective city uses Daylight Savings Time or DST. Cities that do not use DST are indicated in white while red fills the window for cities that do. 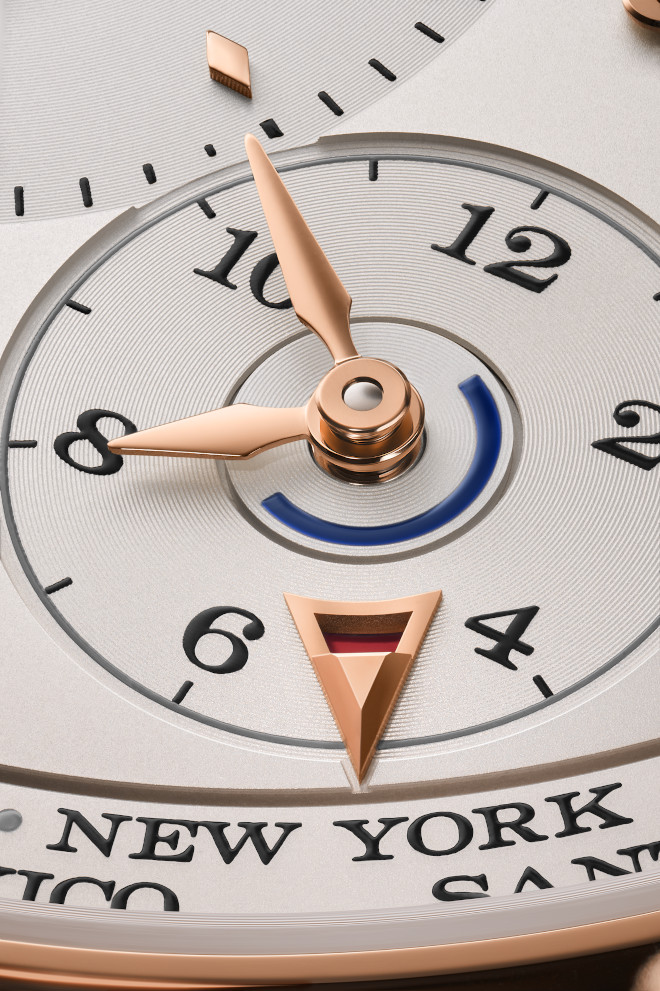 Though not as discreet as its dial layout, the new Lange 1 Time Zone allows adjustment of the city ring in one-hour increments via a pusher at 8 o’clock; functionally, this feature is similar to other timezone complications on the market, moving each of the 24 reference cities for each time zone around the dial in one hour increments. A button at 10 o’clock adjusts big date.

Beneath the surface of the 2020 Lange 1 Time Zone

The nine of the current first generation Lange 1 variants including the Time Zone were derived from the L901.0, the base movement which powered the original Lange 1 in 1994. It was updated once in 2015 with the L121.1 and since then, Lange has progressively updated across the original Lange 1 collection, the new Lange 1 Time Zone is the last watch in the family to receive a new calibre L141.1 , one which accounts for daylight savings at that. 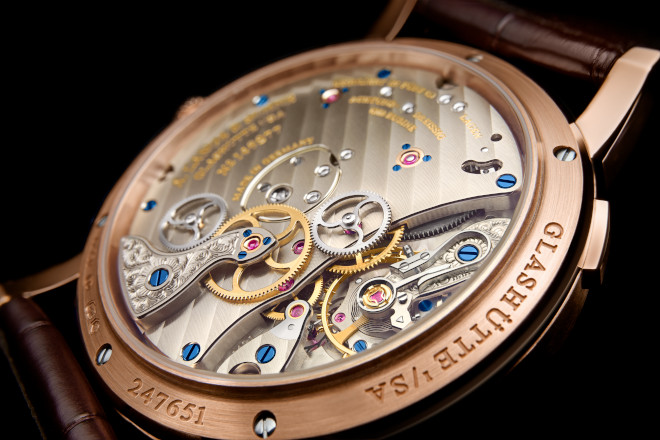 The new manufacture calibre L141.1 retains the unique synchronisation mechanism that makes it possible to transfer zone time from the smaller to the larger dial. This is useful when – during an extended stay abroad, for instance – the user wishes to swap zone time and main time. If the crown is pulled out to the second position, the times of both zones can be adjusted synchronously. But in the process, if the button for setting the second time zone is pressed and held, the hour hand for zone time will stay in its position. Now, the defined new main time can be set independently of zone time. Finally, it may be necessary to correct the outsize date which is connected with main time. This is done with the pusher at 10 o’clock.

Ultimately, the new Lange 1 Time Zone is a distillation of the collective experience accrued with the development of 65 calibres since their revival. 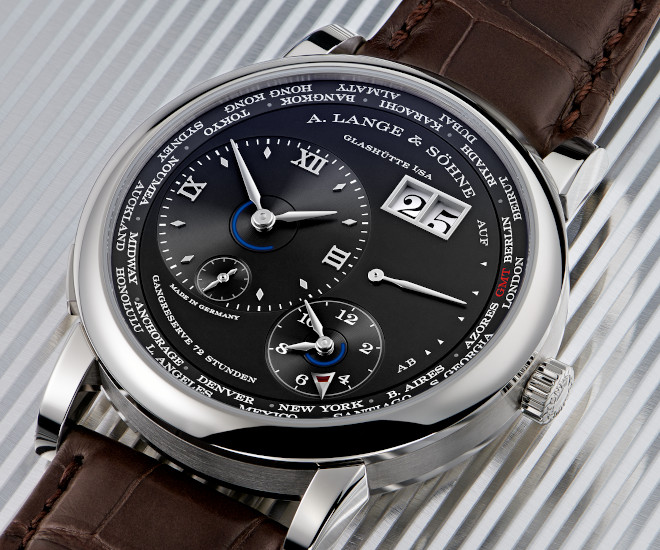 The new edition of the LANGE 1 TIME ZONE, presented in June 2020 and equipped with a new manufacture calibre L141.1, combines functionality with clear readability. The time and date at home and another of the 24 zone times can be read at one glance. Ring-shaped day/night indicators assure good legibility and the new daylight saving time indication is a useful addition.
The model in white gold is equipped with a black dial and a dark brown leather strap. It measures 41.9 mm in diameter and is 10.9 mm high.