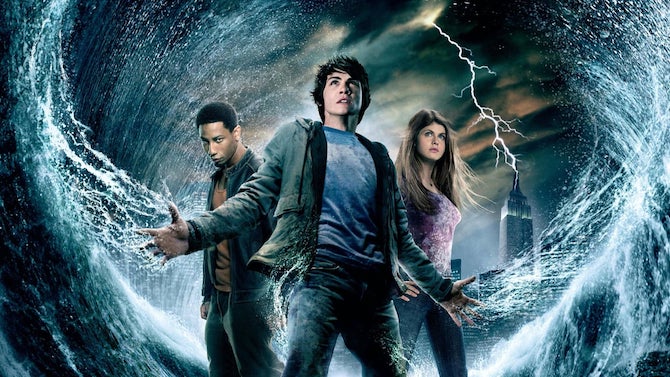 Oh, fanfiction! How I love you, my guilty little pleasure! It is the ultimate outlet for all of my pent-up frustration for What If? and But What About? For Percy Jackson fans, the official Universe is ever-expanding; there are a plethora of opportunities to explore alternate universes or vignettes between books. That’s where the best Percy Jackson fanfiction comes in–like icing between the author’s layers of cake. Word of warning though: Fanfiction is a slippery slope into a very very deep hole. There are some great stories and then there are some absolute tropey tales.

A couple of things to note before we jump into the best Percy Jackson fanfiction:

Also, want more books like Percy Jackson? We got you.

The Torch of Hestia by driftingskies

Takes place before The Lost Hero and after The Last Olympian. It has a great start, true to the feel of Riordan himself. Hestia’s Olympic Torch is missing and she asks Percy and Annabeth to help find it. Action-packed and with a core fight scene, this is a short but sweet start to your fanfic journey.

Honey, Let Me Sing You a Song by HecateA

HecateA seems to specialise in one-shots; from Percy Jackson to Harry Potter, and a few other popular fandoms in between. Her stand-alones are sweet little insights into the characters, which is exactly the kind of fanfiction you want. Honey, Let Me Sing You a Song is one of my faves because it is a romantic play with Aphrodite and touch of music. As a bonus, I also recommend A Third of Life, featuring the best mum of all: Sally Jackson.

Son of the Western Sea by Mac Ceallach (6 Chapters)

Even though this one is incomplete and possibly abandoned, what is here is enjoyable. I especially love the bringing in characters from other mythologies like Shinto and Hindu. Plus, this has a far deeper character development for Percy.

If you’re still looking for some Artemis love, paradoxed has an Artemis/Percy Ship waiting to sail. This one is positively lovely. However, I will warn you now–it will break your heart.

Stretching out from Percy’s immediate world, Firsts is completely focused on Calypso and Leo. It is filled with romantic moments and all the firsts of a budding relationship.

Another story looking at the characters who fill the Percy Jackson universe; this time we are visiting Reyna and Jason, during their college years. It has the usual pairings and romance but quite a bit of fun with friends as well.

The Coming of Nico di Angelo by ninjagirlmai

And now for something a little different: A Percy Jackson/Harry Potter crossover. This is common in fanfiction when fans dream of their favourite characters meeting across multiple universes. I have a soft spot for Nico and placing him in Hogwarts gives him a fantastic opportunity for his better qualities to shine. Chapters 1-43 are the complete story; Chapter 44 and onwards are embellishments.

With the Lights On by nikkiRA

On the other hand, if you want to escape all the fantasy and just dive straight into the relationships and characters, there is no better place to start than with Nico di Angelo. That boy needs some love! And yes, Will Solace is there too.

When Everything Goes Wrong

Purgatory by BloodRedDemon on FanFiction

For a slight horror touch, let’s pretend Percy didn’t come back from Tartarus unscathed. He has come back but it’s not quite the same. And I like a darker twist to things.

No, Annabeth!! How could you?!? How could you choose Luke over Percy?!? Wait, this is fanfiction. Anything is possible. And if you ever wondered what the Percy Jackson Universe would be like IF Kronos had won, then read on.

Change One LIttle Thing and That’s How you Get AU

It wouldn’t be a ‘best of Percy Jackson fanfiction’ if we didn’t include a gender-switch. This one has Percy as female and a bit more interaction with Luke. I think the biggest difference to Percy here, besides the gender-switch, would be the smarts–Percy now has the wisdom of Athena as well. And that’s … well… interesting.

I love Grim fairytales and all the shadows that lurk with them. There is something delicious about the dark potential of Percy in the world of Godfather Death. Poseidon has left Percy in the care of Hades, as a way to appeasement His Sulkiness after the Broken Oath.

Champion of the Sun (complete) by Avarianus

This is so good, it has two sequels, Trials of the Sea and Harbingers. It starts with Apollo raising Percy as his champion, and already you know that won’t bode well. There is far more involvement from Artemis and her Hunters but the highlight for me will always be the interactions with Apollo. I’m a simple nerd.

Thalia Grace & the Olympians: The Lightning Thief by advictorem

Because maybe, just maybe, the best Percy Jackson fanfiction involves Thalia NOT being royally screwed over by her own father.

Even the best-laid plans can throw you a curve-ball. And there is nothing worse than giving it your all and receiving no appreciation for it. For this AU re-telling, Perseus loses it all but is allowed to re-do everything–this time not as the Son of Poseidon but as the Son of Chaos.

The Legacy of Asgard by Anaklusmos14

Another crossover of sorts, however, this one is still within the same Universe; just a different mythos. While we have loved Percy Jackson and the Olympians since the beginning, my entire family was extra excited when Riordan explored other mythologies and legends like Ancient Egyptian and Norse Mythology. The Legacy of Asgard is a bit like that, bringing Percy into the Norse family while still interacting with the Olympians. A beautiful blend of worlds and it is balanced so well with the characters.

A Crown of Golden Leaves by the evilteddybear

The best Percy Jackson fanfiction doesn’t need to stay in the modern world. For some fans, the appeal lies in the history and mythos surrounding these legends; not surprising since they come from the creative mind of a history teacher! Placing Annabeth and Percy in Ancient Rome is a little bit out of the usual fanfiction but it works with both the storytelling and the politics of the time.

The Ancient Greeks were very fatalistic in their ideals of destiny and prophecy. The concept of AU would be easily accepted within many Greek Tragedies, especially when considering whether a horrible twist in one’s childhood could prevent the fulfilment of one’s destiny. In this story, Percy is orphaned and abandoned on the streets by the age of 10. Despite his bitter view on life, he is still ‘touched by the gods’.

Part of the appeal of Percy is his ‘demi-god’ status. As a demi-god, Percy still retains some of his humanity, allowing for character flaws and risks to be taken. Move him to an AU where he is a fully-fledged god, and you still have the flaws that come from mythology (because we all know the gods are messed up) but you have an extra level of power to consider too. I know I have already referenced one story from Anaklusmos14 but this is worthy of adding to the list.

Keeping it Real (even with Fanfiction)

Our Bedroom After the War by Rocio Kristal Freytes Martin

This is a very real and almost tangible Percy Jackson fanfic that directly addresses the issue of PTSD; which makes a lot of sense when you consider everything Percy and Annabeth go through in the series.

Now, remember: just like Hades, it is easy enough to enter the world of Percy Jackson fanfiction. The hard part is coming back out again.