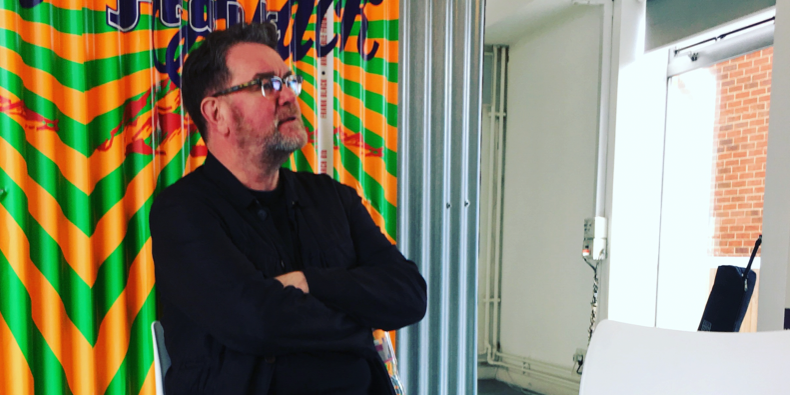 Vaughan Oliver, the graphic designer whose artwork was synonymous with 4AD and its corner of alternative rock, died peacefully this afternoon (December 29) at the age of 62. Representatives for 4AD and the publisher Unit Editions confirmed the news to Pitchfork.

After studying in Newcastle, Oliver moved to London in the 1970s to work in packaging design. But he yearned to apply his visual eye to music, later asserting that, during his small-town upbringing, “the local record shop was an art gallery for me.” After a chance meeting with 4AD founder Ivo Watts-Russell, Oliver became the label’s lone full-time employee in 1983. His distinctive album covers, sometimes abrasive or experimental, others darkly alluring, adorned nearly every record on the label until 1987, through his work with photographer Nigel Grierson as 23 Envelope.

Oliver received full creative freedom and worked closely with band members, notably Pixies’ Black Francis. “There are so many images in Pixies songs it was a dream,” he told Design Week of the partnership in 2016. “I never had to take anything literally—other than Monkey Gone to Heaven—and even that song’s about something completely different; a hole in the ozone layer.” His signature output includes beloved covers for the Cocteau Twins, the Breeders, This Mortal Coil, Lush, and many more.

After retiring 23 Envelope, Oliver operated under the studio name v23, designing for 4AD as well as elsewhere, including work with David Sylvian on albums like Secrets of the Beehive. Despite his broadening client base—he directed several music videos, and TV ads for Microsoft and Sony—Oliver remained on call for 4AD artists like Pixies (after their reformation), TV on the Radio (Return to Cookie Mountain), and Scott Walker (The Drift). He has exhibited work across Europe, in Tokyo and L.A., and at the V&A’s 20th Century gallery, where his work is part of the permanent collection. Unit Editions published Archive, a collection of Oliver’s work, in 2018; a selection can be found at v23’s Cargo Collective page.

Pixies, the Breeders, and Superchunk are among those who paid tribute on Sunday. The Mountain Goats, who enlisted Oliver to design several album covers after signing to 4AD, called the artist “an indispensable part of the label’s identity. You can’t mistake it. It holds a disparate roster together, asserts a shared vision. To know about this back then is to belong to a secret society.”