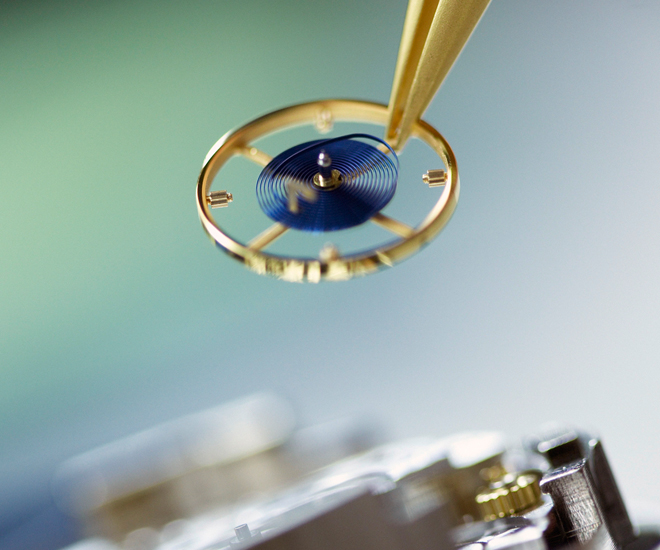 In our story last issue on the balance spring – literally the beating heart of the mechanical watch – it might seem like this component does all the heavy lifting, as far as the back-office business of timekeeping goes. As any watchmaker will tell you though – and a good number of watch brand CEOs too – there is little point in talking up a new balance spring if one does not also address the balance wheel, and indeed the lever that impulses the system. In this story, we’ll be looking mostly at the balance wheel itself, with a few forays into the history and workings of verge, détente and Swiss lever escapements. As for the lever or pallet fork, it will have to wait for another issue.

We begin this story where the last ended – on the note that balance wheels and hairsprings need to function together. The best way to understand this is to think of the relationship between the mechanical wristwatch and the pendulum clock. Just as the pendulum is the regulating organ of the clock, the balance and balance spring perform the same function in the wristwatch. That means the balance and balance spring have to approximate the effects of gravity. Our returning protagonist for this introduction is none other than Dutch physicist Christiaan Huygens. You will recall that Huygens pioneered the balance spring (perfecting it in 1675) and the pendulum (of the aforementioned clock). 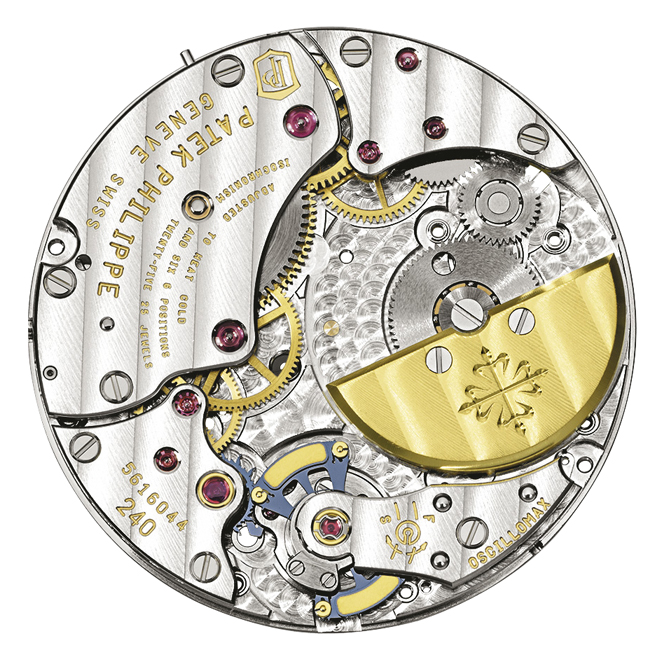 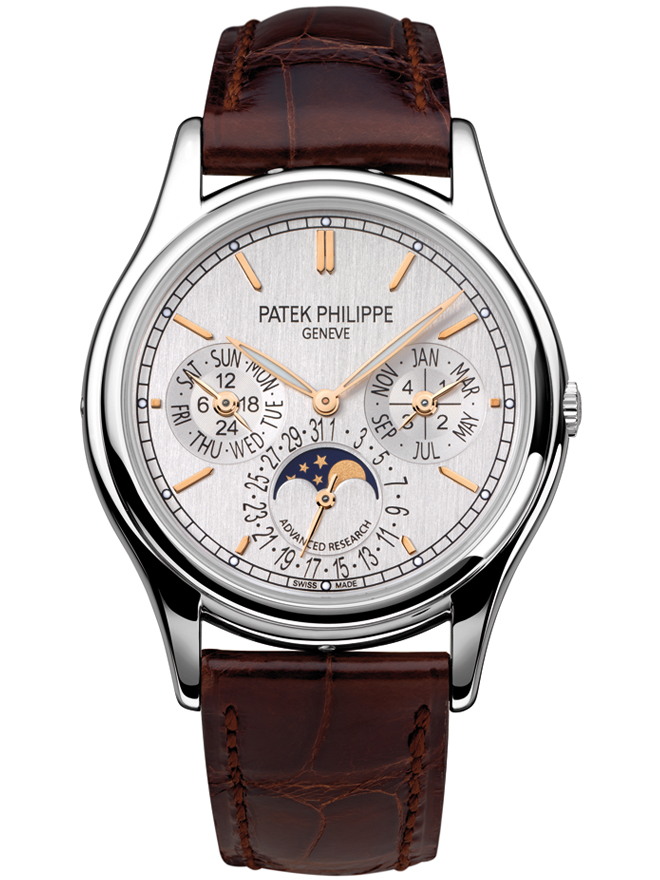 Curiously, the balance wheel appears to have existed before Huygens time – Huygens himself designed his balance wheel and spring system in the verge escapement style. Indeed, Huygens and other pioneers had been searching for the right component to create harmonic oscillation, and that missing piece was the balance spring. So the rest of the verge escapement – the Swiss lever system would only emerge later – existed prior to 1675.

Harmonic oscillation, as a physical property, was explored first by Galileo Galilei as he probed the function of pendulums in the very early part of the 17th century. It was Galileo who discovered isochronism as something intrinsic to the swinging of pendulums. Basically, the period of swing of any given pendulum is relatively consistent, no matter the size of the swing. With this, one could get a stable timekeeper because as long the pendulum keeps swinging, the clock keeps ticking at the same rate. Obviously, a clock that ticked at different rates depending on the swing of the pendulum would be less than useful. 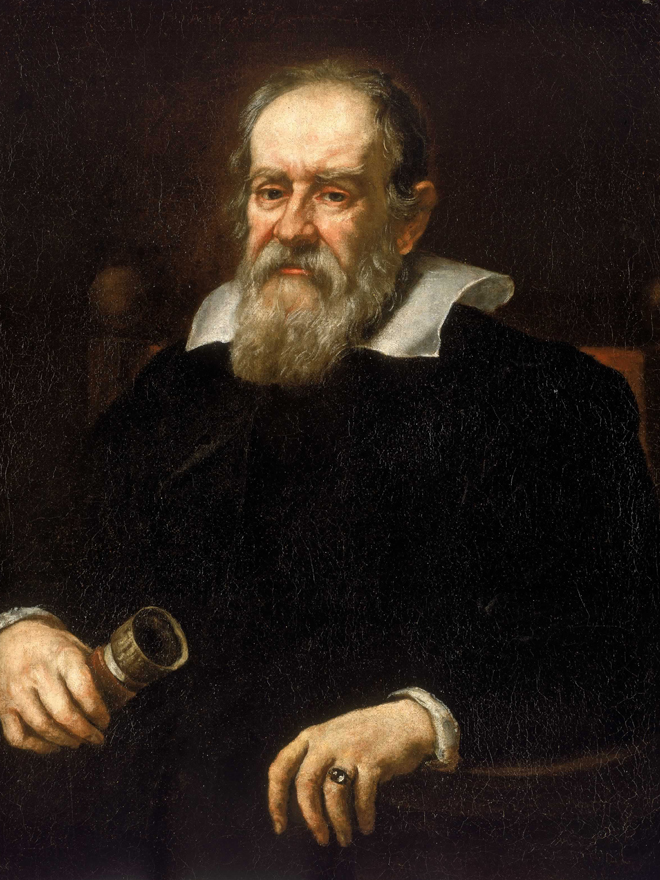 The pendulum gets this isochronous property from gravity, which means that clocks equipped with pendulums had to be as stable as possible; motion disrupts the swing of a pendulum, introducing undesirable variation. Huygens completed the pendulum clock project initially put into motion by Galileo. Before the advent of the pendulum clock, mechanical clocks used another component to simulate isochronism: the foliot. Relying on inertial forces, this was a horizontal bar (with weights on either end) pivoted exactly in the middle. The resulting rocking motion, driven by the kinetic energy of an uncoiling spring, supplied the timekeeping rate.

Cutting directly to the present-day mechanical balance assemblies, the balance wheel rotates roughly one and a half times in one direction, which constitutes one swing. This is about 270° to each side of the balance wheel’s centre equilibrium position. A complete cycle is two of these swings, which means two beats. The stiffness of the balance spring and the wheel’s moment of inertia are key elements in the equation that determines how many seconds it takes to complete one cycle.

Where does the balance wheel fit in to this story? Well, a full description is provided in the section on lever escapements (Leverage) as well the brief tl;dr above, but do take a moment to read the On the Verge segment because it sets the stage. The balance wheel appears to be the best form to work alongside the traditional spiral or balance spring.

In its current form, balance wheels have a variety of appearances, which can be broken down into two main forms: smooth and not-smooth. Yes, not-smooth is not especially eloquent but if one must have a more technical-sounding term, then it will be adjustable-mass. We choose to use not-smooth because this will include screwed balance wheels, itself not a particularly charming description. The not-smooth version of the balance wheel is traditional, with tiny screws on the rim of wheel. This is not to be confused with the Gyromax by Patek Philippe, the Microstella by Rolex, and a variety of options from Swatch Group (mainly from Omega) which appear to include screws on the rim or on the inside of the rim. 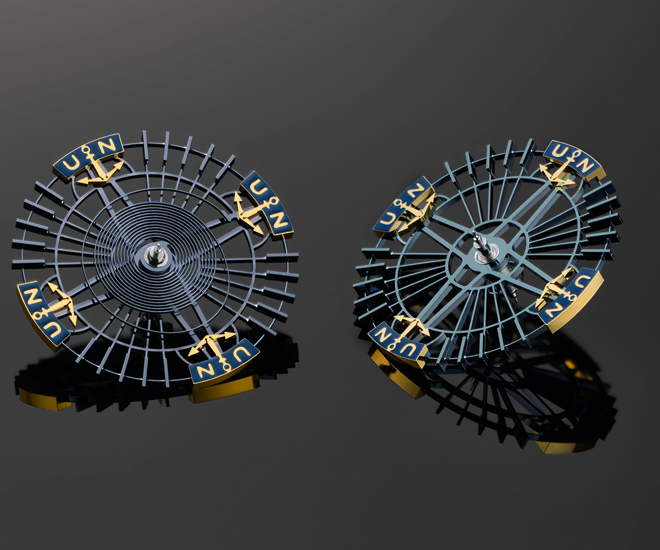 In principle, not-smooth systems use weights to adjust the inertia of the balance wheel – how far the screws are fastened into the balance determines this in the screwed balance versions. In the traditional system, the balance would be hand-adjusted by watchmakers in a process known as poising the balance, or balancing the balance; for the newer balance designs of the adjustable-mass variety, these are typical poised by computer once the spirals have been attached. 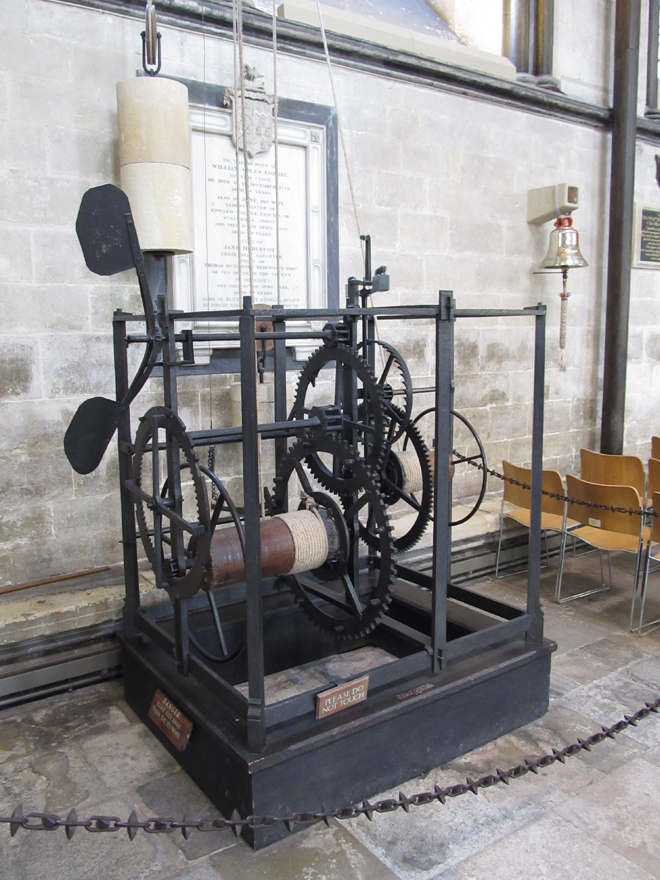 The Salisbury cathedral clock shows what the first verge clock looked like, courtesy of Wikipedia

The verge escapement consists of a crown-shaped wheel, with protruding sawtooth-shaped teeth; its axis is oriented horizontally. A vertical rod, the verge, is positioned in front of the crown wheel, with two metal plates (pallets) that engage the teeth at opposite sides of the crown wheel. The pallets are oriented with an angle in between them so only one catches the teeth at a time. Either a balance wheel or a pendulum is mounted at the end of the verge rod.

As gears deliver the energy of an unwinding coiled spring to the crown wheel, one of the crown wheel’s teeth pushes on a pallet, rotating the verge in one direction. At the same time, this action rotates the second pallet into the path of the teeth on the opposite side of the wheel, until the tooth pushes past the first pallet. Then a tooth on the wheel’s opposite side contacts the second pallet, rotating the verge back the other direction, and the cycle repeats.

So, what began as the unregulated rotating of the crown wheel is transformed into the oscillation of the verge. This puts the pendulum or balance/foliot into motion. Each swing of the balance/foliot or pendulum thus allows one tooth of the escape wheel to pass, thus making the motion of the clockwork regular. The wheel train of the clock advances by a fixed amount, moving the hands forward at a constant rate. 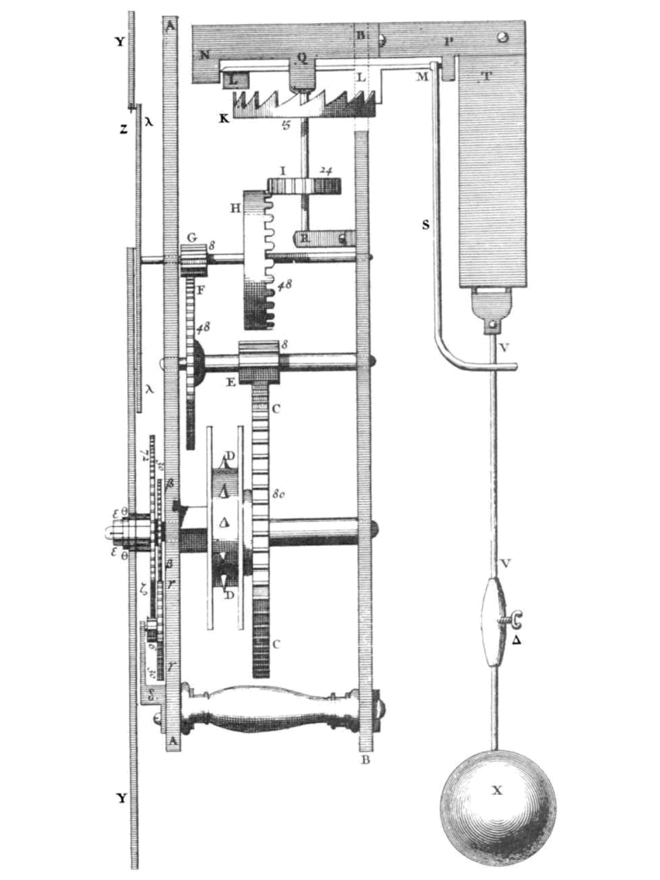 The crown wheel must have an odd number of teeth for the escapement to function. With an even number, two opposing teeth will contact the pallets at the same time, jamming the escapement.

With the advent of the pendulum, the anchor escapement provide a more natural action for clocks and so it began to replace the verge escapement.

Developed by Thomas Mudge, the lever escapement is, literally, the escapement of the contemporary mechanical wrtistwatch. Once again, we are indebted to Glasgow’s book for information, along with TimeZone’s watchmaking school. The brief description of how it all works below has been derived from those sources (mostly those sections by Walt Odets). Balance wheel and hairspring of the TAG Heuer Autavia Isograph 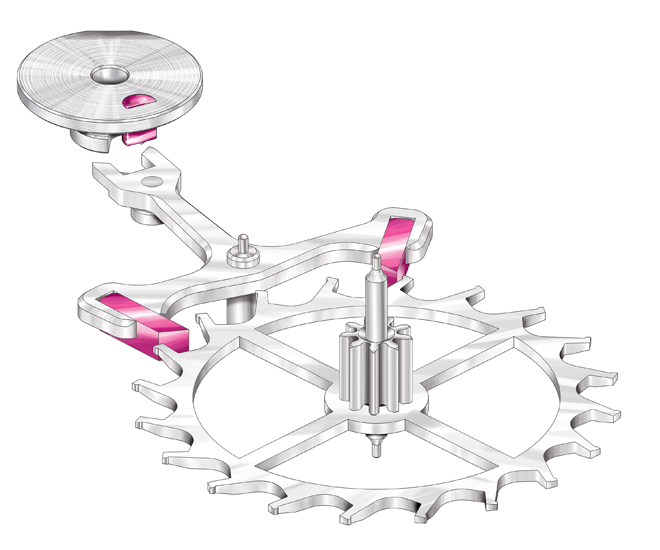 Each back and forth movement of the balance wheel from and back to its centre position corresponds the movement of the escape wheel by one tooth (called a beat). A typical watch lever escapement beats at 18,000 or more beats per hour, sometimes also called vibrations per hour. Each beat gives the balance wheel an impulse, so there are two impulses per cycle (same as the verge escapement). Despite being locked at rest most of the time, the escape wheel rotates typically at an average of 10 rpm or more.

The origin of the “tick tock” sound is caused by this escapement mechanism. As the balance wheel rocks back and forth, the ticking sound is heard.

While the Glucydur balance appears to dominate, with its alloy of beryllium, copper and iron, there are other sorts of balance wheels. Scanning auction catalogues, the most typical alternative is the gold-copper alloy balance wheel. Functionally, both types of balances perform the same trick, but some additional details are required to understand what is happening here.

The central issue is temperature variation because the balance spring’s mass properties will change as it expands or contracts. Obviously, this will affect the timekeeping rate because it will impact the oscillations of the balance wheel. In fact, the balance wheel is also subject to thermal variation. Both gold-copper and Glucydur alloys have excellent linear expansion coefficients, between +14 and +17 x 10-6/°K, and thus these materials continue to find favour today with watchmaking firms. Nothing is perfect however, and when these alloys expand, the escapement will no longer be isochronous. 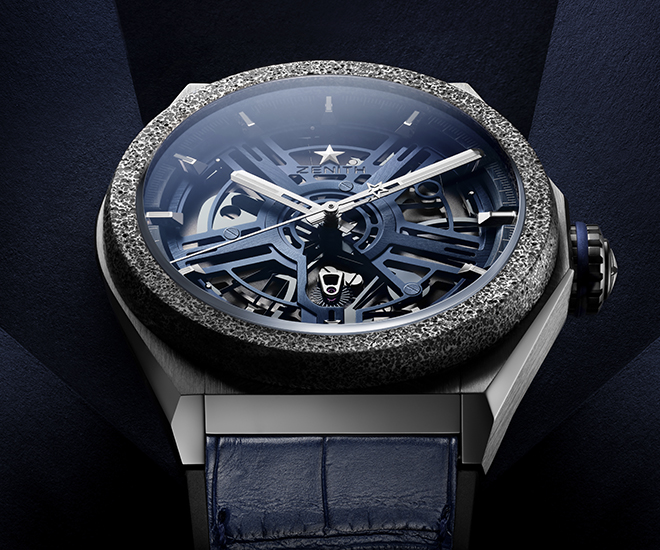 The most recent attempt to address this issue was the Zenith Defy Oscillator, which is also the most radical escapement innovation since the time of Huygens. It actually combines the pallet fork, the balance wheel and the hairspring into one silicon structure. A non-metallic material, silicon is treated differently to handle thermal variation, typically using an oxide of silicon, for example. In the case of this Zenith system, it is not so straight-forward as all elements of the escapement are in one piece.

We shall be looking more in-depth at this system, along with the Genequand oscillator (Parmigiani Fleurier), the Ulysse Nardin Anchor Escapement, and the Girard-Perreguax Constant Force Escapement in our issues in 2020.