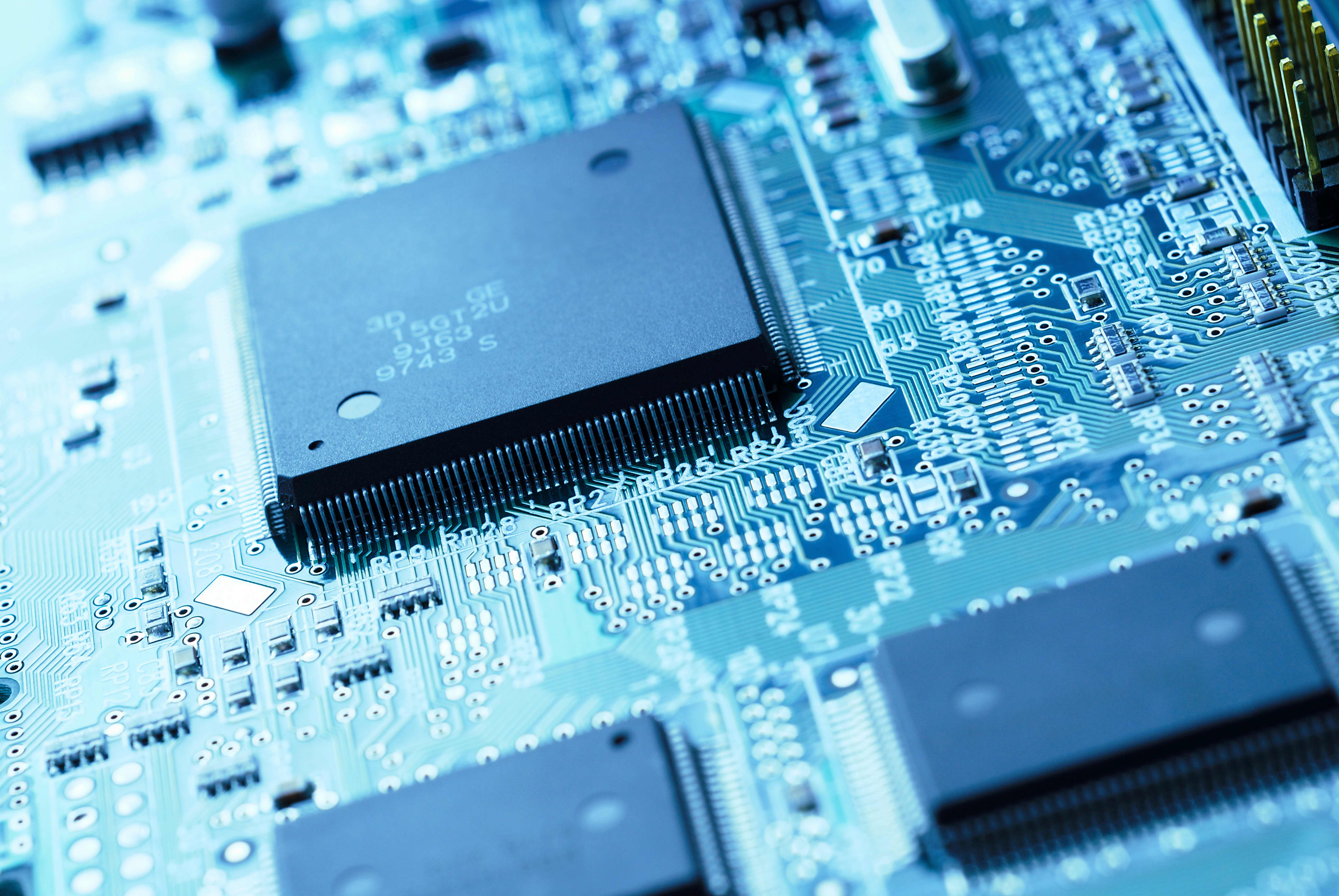 Integrated circuits on a circuit board. The semiconductor industry has been in focus during the U.S.-China trade war.

When top-rated analyst Stacy Rasgon initiated his coverage on semiconductors in June 2009, little did he know a sea change was on the horizon.

“I launched right at the bottom with a really negative view on the sector,” Bernstein’s Rasgon said. “Literally six weeks after I launched, everybody started beating numbers by double digits.”

Of course, everything snapped back from the depths of the financial crisis after the Federal Reserve came to the rescue with its unprecedented quantitative easing program, but the risky chip sector snapped back like no other. The Philadelphia Semiconductor index, the closely watched 30-stock benchmark for the sector, doubled its value in just a year from its trough in November 2008.

“All of a sudden, a lot of the companies didn’t have the capacity in place to support the order. The lead time, how long it takes between placing the order to getting the parts, stretched out to 25 weeks,” Rasgon said.

Flash forward 10 years to the turn of a new decade, cutting-edge chipmakers stand out as the best-performing industry across sectors and regions, becoming the backbone of the economy through the prevalence of internet-connected devices. Semiconductors now power the most essential products and technology to humankind, from advanced mobile networks to the iPhones of the world to the next-generation artificial intelligence.

The sector soared 377% in the past 10 years, more than doubling the S&P 500’s 182% climb.The biggest exchange-traded funds in the industry — the VanEck Vectors Semiconductor ETF which tracks the 25 largest U.S. chipmakers— also surged more than 400% this decade.

“The industry seems to have benefited from bullish investor sentiment given the prospects for emerging technologies” in computing, storage, and enhanced connectivity, said Michael Cohick, VanEck’s senior product manager.

Dusting themselves off the crisis rout, chipmakers learned to streamline their production and improve their capacity planning and equipment spending. Some transformed to customization businesses while others turned to outsourcing to reduce costs. At the same time, chip demand rose to a fever pitch as the economy found its way back.

“People took action in the throes of the downturn that left them in a better place structurally,” Rasgon said. “Companies got out of the worst business and they started rationalizing their manufacturing footprints.”

To keep pace with big customers like Apple and Amazon with increasing demand for cheaper chips, the semi industry turned to mergers and acquisitions to cut costs by combining sales forces and back-end operations.

In 2015, Avago Technologies merged with Broadcom for $37 billion in the largest chipmaker deal in history. Amid a steady decline in personal computer sales and smartphone demand in recent years, Broadcom, a big iPhone and PC chips supplier, managed to transform its core business to cloud data center networking and AI custom processors. The San Jose, California-based company saw its shares skyrocket 1,800% in the past 10 years, the best performer in the sector and one of the top-ten best performing stocks in the S&P 500 in the decade.

Wall Street remains bullish on Broadcom after the epic run. Among 33 analysts covering the stock, 21 have a buy rating and 12 gave a neutral rating. It is named J.P. Morgan’s large-cap semi top pick of 2020 as the bank predicts the chipmaker’s fast-growing custom processor business to bring in $1 billion to $2 billion a year from Google, Fujitsu and Intel.chi

Shares of Silicon Motion Technology, Nvidia and Entegris are also up more than tenfold this decade.

Semiconductor stocks enjoyed a seemingly unstoppable rally in 2019, up 57% and on pace for the best year since 2009. This great run occurred despite gloomy fundamentals and increasing macro uncertainty, leaving analysts scratching their heads.

“From a fundamental basis, this is one of the worst years. From a revenue standpoint, we are actually in the biggest semiconductor downturn since the financial crisis today. You’d never know it by looking at the companies, looking at the stocks,” Rasgon said. “The latest cycle is very, very unusual.”

The sector is looking extremely expensive, trading at the highest price to future earnings multiples in a decade. Meanwhile, earnings estimates for the semiconductor index have suffered at least four rounds of cuts. Chipmakers also found themselves at the center of the escalated trade battle between the U.S. and China.

“A lot of it has been trading around tariffs, tweets and headlines. Semis are sort of the ground zero for tariffs … Semis go inside all of the things that potentially could get impacted by tariffs. I’m surprised how well they’ve held up,” Rasgon said. Rasgon is rated consistently the top analyst on semiconductors by Institutional Investor magazine.

Chipmakers make up the majority of top U.S. companies with revenue exposure to China, according to Goldman Sachs. Evercore ISI said China accounted for 35% of global semiconductor sales. The U.S. in May also barred companies from selling to Chinese telecommunications giant Huawei, a big customer for American semiconductors.

After climbing a wall of worry in 2019, chipmakers are expected to see their fundamentals improve on the back of accelerated 5G deployment, more M&A activity and cloud infrastructure spending.

But Morgan Stanley, perhaps the biggest bear on Wall Street on the sector, sees limited upside ahead.

“Fundamentals were more challenging in 2019 than even our cautious view, yet stocks outperformed,” Joseph Moore, Morgan Stanley’s semiconductor analyst, said in a recent note. “A bottoming in fundamentals and Street estimates now closer to ours could help to limit the magnitude of pullbacks. That said, we don’t see much upside broadly.”

With a U.S.-China initial trade deal now close to fruition, investors are wondering if chipmakers’ booming future is now priced into the shares.

— CNBC’s Michael Bloom and Nate Rattner contributed to this report.