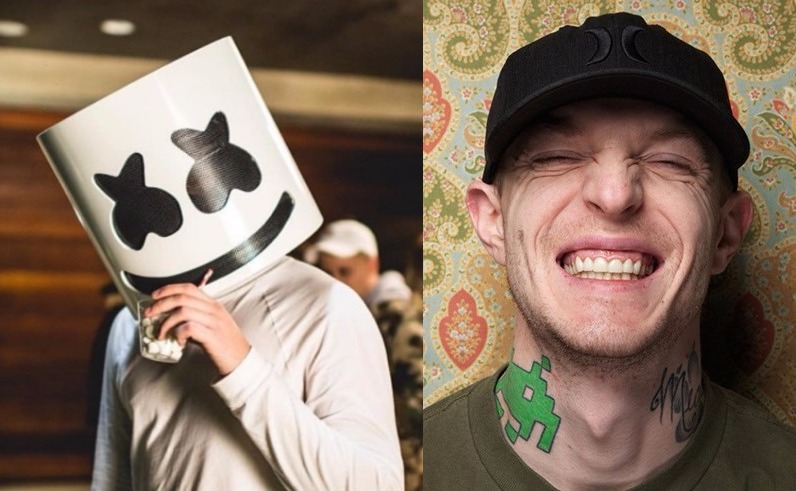 Before 2010, DJs were just faceless disc-jockeys on a dark stage to the world at large. Then, producers started booking international tours, dating celebrities, collaborating with major pop artists, and making a name for themselves at festivals with more production than some of the biggest rock bands of the generation. With more notoriety for themselves, it eventually came to pass that these DJs’ personalities would clash, and what better platform than Twitter, where everything is public.

It’s hard to say when this beef really started, but there have been many milestones along the way to help illuminate the path. The easiest place to start is the release of Zedd’s sophomore album, True Colors, which Diplo gave the poop emoji on Twitter. In a later interview with Radio.com, he tried to backtrack but only really made things worse when he called Zedd’s relationship with Selena Gomez a PR stunt for the album. His criticism even bore a response from Gomez herself, who said, “It’s very interesting that Diplo would think he knew about my personal life, but he doesn’t. I adore Anton [Zedd] a lot and I definitely had a thing with him, which was nice.”

Diplo continued the beef the next year by doing the same thing to Zedd’s collab with Aloe Blacc, “Candyman,” that he did for True Colors: give it the poop emoji. This time, Zedd came back with a vengeance and replied, “@diplo stop being a jealous little bitch and do us all a favor and just shut the fuck up. Thank you.”

It would be another two years before the two clashed again, this time Zedd was the one to instigate (via Max Vangeli). During Vangeli’s breakdown in 2018, he called Diplo “the biggest pussy dick in the game,” to which Zedd responded, “100% truth.”

After Billboard and everyone else covered the reignited beef, Diplo dropped a link to the coverage and added, “Come on @billboard I need some spicier beef I already put this guy in a coffin two years ago when he made a song with a Walgreens or a tampon company or whatever it was.”

In fact, Matthew Koma responded to Diplo and said, “I’ll feature.” At the time, we had no idea what to make of that comment, but little did we know it would foreshadow Zedd’s next big beef.

Almost exactly one year later, on the seventh anniversary of the song “Spectrum” from Zedd and Matthew Koma, the singer decided enough was enough and told his side of the story.

“I want to finally be transparent about this,” Koma began. “It’s a really sad truth because I’m extremely proud of the work he and I did together… unfortunately my good feelings toward those songs have all but disappeared as they were experienced alongside someone so toxic and self serving that it occupied the space where any happiness could exist.”

No one ever expected this beef, even with the hints he was dropping a year prior.

Zedd eventually told his side of the story four days later, and this beef has mostly fizzled on social media, but some fans still give Zedd grief over it in the comments on Instagram or Twitter.

The Chainsmokers vs everyone

This one is less actual beef and more a dog pile, but it’s worth mentioning nonetheless. Before The Chainsmokers were the chart-topping trio that are filling out stadiums around the world, they were just the frat DJs that liked to have fun. When they made “#SELFIE” in 2013, no one could have predicted the trajectory it would eventually put them on.

That even includes one horribly mistaken press opportunity when the duo came on American Idol to perform the song “live.” And though it didn’t have anything to do with them directly, that weekend on SNL, Andy Samberg unveiled the infamous DJ Davincii sketch and seriously went after DJs’ cred. It wasn’t a good week for EDM.

After The Chainsmokers’ performance on American Idol, pretty much everyone like Victor Niglio, Laidback Luke, and Deadmau5, even Porter Robinson piled on and gave their two cents. No doubt this was a day that will live in infamy for the dance music community.

This was definitely one of the more entertaining beefs to happen during a lot of our staff’s time as junior bloggers. Deadmau5 was at his most inflammatory on social media, and Marshmello was just beginning to really blow up after launching the project a year prior. The Marshmello project itself was a brilliant combination of marketing and unique sound that catapulted the DJ to the DJ Mag Top 10 in a matter of just four years, but it wasn’t met without its fair share of derision early on.

The beef started at Ultra in 2016 when Marshmello apparently tried to say hi to Joel, “I tried saying hi to
@deadmau5 at @ultra because I think he is one of the greats but he just flipped me off and walked away lol.” At the time, Deadmau5 didn’t respond — which was a bit uncharacteristic at the time — but sure enough, a couple weeks later…

In the middle of the Great Deadmau5 Tweets Of 2016, his acrostic rampage across EDM, deadmau5 also dropped some history. “fucking last ultra i went to i had that marshmellow dickhead following me around with a buncha cameras trying to get a rise outta me,” he tweeted. “for real… full costume and everything, walking around the dressing room yacht… i just flipped em off and hid somewhere else.

“then he immediatley proceeds to his twitter to tell everyone i flipped him off. Maybe act like a normal human fucking being. i dont know.”

Two months later, Marshmello tweeted at Deadmau5 asking whether or not he would play basketball with him. What seemed like an innocuous tweet without context really seemed more like a sort of kindergarten “I’m not touching you” tease with the previous events in mind. In response, Zimmerman criticized Marshmello’s “winning formula” of putting a bucket on his head and publicly mentioning Deadmau5 every week, and also “outed” him as Dotcom back when Mello’s true identity was still something of a minor mystery.

After calling him “annoying,” Deadmau5 went on to call out his “brain-dead posse of deaf sheep.”

The two would trade a couple more beefs before the year ended. Marshmello inserted a deadmau5 “cameo” in his music video for “Ritual” with Wrabel, and Deadmau5 showed off a Christmas present, a shirt of the Stay Puff guy from Ghostbusters, in between two graham crackers, with his head fallen off. Deadmau5′ caption “No comment” said enough.

After the Top 100 list came out in 2016, Hardwell went on an epic rant at the Revealed Records label party. He was speaking out in defense of his friend Atmozfears, and is especially humble in the rant, saying that Atmozfears is easily a better producer than him.

The year before, Kaskade called out the annual poll, as well. And in that case, a DJ Mag writer chose to retaliate by editing his bio on the poll in a way that was highly unprofessional. Nowadays, the DJ Mag Top 100 seems more like a formality than a list you want to find yourself on. Though, it’s always good practice to thank the fans who voted for you, because they really do care.

At the beginning of this year, Calvin Harris found himself against the entirety of the dubstep community after calling TenGraphs’ music “nazi headbanger music.” At the time, the comment was conflated to mean all of dubstep, but Harris clarified his meaning later that day, “Hi I didn’t say dubstep was shit I was addressing one abusive guy NOT an entire genre thanks.”

Not that it makes what he originally said any better.

That who beef was actually started by Apashe who called Calvin out for allegedly ripping elements of his “Majesty” music video for his own “Giant” video with Rag’n’bone Man. That issue was never really resolved, but Calvin still has a bad rep in the dubstep community to this day.

This is one of the earliest beefs in EDM, and also one of the more nonsensical ones. After Eminem’s performance at the MTV EMAs in 2013, Ron Burgundy, aka Will Ferrell, asked the rapper his opinion of Afrojack supposedly talking shit about him. Eminem responded by asking, “who?,” a diss to the famous Dutch producer. When asked a second time, Eminem continued to feign ignorance of Afrojack’s identity.

Afrojack’s social media pages were littered with people commenting “who!”, and he even got in on the joke himself event. For all our searching, we still can’t find what shit Afrojack was apparently talking.

Deadmau5 was one of the first people to give Skrillex a chance, after he was handed a USB drive from the fledgling producer at a HARD event containing Scary Monsters and Nice Sprites. Unfortunately, the relationship eventually soured as Skrillex found his own success with OWSLA and a more positive community, at odds with deadmau5’s generally caustic persona on social media.

Skrillex and Deadmau5 had a lot to say about each other back in 2015, more than can be effectively summarized in just a paragraph or two. Go here to read the full exchange.