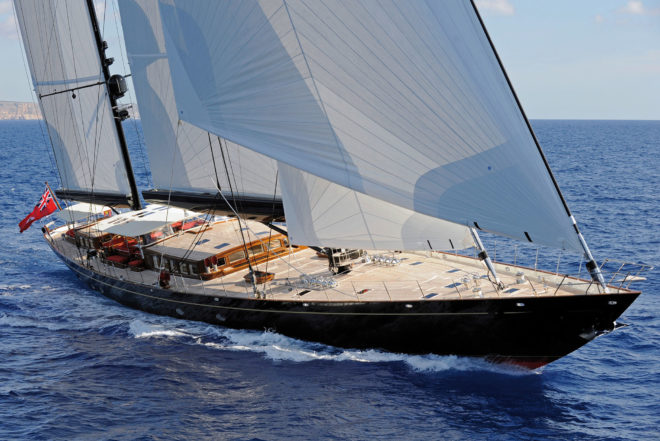 This is the composite catamaran support vessel for the all-aluminum Singapore-based 84m White Rabbit G, listed No. 13 in this Top 100. Echo Yachts of Western Australia built them both, showcasing custom talents that are also said to include steel builds. The yard is hoping other potential owners will look at the attractive costings that are involved in repeat or larger trimaran builds, a concept that achieves ultimate stability in a seaway or at anchor, thus virtually eliminating that scourge of occasional seagoing folk, seasickness.

Recently at Rivergate Marina in Brisbane, Double Haven was a trend-setting superyacht of the mid-1990s, taking five years in her gestation for Hong Kong-based publisher Merle Hinrich of Asian Sources and later Forbes fame. A book was written about her, and sketches akin to this vessel soon appeared in nearly every designer’s portfolio. Hinrich successfully used her as a floating office, and she was located mostly in the Philippines archipelago or Micronesia islands, such as Palau.

Another Damen support vessel, Pursuit initially turned up in tandem with a similarly-sized superyacht last year. She then began exploring  the islands of eastern Papua New Guinea, well-known for their vibrant corals and big fish, and lately has visited the Spice Islands and Ambon in Eastern Indonesia.

Back in Cairns after voyages to Singapore and Phuket Yacht Haven, Umbra like other Damens is included because, apart from their original concept as support vessels, they are increasingly being used in their own right as explorer yachts. This one was refitted in Whangarei, New Zealand, a few years ago, and has also been roaming the Pacific, including work for America’s prestigious Woods Hole Institute. Sometimes sails with 48m Delta Rochade.

A regular passage-maker in Asia-Pacific waters, Triton was back home at her US West Coast builder in Seattle late 2019, presumably for some TLC. Delivered in 2004, she has a GRP hull and superstructure, and was built to American Bureau of Shipping classification. She has master and VIP suites, and three double cabins augmented by four fold-down Pullmans. Powered by twin 1,000 HP Caterpillars, her large fuel capacity allows a considerable range of 6,100nm at 12 knots.

This lovely new arrival in French Polynesia in February looks perfect for a relaxed sojourn afloat, and even has a grand piano in the lounge. Built in 2010 to an André Hoek design, and refitted in 2015, the ketch-rigged craft combines classic lines and modern technology, and has already won the famous St Barth’s Bucket in the Caribbean. Eight guests can be carried in four suites, and other permutations are possible. Agents Fraser say that after French Polynesia she will sail on to Tonga and the Fiji islands by May, and is expected to arrive in Auckland, New Zealand, by August, well before the 36th America’s Cup gets under way.

In Papeete at our deadline, this immaculate Ron Holland design is now 25 years old, albeit she has had a complete refit in the interim. Thalia has an ultra-spacious main deck salon with panoramic windows, and retractable blinds provide on-deck shade. Mahogany panelling and marble showers are interior features.

Keeps itinerary as private as high-exposure superyachts can conversely hope to achieve. Last noted in Ambon, East Indonesia, after cruises in East Papua New Guinea waters and the Solomon Sea, and a South Pacific sojourn that ended in New Zealand and Australia. Built in the States in 2011, both exterior and interior styling are by renowned Donald Starkey. Semi-displacement GRP vessel with a 20-knot cruise speed. 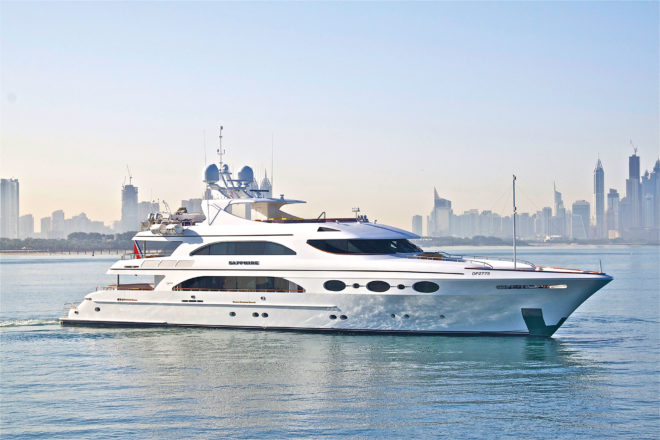 Originally Red Sapphire when  she arrived from the Gulf, this vessel was shown at the 4th Hainan Rendezvous where stablemate Lohengrin was then located, before the latter’s recent move back to Ft Lauderdale. Sapphire was subsequently purchased by “a consortium of Bangkok-based businessmen,” engages in charters, and has had refit work done at Echo Yachts south of Perth. Not to be confused with the 73m Nobiskrug superyacht of the same Sapphire name. 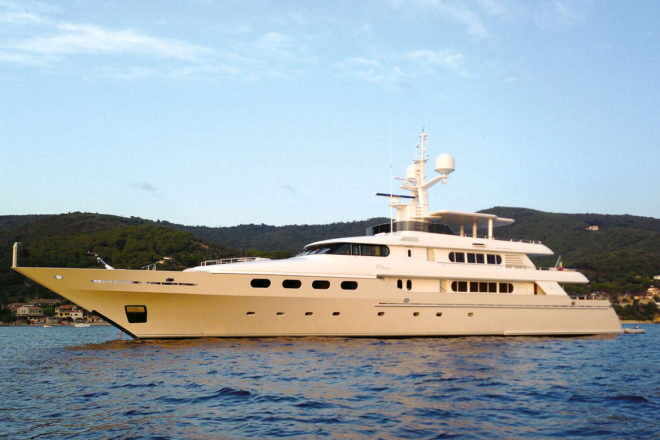 Listed in 2018 because we heard of Asia-Pacific connections, and the involvement of Phuket Yacht Haven denizen Capt Ed Shiels, who is now aboard Latitude. Eileen was in fact in Newport, Rhode Island at the time, but she has since lived up to predictions and appeared in the South Pacific on a westbound passage, taking in places like Fiji, Honiara in the Solomons, and Noumea, although she has recently made her way on again, to Spain’s Balearic Islands.

The late Dutch designer Peter Beeldsnijder created some of the loveliest super sailboat interior decors ever seen, particularly for Royal Huisman, but for this motor yacht which cruises the China Coast, with occasional sorties into Southeast Asia, he styled the exterior as well. 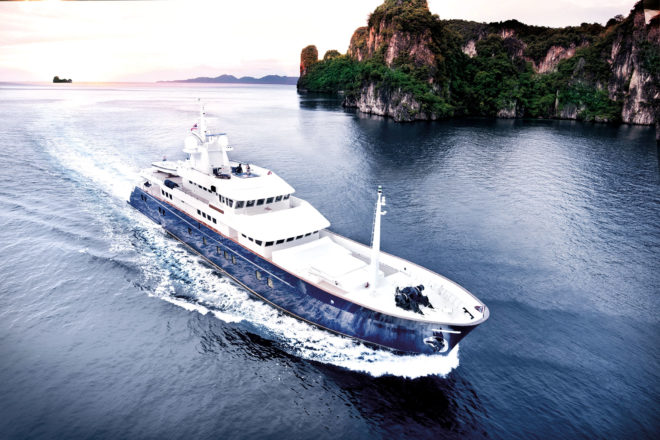 One of the most popular charter vessels in Southeast Asian waters in recent years, Northern Sun was originally built in Japan and refitted in Subic Bay. A knowledgeable captain and crew help introduce guests to unique getaways in otherwise well-known cruising spots such as the Andaman Sea. 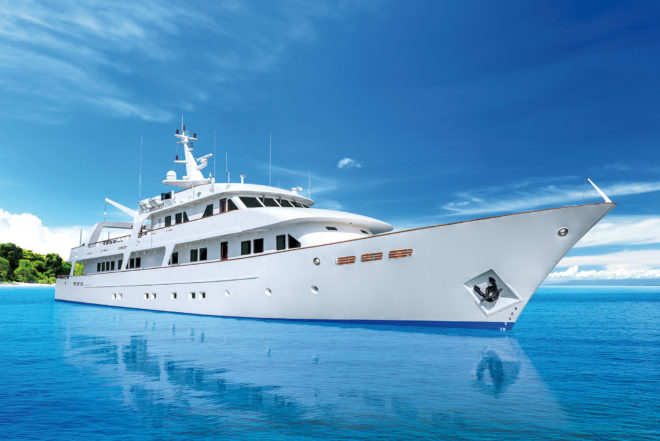 Built in 1982 and completely refitted in 2014, this vessel was used privately until a recent decision to offer her for charter. As Lies Sol of Northrop and Johnson remarks, she is probably the only large motor yacht available in waters of South Korea. Blue Sea has a master cabin on the principal deck, and can carry 12 guests altogether. Where to go? She is based at Incheon on the West Coast, so one could cruise there, and destinations south could include second city Pusan, where sailing events of the Olympics have been held, and holiday island Cheju.

Built as an ocean-going salvage tug by a Greek yard in 1970, Asteria was converted into a luxury expedition yacht in the early 2000s in New Zealand. She has been the steed of Chinese entrepreneur Tony Fung while he developed casino projects on Australia’s East Coast, including a voyage to Antarctica, but has been sold and lately is cruising in the South Pacific.

Many vessels are named Aurora, including a 74m Lürssen which visited Australia for the 2018-2019 festive season, but Aurora A is an Admiral, part of The Italian Sea Group, which was built in 1993 and refitted in 2005. She is more likely to be found berthed on the banks of the busy Huangpu River, which runs off the Yangtze Kiang and passes through the centre of modern-day Shanghai. It is possible to visit Shanghai by private yacht, but voyaging further up the Yangtze can be more complicated.

Voyaging north in the Malacca Straits when we last checked, possibly heading for Phuket, Michaela Rose has lately been cruising Australia’s Queensland Coast. This is the second classic yacht built by Frers Schweers in Top 100 after Senses, which is 10m longer. Michaela Rose was in Tahiti and Fiji before this latest Australian sojourn. Another Diana Yacht Design, her top speed is 16 knots and she has a maximum range of 3,800nm at 14 knots. 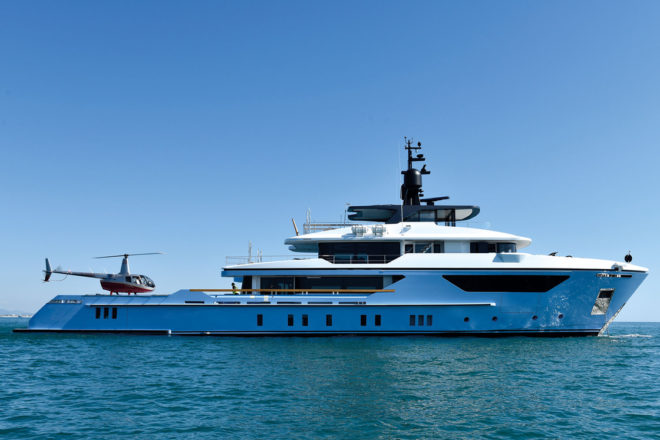 Latest flagship of Sanlorenzo’s Asia-Pacific fleet is this 500EXP delivered to a Hong Kong owner, although late 2019 the vessel was back in Europe, cruising England’s East Coast. She is an evolution of the 460EXP, with an extended aft deck, able to land a small helicopter. Sanlorenzo is represented by Simpson Marine, the region’s oldest and most successful agency.

Approaching Cooktown in Far North Queensland at our deadline, Rochade has been cruising between the South Pacific and Southeast Asia, via Australia and New Zealand, for some years. Her interior fit-out is described as “beautiful and contemporary Asian style”, with accommodation for 10 guests in five suites. A 3,500nm range allows for easy Pacific island-hopping.

Voyaging from Tahiti to Fiji, Noumea and Brisbane, No Comment under Capt Cy Wastell  is the former Lady Janet and Scott Free. Latest sojourn has been to the Solomon Islands, near Gaduda. She has a considerable MTU-powered 4,300nm range, and can accommodate 12 guests. Interiors are by Kater Graziano. 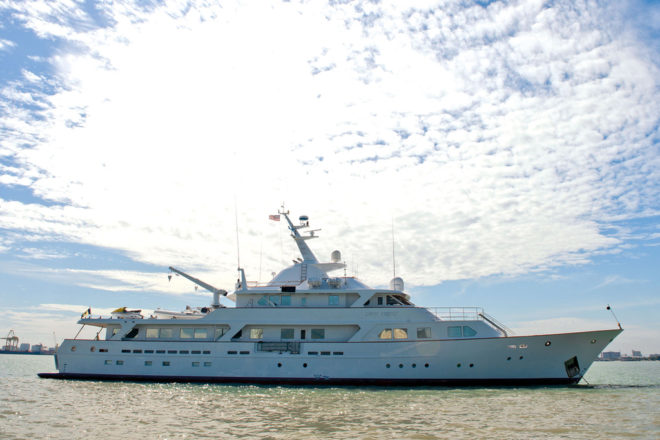 Operating out of Nishi Zosen in Japan, Sterling Scott was an in-demand superyacht stylist as Australia won the America’s Cup in 1983 and defended it in 1987 off Fremantle, the port of Perth. As it turned out, America’s Dennis Conner got his own back, and the auld mug moved on to San Diego, but by then this vessel had become the first Asean Lady, Brian Chang’s pioneering superyacht in Southeast Asian waters. See an entry for the current 88m Asean Lady. Lady Orient is now based in Langkawi on the Malaysia-Thailand border.