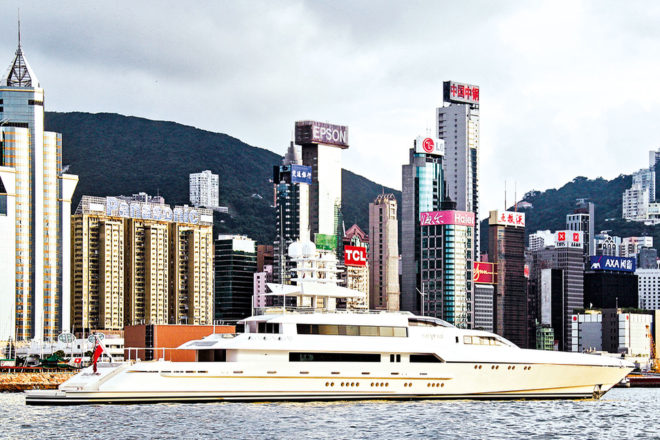 Voyaging along the US West Coast to Alaska, New Secret is part of a burgeoning East Pacific fleet of which we are recording a few representatives in the Top 100, in this case because it brings to 20 the total number of Amels superyachts in these waters, a very impressive turnout of the yard’s globe girding vessels.

Custom created for a well-known Australian home loans entrepreneur, Hasna has put many nautical miles under her keel since her delivery in Holland, first a Monaco Yacht Show launch party, then heading home, next a cruise in French Polynesia, and lately she is making calls around Boston, Cape Cod and Newport. Features include a substantial “beach club” and an 8m swimming pool. Exterior and interior styling are by Britain’s RWD.

Sister ship to Rabdan in Abu Dhabi and smaller niece to the 77ms Smeralda and Silver Fast, Dragonfly was bought by a well-known American IT guru who has a keen sense of environmental issues, and has spent most of her time in the Pacific, helping out after cyclones and generally exploring these waters. After a short absence in the States, she is back in the Fijian islands.

Recently ensconced at the Sydney Superyacht Marina, Felix set off again into the South Seas on a Cairns-Santo-Apia heading. This vessel was constructed in Germany in 1969. Her hull was completely replaced at Jade Yachts in Kaohsiung, followed by a full interior refit in Europe.

This is the fourth 69m Yacht Support Vessel built by Damen,  parent of superyacht yard Amels. After her launch, she returned to the yard’s Gorinchem facility for what BI describes as a full fitout for “marine conservation, ocean research, documenting ocean biodiversity and luxury dive expeditions”. She has new guest and crew areas, is certified for Arctic and Antarctic expeditions, and has a submarine. Adventure specialist Mike Rouse is involved. Last noted for this list in Cooktown in Far North Australia. 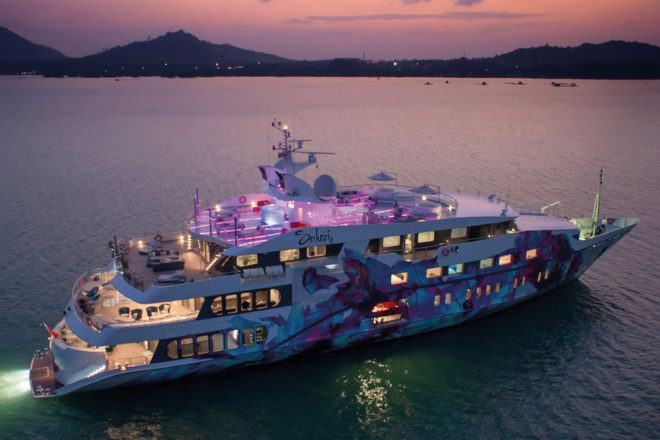 “Named after a mystical warhorse of the Tang Dynasty Emperor Taizong, an artwork by Li Jiwei adorns the yacht’s hull as a modern interpretation of the ancient tale”, says the Camper and Nicholsons website. A former boutique liner from French Polynesia, she offers accommodation for 36 guests, and is beautifully outfitted by Miami-based Luiz de Basto. Exotic charters are available in Asia-Pacific waters and elsewhere depending on the season.

Sold by Phuket-based Australian Joshua Lee, Samaya has a manta ray insignia, and her owner’s love of diving is reflected in a very advanced dive centre aboard. The vessel has been voyaging through the island groups of French Polynesia via capital Papeete in Tahiti. 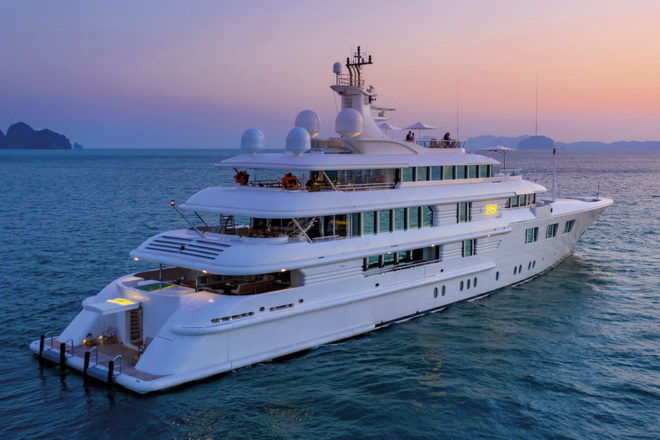 This exceptional custom Amels is offered for charter in Australia and New Zealand – America’s Cup waters – in the 2020-2021 season by Burgess. She can accommodate 12 guests in seven cabins. Spa facilities include a Turkish hammam, massage and beauty room. A fully-equipped gym and large jacuzzi are located on the sun deck, which can be reached by an elevator starting on the lower deck. Zero speed stabilisers reduce any motion while at anchor.

A wealthy Perth-based businessman has cruised this lovely blue-hulled vessel extensively in recent years, including a Pacific odyssey. Late 2019 she was reported for sale, while still chartering in the interim. Burgess.

Another yacht support vessel by Amels parent Damen, which is a leading light of the international ship building industry, the name Garçon perfectly summarises her purpose. She sails with the 87m Lürssen Ace, and both are returning to Asia-Pacific waters for 2020-2021, when much is happening. See also #25 Game Changer.

Exploring New Zealand’s extraordinary coastline, Maria was known previously as Aquarius. Built in 2007, her exterior and interior design are by accomplished British-based Terence Disdale. She can carry 20 guests and 18 crew, and powered by twin Caterpillars, has a 5,000+ nm cruising range at 12 knots.

Another of the Limited Editions designed by Tim Heywood, this vessel was delivered in 2011, and refitted by Amels in 2019. Previously known as Infinite Shades, she is now Ventum Maris, or Sea Winds in English. Interiors by Andrew Winch. Features include skylounge dining, a swim-up bar and jacuzzi, and a full-beam master suite. 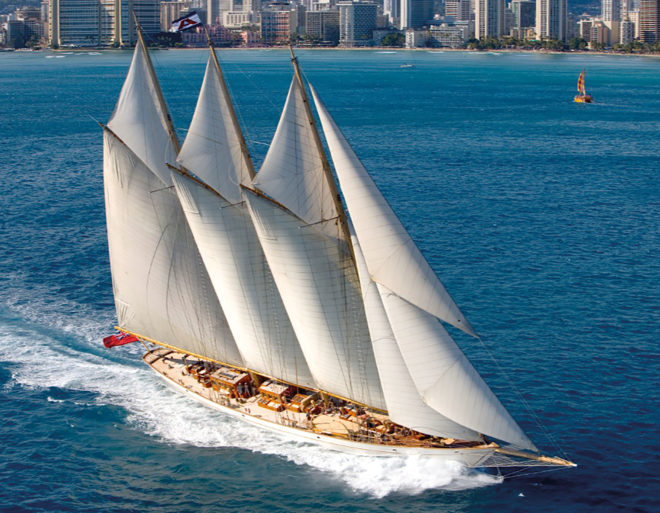 This fabulous three-masted schooner,  built in Spain’s Balearic Isles in 1984, has completed a four-month refit and Lloyd’s survey at The Yard Brisbane, and will remain in Asia-Pacific waters under long-term Captain Paul Goss until the 36th  America’s Cup in Auckland in early 2021. She has an earlier link with Brisbane. Alan Bond, the controversial entrepreneur who relieved New York Yacht Club of the America’s Cup for the first time in 1983, bought the vessel and used her to promote his Brisbane and state Queensland brand beer. Usually Adix is handled by Pendennis in Falmouth, England, but was happy with TYB’s work, a feather in the cap for International Development Manager Mark Phelps, himself a former captain. 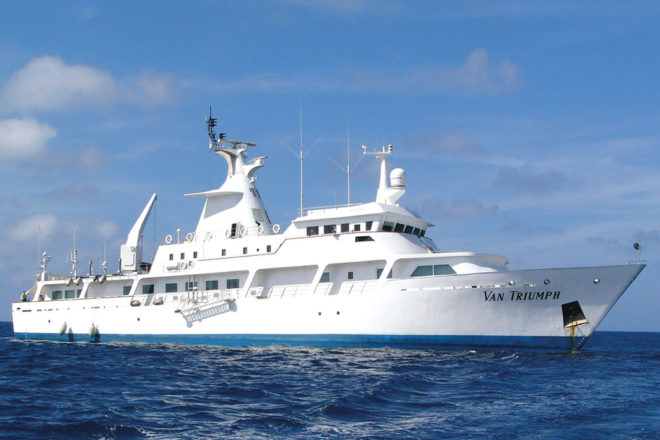 David Lieu’s Hong Kong-based vessel, and Brian Chang’s first Japanese-built 48m Asean Lady in Singapore, now called Lady Orient, were the true pioneers of super yachting in Asia. Van Triumph was quite a sight, steaming up Hong Kong Harbour on the stroke of 12:00 each Saturday as Jardine’s noon day gun was fired, to pick up guests from Royal Hong Kong Yacht Club. David’s voyages deep into the South China Sea in this and a prior 33m motor yacht are the stuff of legends. He hunted wild pigs in Hong Kong’s New Territories, and boated 100kg yellowfin tuna at Scarborough Reef. 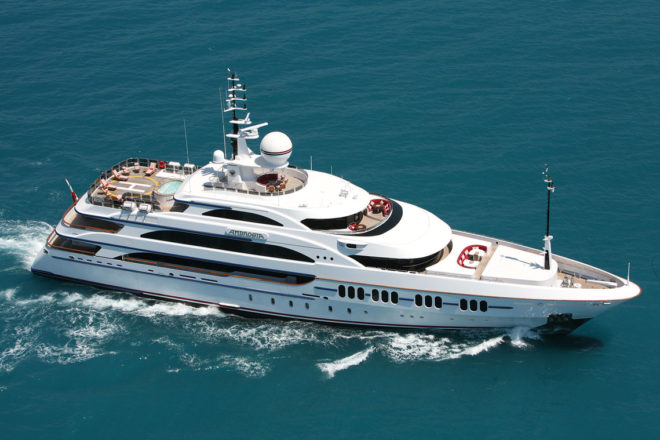 Only marginally later on the superyacht scene, Kaohsiung and Hong Kong-based Ambrous Young was a substantial investor in Italy’s leading superyacht yard, and built three Benettis at Viareggio before their latest Livorno sheds, which have disgorged three 100m+ vessels, came on stream. Still active, Ambrous promotes Kaohsiung big boat facilities at the entrance to Love River, and sailed Ambrosia to a recent Singapore Yacht Show.

Anchoring off Brisbane’s Botanic Gardens has become a new fad, first for the 74m Lürssen Aurora, and more recently for Callisto, steed of a Barbados-based trader. Both had been clients of well-regarded Rivergate Marina and Shipyard, which arranged for the vessels to sojourn amid the city’s highrises after repairs and maintenance a few nautical miles downstream. Then they continued Asia-Pacific cruises, with Callisto eventually to return to the Caribbean.

Last refitted in 2016, this unusual luxury expedition yacht charters between the South Pacific and Southeast Asia with occasional dips down to Antarctic waters made possible by her vast fuel reserves. Adventure is her theme, and she is well-equipped for exotic passages in remote locations.

An Amels 199 Limited Edition, like Hong Kong-based Event, this Tim Heywood and Andrew Winch collaboration was delivered in 2018, and is reported bound for Asia-Pacific waters from the Aegean. She can carry 12 guests and 13 crew, and is powered by twin Caterpillars, allowing a cruising speed of 15 knots.

Little information is so far available on this vessel, but she is one of several new builds destined to boost the already formidable Amels Asia-Pacific fleet. Delivery in early 2020. Marketing executive Victor Caminada remarks that their Limited Edition concept, now involving designers Tim Heywood and Espen Øino, is proving very popular in Asia.

Underscoring custom options available in the Limited Editions range, Calypso’s exterior and interior styling is by Michael Leach. After a lengthy stay in the South Pacific, she made a side voyage to Ft Lauderdale at year’s end.