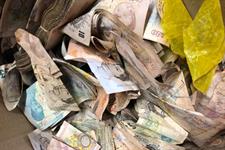 Staff at the scrap metal and waste recycling dealer Sackers in Ipswich found the safe stuffed full of notes and coins when it was opened.

They handed the money to police in April and because it has not been claimed the company has decided to split the funds between St Elizabeth Hospice in Ipswich and East Anglia’s Children’s Hospices.

Helen Crapnell, digital and marketing manager at Sackers, told Third Sector the company did not know where the safe had come from.

“Safes are hard to open so we store them up and open them at the same time,” she said.

She said the company had previously found silverware traced to a local church in another safe.

Crapnell said St Elizabeth was Sackers’ charity of the year and the Dodds family, which runs the company, had close links with East Anglia’s Children’s Hospices.

The Most Popular Horror Novels of the Past 5 Years, According to Goodreads
Waterfront Invigoration — Hong Kong Property Outlook 2022
My Brother Is Away
JD Farell Delivers Intoxicating Remix For Electric Polar Bears, CAZZETTE & The Ready Set’s “Cloudy Heart”
Courtney Love Joins The Lemonheads to Perform “Into Your Arms” in London: Watch