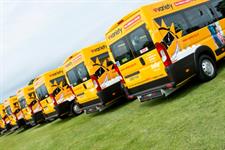 Variety, the Children’s Charity, has promoted Jo Carter to be its next chief executive.

The charity said Carter, who joined as director of fundraising, marketing and communications in May, had been interim chief executive since July.

She succeeds Frances Lang, who only joined the charity in September last year.

A spokeswoman for the charity said Lang “had a great spell as chief executive but decided to leave to pursue other opportunities”. The spokeswoman was unable to say where Lang had gone on to.

Carter joined Variety from the music therapy charity Nordoff Robbins, where she was director of external affairs.

She has also held senior roles at charities including the NSPCC and the housing charity Shelter, a statement from Variety said.

Variety, which supports disabled and disadvantaged children, provides accessible transport in the form of its Sunshine Coaches, offers customised wheelchair and specialist equipment grants and day trips for beneficiaries.

Harold Tillman, chair of Variety, said: “Jo’s experience in the charity sector is invaluable especially as we look to develop our plans to move forward as an organisation, with a focus on continuing to increase the number of children we are able to support.”

Carter said the work of the charity was invaluable.

“Throughout the charity’s 70 years it has helped almost one million children and their families, and we hope to be able to reach even more children in decades to come,” she said.

Marilyn Manson accused of raping underage girl in horrific new lawsuit
‘Boy Meets World’s Maitland Ward Backing Ben Savage’s Run for Congress
Bill Gates says no country ‘gets an A’ for its Covid pandemic response—including the U.S.
James Middleton Thanks Sisters Kate and Pippa Middleton for Going to Therapy with Him
Almost half of Americans think we’re already in a recession. Here’s how to prepare if they’re right