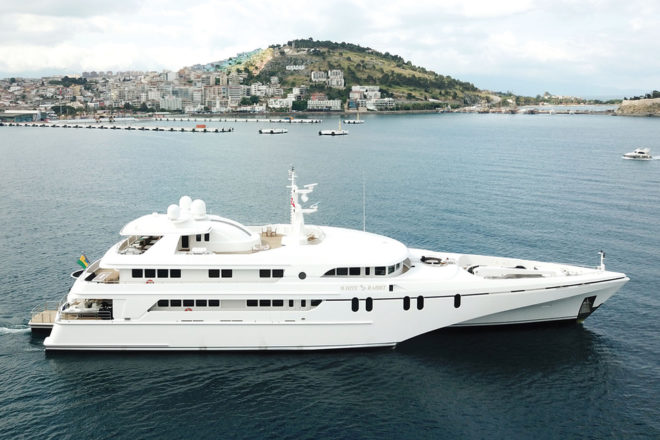 Arrival of 84m White Rabbit G in Singapore freed up White Rabbit E, now 41 in the Top 100, to position in the Med and then the Caribbean. The owners  also have 36m White Rabbit C, an Image Marine catamaran used for shorter-haul fishing and diving trips, plus 52m support vessel Charley and there are plans to possibly increase the fleet further. Captain Francois Voisin has been with the family since their first two Feadships, and now commands WRG, while Captain Paul Cresswell was in charge of WRE’s Atlantic crossing to Martinique in late 2019. 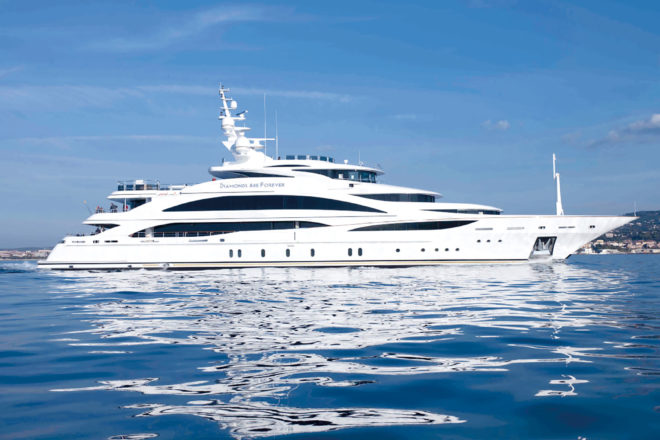 Usually located at Gold Coast Marina in Hong Kong, this superyacht named after one of the James Bond movies takes advantage of the proximity of the world’s two largest archipelagos, making a passage in the 7,000-isle Philippines recently, and is lately in Singapore, on Indonesia’s doorstep.

Also at Gold Coast Marina, this Amels Limited Edition 199 by Tim Heywood and Laura Sessa was originally built for a Russian owner and won prestigious superyacht awards at her launch. In a deal handled by Burgess, she was then bought by a prominent Chinese property developer who, like some other Amels aficionados in Asia-Pacific, is particularly keen on soccer.

Paraffin is a classic De Voogt Feadship presently based in Singapore and features include a jacuzzi and gym with a 360° view, an exceptional wine cellar, armada of toys and a home cinema. Six staterooms offset an opulent interior. Burgess offers for sale. “This yacht is exceptionally popular with guests, who sing the praises of both boat and crew,” says the Burgess website of Ramble on Rose, arriving late 2019 and chartering through 2020-2021. “One broker says they have never given such a glowing review to any yacht they have chartered before.” The problem is that she is already heavily booked. Hwee Tiah at Burgess says there’s limited availability Jan-mid March 2020 as she transits to Australia, open April-mid Dec in the South Seas, then back in Thailand from Dec 2020.

Built a decade ago for a well-known Australian who has had several yachts of this name, Slipstream was much-awarded on debut and still receives them, most recently for her crew’s efforts helping out with supplies in the wake of Caribbean hurricanes. A stylish vessel with many custom features, highlights include native Australian and Canadian artwork. 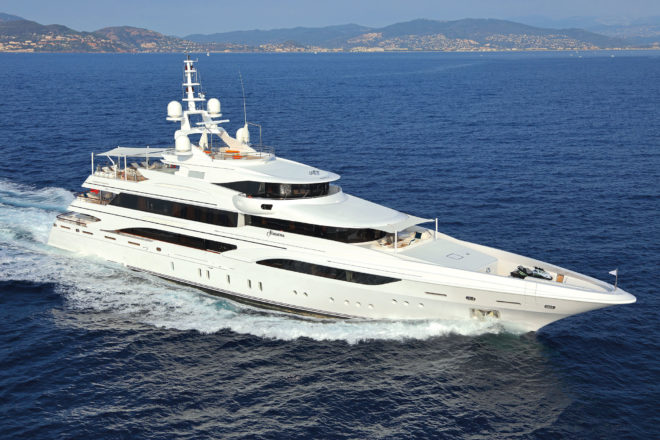 Recently cruising in Japanese waters, and previously in the Maldives and then French Polynesia, Formosa continues to Southeast Asia before returning to the Med. Fraser is central agent for this beautifully presented vessel. She has three sumptuous suites on the upper and principal decks, and superb amenities throughout. The name Formosa means “beautiful forms” in Portuguese, and was bestowed on the island of Taiwan by early navigators and traders.

Anchored at Fakarava Atoll near Rotoava as this was written, Dream has also spent lengthy periods based in Fiji, reports the long-time agent there David Jamieson. In this archipelago one can choose exclusive, totally private isles, or sample the fare at any number of five-star plus establishments ashore. The yacht was refitted by Bannenberg and Rowell in 2013, and more individual touches were made five years later. 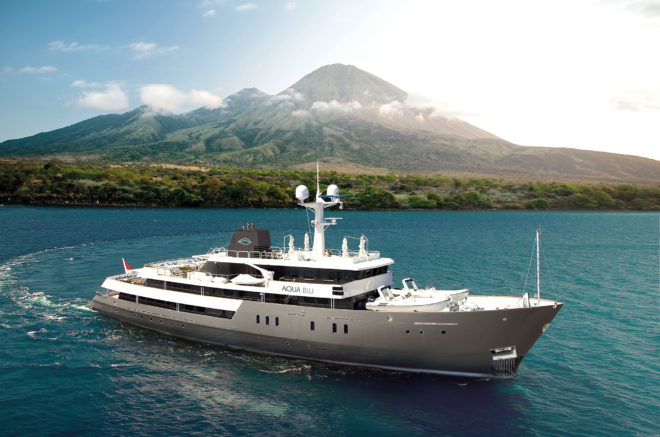 Built in 1968 by Brooke Marine, this is the former British Navy explorer HMS Beagle. Used later as a private yacht by European aristocrats, she was refurbished in 2019 by the accomplished Dutch designer Cor D. Rover and now, boasting 15 suites across five decks, she explores eastern waters of the Indonesian archipelago, including Bali-Komodo, Ambon and the Spice Islands, and Raja Ampat. Camper and Nicholsons is handling charters. Plying between Fiji and New Zealand in season, Senses like SuRi has a more expedition-style than pretty profile, but interiors are by Philippe Starck, and she has had an illustrious guest list in the past, providing good vibes for potential charterers. Now no. 50 in the Top 100, she was recently in exotic Goa on the Indian Coast, so it seems owner, captain, crew and agents conspire to suggest some interesting options. 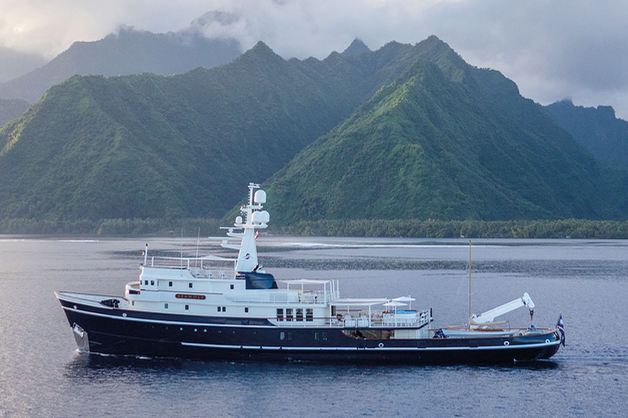 Those invited aboard Seawolf at Singapore Yacht Show recently, when this lovely, classically-outfitted vessel was chartered for anything from Feadship parties to media conferences, must have felt her affinity for the sea. Built in 1957 as the ocean-going Dutch tug Smit Clyde, her redesign for five-star leisure is a masterpiece, simple, elegant, and welcoming. Winston Joyce-Clarke, last aboard the New Zealand-built explorer Big Fish, was Captain, and everything else looked perfect for a long cruise. She was in fact headed for Japan’s inland sea, then a North Pacific passage to Alaska and Seattle. As Jacques Cousteau puts it in their brochure, “the sea, once it casts its spell, holds one in its net of wonder forever”. No better place to contemplate its many facets than aboard a craft such as this.

Regularly sailing French Polynesia and other South Seas isles, Ethereal is known as the first truly hybrid yacht, incorporating a bank of specialist batteries into her power systems that also rely on the wind in her sails. Owner Bill Joy is a software pioneer who like Dr Jim Clarke was attracted to Royal Huisman’s picture-postcard yard outside Amsterdam by their earlier build Juliet. 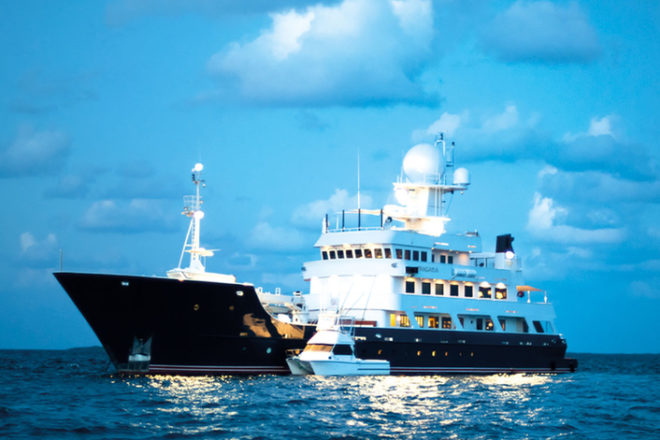 Built like SuRi at Halter Marine, once Trinity Yachts’ parent in the States, the vessel is named after our super continent before it began breaking up in the Triassic Age. She has undertaken assorted marine and birdlife ecological expeditions in the Indian Ocean, calling at Phuket or Langkawi for refuelling and R&R in between, and has spent over a year exploring the Australian coast. Lingering in Western Australia, she has been further refitted and sponsored by mining magnate Andrew Forrest to assess depletion of fish stocks.

Australian property developer Lang Walker has had a series of sailboats called Kokomo. Walker also recently launched Kokomo resort on an exclusive island in Fijian waters. His Alloy Yachts-built super sailboat has meanwhile been chartering in the Med, so visiting her namesake in Fiji may still be some time away. 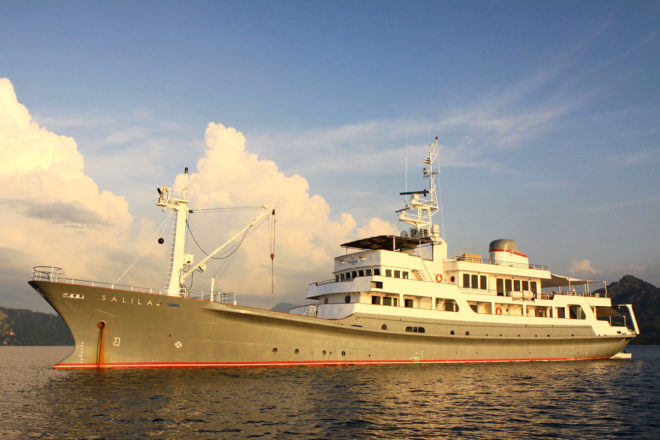 Regularly listed in our annual Charter Focus, this unusual vessel was refitted in 2009 and 2012 in Jakarta, and she continues to offer custom cruises in Indonesia, the world’s largest archipelago with 14,000 isles that stretch the equivalent distance of San Francisco to New York. Burgess.

Volpini was in earlier Top 100s, and last year the same owner took delivery of the Amels 188 Limited Edition Volpini 2, whose build was overseen again by Ben Young of Superyacht Management. Owner is a well-known Melbourne-based transport supremo.

Built in 1986 and styled by the late great Jon Bannenberg to a Diana Yacht Design, this former Lady Ghislaine and Lady Mona K was completely refitted by Balk Shipyard in the Netherlands

in 2017-2018 before embarking on her present world voyage, which saw her mid-October at Hamilton Island in Australia’s Whitsundays Group. She has a range of 4,300 nm at 12 knots. 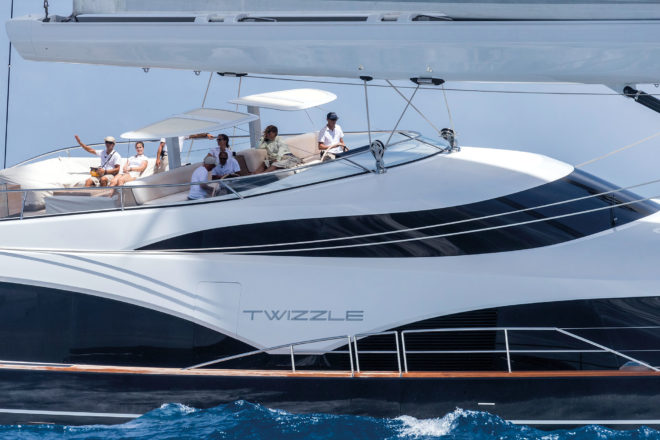 Lovely Royal Huisman ketch Twizzle was a centrepiece of Singapore Yacht Show a few years ago, and as successive owners have been keen on exploring further-flung parts of the Pacific, Asia and the Indian Ocean, it is no surprise that she is still cruising these waters, most recently in East Indonesia around Komodo Island, Biak and Sorong. Agent C&N.

No. 60 in the Top 100, the three-masted schooner Loretta has been Queensland-based for some years and was on the Gold Coast late 2019. The neo-classic yacht is available for charter for selected periods. She sleeps up to 12 guests in a master suite, VIP stateroom, and two double and twin cabins, plus ten crew. Elegantly outfitted with beautiful furnishings, the vessel has all the usual amenities.