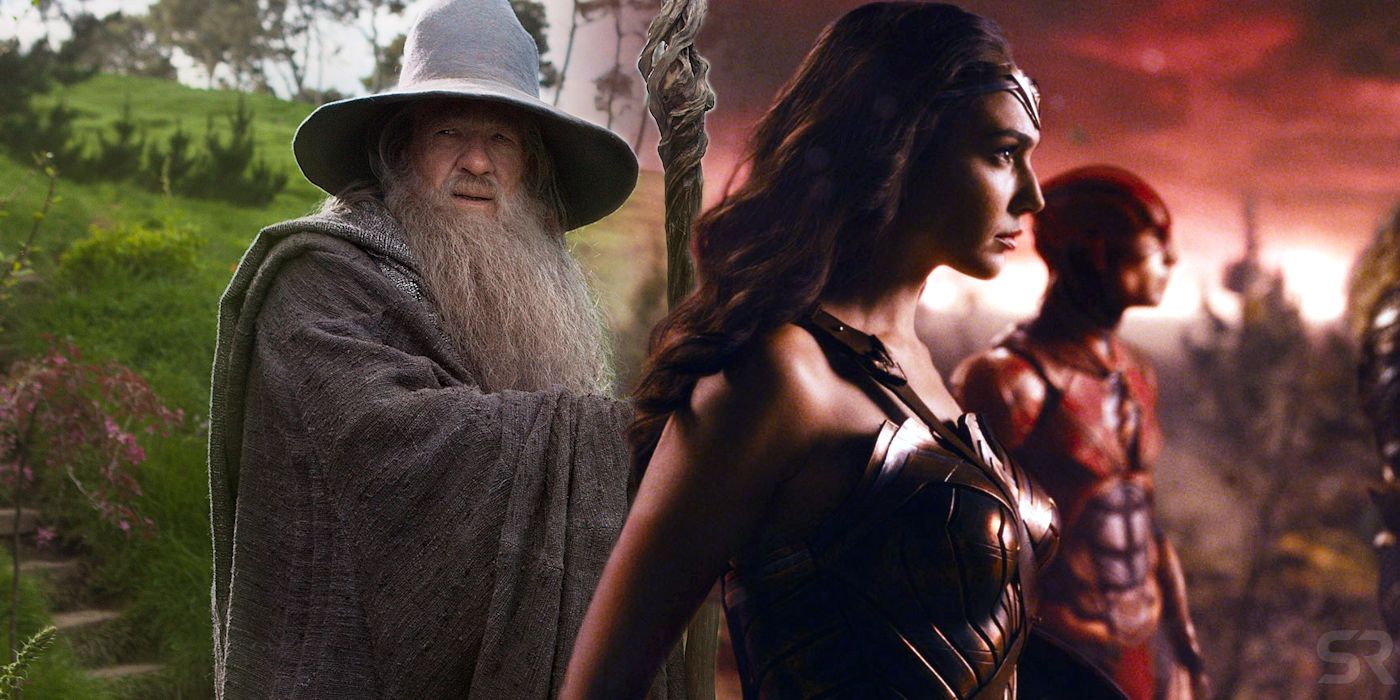 The Justice League Snyder Cut is full of parallels to The Lord of the Rings. The original, 214-minute DC story was going to take inspiration from the iconic story by J.R.R. Tolkien in more ways the one, but that didn’t end up happening due to the film’s extensive reshoots.

Despite some misconceptions, Zack Snyder’s original framework for the DC Extended Universe was not to create an equal to the Marvel Cinematic Universe. The MCU did a wonderful job creating a universe full of independent parts coming together for large-scale crossover events. Snyder was well-aware for DC to become its own juggernaut, it would have to do things differently than its Marvel counterpart. Instead of a cinematic universe like the MCU, Zack Snyder wanted to go for a more mythological monomyth, akin to Star Wars and, more accurately, The Lord of the Rings.

The parallels between Justice League Snyder Cut and The Lord of the Rings can start as early as the run time. With Snyder once again confirming the existence and length of the Snyder Cut, the run times of both series of films are similar. The extended cuts of The Lord of the Rings are 208 minutes, 223 minutes, and 251 minutes, respectively. The Snyder Cut fits right in that time frame. Still, the parallels go beyond simply run times. There are story beats, character arcs, and full sequences that seem to pay homage to arguably the greatest film trilogy of all time.

Items of Power and an Ancient Battle

On a story level, the Justice League Snyder Cut and The Lord of the Rings share more similarities that one would initially think. The concepts of items of power – the Mother Boxes representing DC and the Rings of Power representing The Lord of the Rings - each hold significant weight to the story as items that can destroy the world if held in the wrong hands. In both stories, these items of power are divided amongst different tribes and species of Earth to watch over to prevent any one side from getting too powerful.

The rings were divided between the Elves, Dwarves, and Men, while the Mother Boxes were divided between Amazonians, Atlanteans, and humans. But beyond that, The Lord of the Rings featured an ancient battle, where all sides of humanity came together to defeat Sauron. It was considered one of the most important victories of Middle-earth and immediately became a legend to all who came thereafter. The battle between Middle-earth and Sauron shares a striking resemblance to the ancient battle in Justice League. Amazonians, Atlanteans, and humans all came together to push back Darkseid himself and save the Earth, albeit temporarily. Darkseid, like Sauron, was pushed away from his goals for many years but the battle was not won, and a new group of people would have to finish what the ancient civilizations started.

A Heroes Journey and a Fellowship

One of the most immediate thematic parallels that spark between the Justice League Snyder Cut and The Lord of the Rings is the heroes’ journey and the concept of a fellowship. Snyder’s love for Joseph Campbell’s work is palpable on his own. Campbell’s influence is widespread over Man of Steel and Batman v Superman: Dawn of Justice. Superman’s own symbol carries quotes from Campbell written in Kryptonian. The Man of Steel is on Campbell’s ”The Hero’s Journey” throughout the saga that Snyder planned. Naturally, when Snyder’s saga gets to Part 3, which is the Justice League Snyder Cut, Tolkien’s work perfectly fits in.

The Fellowship of the Ring comprised of nine companions, all from different regions of the world, each with their own strengths, coming together for a common goal. The Fellowship of Snyder’s arc is the Justice League. Once again, like the ancient battle parallel, each member of the Justice League represents the people who fought to save the Earth before. Wonder Woman represents the Amazons, Aquaman represents the Atlanteans, Batman and Flash represent humanity, Superman is the angelic figure like Gandalf, and Cyborg is the heart of the story like Frodo.

Snyder has said many times that his Justice League featured Cyborg at the very heart of the story. In many ways, Cyborg is the main character of Justice League, showcasing his origin story, internal conflict, tragedies, and finally his resolve. Cyborg, unlike the rest of the Justice League, never asked to be put in this situation. He had no dreams of being a hero; he did not have the guilt of Batman, the destiny of Superman, the weight of their civilization like Wonder Woman or Aquaman. Instead, he was dragged into the battle due to the Mother Box. Cyborg’s story is almost identical to Frodo’s. If we were to compare each Fellowship member to their DC counterpart, Aragorn is Batman, Gandalf is Superman, Legolas is Wonder Woman, Gimli is Aquaman, Sam is Flash, and Frodo is Cyborg.

The temptation that Cyborg faces due to the Mother Box is close to the burden of the ring that Frodo carries. Neither of them asked to have that burden but they must carry it as they are the primary targets of their respective enemies. Sauron and Darkseid both send their second in command to do their bidding. Like Saruman in The Lord of the Rings, Steppenwolf is the villain the Justice League must defeat to clear the path to Darkseid. Cyborg is the heart of this story. From what we have seen of the Justice League Snyder Cut from Snyder’s teases, it’s clear that Cyborg would be tempted by the Mother Box to submit to Darkseid. Whether it’s nightmare sequences of the box promising Cyborg his parents back or Steppenwolf hellbent on killing him to extract the Mother Box, Victor Stone is at the center of the conflict and it’s up to the fellowship to protect him until he completes his goal.

Much like Cyborg being Frodo, Superman’s parallels with Gandalf are also striking. Gandalf is the most powerful member of the Fellowship; he also presents the clearest danger to Sauron. With Gandalf leading the Fellowship, the group had a true north to follow and always had an optimistic view of their journey. All of that changed when Gandalf sacrificed his life in order for his friends to survive and continue the fight. Superman’s opening sequence was already going to have heavy Gandalf parallels – yet, it goes even deeper than that. If we try to superimpose The Lord of the Rings trilogy to Snyder’s Justice League plan, the Snyder Cut would roughly align with The Lord of the Rings: The Two Towers.

In this installment, the Fellowship is reeling from the death of Gandalf. While his sacrifice let them survive, his lack of presence is a huge loss for the team. The opening sequence of both films featured the death of their strongest hero shown in a new light, to reveal new truths. Yet, it was not the end of their stories. The primary antagonist of both films is the second in command, so Saruman and Steppenwolf. Each side would have prevailed if not for the return of the hero to turn the tide. If the return of Gandalf at the Battle of the Hornburg at the end of the film is any indication of Superman’s role in the Snyder Cut, we can rest easy knowing Superman would be at his most heroic in the film.

With a 214-minute runtime, there is really no telling how many more parallels actually exist in the Justice League Snyder Cut to The Lord of the Rings. It’s clear Snyder was intent on creating a full mythological saga using these iconic DC characters, giving audiences something they simply have never seen before from the medium. By taking inspiration and drawing parallels from The Lord of the Rings, the Justice League Snyder Cut was going to be something that would’ve changed how we look at these characters.

Next: Every DC Character Confirmed (But Not Seen) In Zack Snyder’s DCEU

Sheraz Farooqi is a Feature Writer for Screen Rant and a Rotten Tomatoes approved film critic. Sheraz also writes for The Hollywood Reporter and has been a guest speaker on AJ+ and BBC News. Sheraz also serves as Editor-in-Chief of ComicBookDebate.
Sheraz strongly believes in having more diverse voices injected in the film coverage industry. He has led multiple initiatives like the Black Panther Challenge, raising $5000 and taking an entire middle school in Bronx, New York to see the film, and a Hospital Toy Event, donating hundreds of superhero action figures to a hospital in New York City. Sheraz also leads superhero workshops across NYC, teaching kids literacy skills and confidence building through iconic characters
Sheraz has a passion for all things DC and Marvel but as a particular love for Superman. Many of his bylines are focused on the Man of Steel as he delves into the importance of these characters to society. You can fins Sheraz at @SherazFarooqi_ on all platforms.