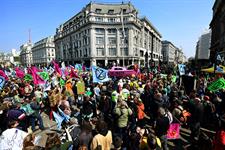 A global survey of civil society freedom has said activism is being increasingly repressed.

People Power Under Attack is published annually by Civicus, a global alliance of civil society organisations and activists based in South Africa that works to strengthen citizen action.

The latest document rates the extent to which states respect the right of citizens to associate, assemble peacefully and freely express their views and opinions.

The 2019 report, published last week, continues to rate the UK as “narrowed”, which is the second-highest of five rankings.

Twenty-one European countries achieved the highest ranking of “open”, 20 are “narrowed”, six are “obstructed”, four are “repressed” and three are “closed”.

The only changes in Europe are for Malta, which has been downgraded from open to narrowed, and Moldova, which is upgraded from obstructed to narrowed.

Globally, two countries have improved their ratings and seven have worsened.

“Since our previous report, published in November 2018, space for activism has reduced: only 3 per cent of the world’s population now live in countries with open civic space,” the report says.

The document describes 2019 as “a year of protest and pushback against protest”, and says “the fundamental right to peaceful assembly is under concerted attack across the world”.

It says: “The growing disrespect for protest rights underscores an alarmingly normalised intolerance of dissent by states.

“Many states have become brazen in silencing critical uprisings that threaten established political and economic power.”

19 of the best free things to do in Dublin
All the Beating Hearts
6 Things to Keep in Mind Before Buying High-End Luxury Products Online
The Sun Walks Down
‘The Last Of Us’ Recap: Bill & Frank’s Riveting Story Is Revealed As Joel & Ellie Make Their Way To Them