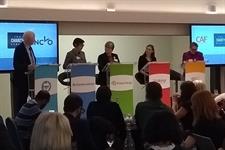 Criticism about the amount of government spending that goes on the National Citizen Service and a suggestion that each small charity should be required to set up a Facebook page that includes basic information about the organisation were among the ideas put forward by politicians last night.

The Charity Debate, organised by the Charities Aid Foundation and the National Council for Voluntary Organisations, brought together representatives of five of the main political parties for a question-and-answer session in Westminster.

Many of the responses went over familiar ground, such as a pledge from Vicky Foxcroft, the shadow charities minister, that a Labour government would repeal the lobbying act and a promise from Baroness Barran, the Minister for Civil Society, that the government’s Civil Society Strategy would unlock potential in communities.

Baroness Barker, the Liberal Democrat spokesperson for civil society, was among those who criticised the costs associated with the government’s National Citizen Service, which has received about £1.5bn in government funding since 2010.

Barker said she remained “extremely critical” of the scheme, which she said had “consistently failed to meet targets, is very expensive and doesn’t hit the communities that need it the most”.

She also criticised the move to establish the NCS Trust, which runs the scheme, as a royal charter body, saying it was “an act of vanity by the government at the time”.

Barker said she would prefer instead that some of the money spent on the NCS would go to uniformed organisations to help them become more inclusive, but also to support local volunteer training schemes.

Foxcroft, Labour’s parliamentary candidate for Lewisham Deptford, said 95 per cent of the government’s spending on youth work went through the NCS.

She said it was “an absolute disgrace” that she had put requests under the Freedom of Information Act for information about spending around the NCS but had not received answers.

“These are public funds,” she said. “We should know how it is being spent when there is so much of this money in one area.”

She said Labour was committed to establishing a fully funded national youth service from which young people could receive year-round youth work rather than take part in a short-term scheme, as with the NCS.

The Brexit Party MEP Matthew Patten said he had mixed views about the NCS because volunteering was a great opportunity for young people to make a contribution to society. “But it concerns me that the NCS has sucked resources from other parts of the overall charity budget, not just from volunteering,” he said. “And, frankly it’s been most successful for young people who mostly need it less, and less good at reaching hard-to-reach kids.”

Barran said the NCS was “an important element in building a fabric that encourages social action and volunteering among young people”.

She said: “I think I’m right in saying that the evidence is very strong that if children start volunteering by the age of 10, the chances of them carrying on through their lives are much greater.

“The NCS has been a very important part of that and a lot of work has been going on to develop that.”

Asked what their party would do to support small charities, Barker said she wanted the Charity Commission to do more to signpost resources for such organisations.

But she added: “I think it’s not unreasonable to ask that every small charity should at the very least have a Facebook page on which they are required to put their constitution, their accounts and their annual report.”

But Patten said he was against this suggestion.

“I think anybody running a small charity has so much to do, and adding complexity by requiring them to do other things is impossible,” he said.

“We should be asking them to do less so they can focus on what they do. We should be taking those things out of small charities in the same way that we do for small businesses.”

Foxcroft said a Labour government would increase funding for local charities by ensuring that local councils were properly resourced, and it would make sure that small charities were involved in decision-making around local procurement.

Responding to a question about how the panel would ensure the voluntary sector could play a full part in democracy, including campaigning and advocacy, Patten and Barker both said including charities in the lobbying act was a mistake.

“I think we should take charities out of that law,” said Barker. “But at the same time it would be helpful for there to be a clear code of practice for charities about how they engage in election campaigns.”

Foxcroft said a Labour government would repeal the act.

Barran said she did not feel that charities were constrained by the lobbying act, but the sense of loss of agency that was suggested in the original question was “really important for us to listen to and hear and respond to”.

Also speaking at the debate was Caroline Russell, leader of the Green Party at the London Assembly, who said her party would increase the commitment that the government spends 0.7 per cent of national income on aid to 1 per cent.