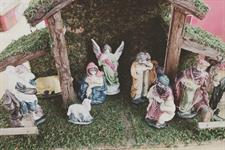 The Salvation Army is on the hunt for baby Jesus after a figure of him was stolen from a nativity scene on display at one of the charity’s shops.

A statement from the charity said that on Tuesday the manager of its store in Peterborough noticed the miniature of the child had gone missing, leaving the set, which was on sale for £12, virtually worthless.

It came just days after thieves broke into the shop and smashed the till, but ended up making off with a collection tin with just £1 inside.

The store, which was only opened in April, acts as a local support hub for vulnerable people and families in need, providing warm clothing and household essentials plus a listening ear, the charity said.

Major Gary Chaundy, minister of Peterborough Salvation Army, said: “It’s heartbreaking that someone would steal the centrepiece to Christmas especially when our faith in Jesus is the reason we feel called to serve our community through this shop.

“All we’ve been left with is a virtually worthless nativity – no-one wants to buy a set without the most important person in it.”

But he said he hoped that the individual responsible for the theft was a traditionalist who felt Jesus should not be in a nativity scene before Christmas and he would reappear in time for the big day.