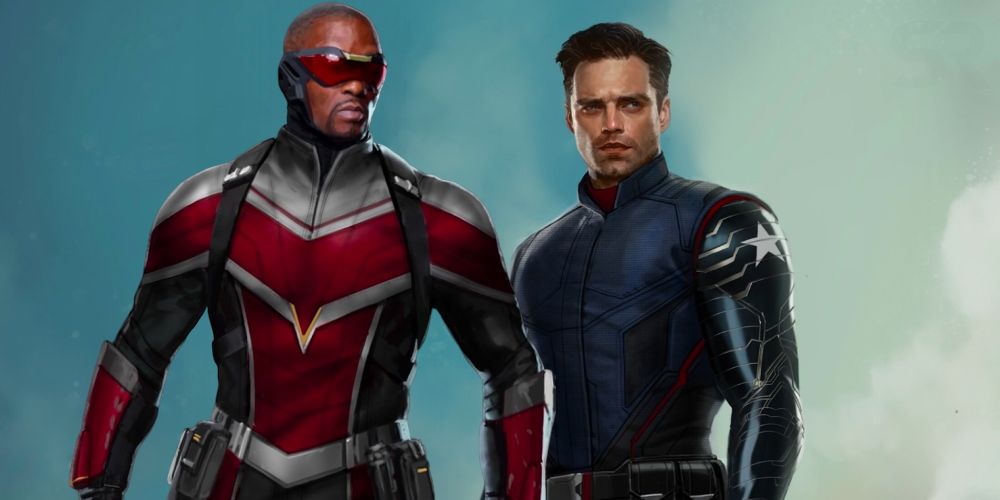 However, the first Marvel Studios TV show to release will be The Falcon and the Winter Soldier in Fall 2020, starring Steve Rogers’ closest allies, Sam Wilson (Anthony Mackie) and Bucky Barnes (Sebastian Stan). It will take place following the events of Avengers: Endgame, in which Steve passed the Captain America shield and mantle to Sam. In addition to the two heroes, The Falcon and the Winter Soldier will see the return of Daniel Brühl as Baron Zemo and Emily VanCamp as Sharon Carter. Further, it’ll introduce Wyatt Russell as John Walker aka U.S. Agent.

Now during the Marvel Studios panel at CCXP, Feige was on hand to preview The Falcon and the Winter Soldier, which is currently filming, and unveiled the first images of the Disney+ series.

As was the case with Falcon and the Winter Soldier set photos of both Stan and Mackie, these first official images don’t reveal much aside from the characters in normal clothes. It does appear they’re working together on something, though it’s unclear what exactly that mission could be. No doubt it’ll eventually lead them to face off with Baron Zemo, who’s serving as one of the major villains in The Falcon and the Winter Soldier. However, with the inclusion of U.S. Agent, and reports that the series will include a storyline in which the government is hesitant to acknowledge Sam Wilson as the new Captain America, Zemo won’t be the only thing the super-friends will have to contend with.

Further, these photos don’t reveal nearly as much as The Falcon and the Winter Soldier concept art that was included in the Disney+ Expanding the Universe Marvel special. Those included new costumes for Sam Wilson and Bucky Barnes, neither of which are on display in these first look images out of CCXP. The concept art also included U.S. Agent’s Captain America-style costume. However, since costume and style designs can change after concept art is created, it’s possible Falcon, Winter Soldier and U.S. Agent will don different suits. For now, fans will have to wait and see what all the characters’ costumes look like in the Disney+ series. But with The Falcon and the Winter Soldier filming now, and set to release in Fall 2020, hopefully fans won’t have to wait too long to see more from the Marvel TV show.

Next: Marvel Forgets Bucky Is A Super Soldier (& Needs To Use Him Better)

The Falcon and the Winter Soldier releases Fall 2020 on Disney+.

Molly Freeman is the lead news editor of Screen Rant and one of Screen Rant’s Rotten Tomatoes Tomatometer-approved movie critics. She’s been writing for Screen Rant since 2014 and has appeared on the Total Geekall podcast. Previously, she’s written entertainment news for Bustle and had personal essays published on HelloGiggles and Femsplain.

A graduate of Ithaca College’s Journalism program, Molly originally planned to be a music journalist before moving into entertainment journalism after spending so much of her downtime binge-watching all manner of movies and TV during her formative years. Still, she enjoys every chance to put her music and musical theater knowledge to good use, particularly when it intersects with her love of superhero movies.

Beyond that, Molly spends her free time reading young adult and romance novels, rooting for the New York Rangers hockey team (LGR!) and going out to brunch. Follow Molly on Twitter and Instagram @mollyrockit, or contact her directly: molly(at)screenrant(dot)com.