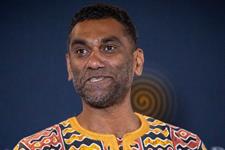 Kumi Naidoo has resigned as secretary general of Amnesty International because of ill health.

Naidoo announced to his 52,000 followers on Twitter yesterday he had been forced to make the “painful decision” to relinquish the role he took up just 16 months ago.

He is due to continue working for the human rights organisation until January and will then go on medical leave, according to a statement from Amnesty International, which is the London-based international secretariat for 50 national sections worldwide.

“It is with a heavy heart that I have taken the decision to step down from my position,” said Naidoo.

“Now more than ever, the organisation needs a secretary general who is fighting fit.

“Due to my health, I have no choice but to take this painful decision and step down. I need to recover my health and figure out a more sustainable way to continue to contribute to the struggle for justice in the future.”

Staff were told the news at 1pm yesterday.

In a statement, Amnesty International said Naidoo made his decision “following medical advice after a pre-existing medical condition worsened in recent months”.

It added Naidoo intended to “honour several longstanding commitments in his capacity as outgoing secretary general” in December, health-permitting, before starting “a period of medical leave”.

Asked if the charity was aware of his medical condition during the recruitment process, a spokeswoman said that was a confidential matter.

The spokeswoman said Naidoo would service out a notice period in line with his contract and depending on his medical leave.

She said further information on this was confidential because it was a personal matter.

The spokeswoman said the international board would determine the full process for recruitment “in the coming days”.

The news comes at a turbulent time for Amnesty International, which plans to make up to 20 of its 650 staff redundant to tackle a reported £17m budget shortfall.

Strike action was averted last month when a ballot failed to reach the voting threshold.

Sarah Beamish, chair of Amnesty International’s international board, said in a statement: “It is with reluctance, but understanding, that we have accepted Kumi’s resignation.

“During his tenure as secretary general he has shown true leadership helping us shape our next global strategy and ensuring that we can meet the human rights challenges facing the world.”