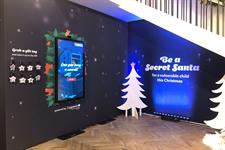 Action for Children has opened an interactive pop-up store in London’s Covent Garden as part of its Be a Secret Santa fundraising campaign.

The previously vacant store, donated for free by the property company CBRE, opened yesterday and will operate until 18 December.

Visitors watch a giant screen showing various festive photos and, based on their reactions, will be recommended a Secret Santa gift to buy on behalf of the charity.

The gifts start at £10 for a hot meal and go up to £60, which gives a homeless young person a bed for the night.

The store, which is open from 10am to 8pm on weekdays and Saturdays and from 12pm to 6pm on Sundays, also sells Action for Children “happy” and “safe” T-shirts and jumpers.

This is the second year Action for Children has run its Be A Secret Santa Christmas campaign, which encourages people to give gifts to vulnerable children.

A spokeswoman for the charity said it had previously opened pop-up retail stores called 1869 – named after the year the charity was founded by a methodist minister – but this was its first interactive pop-up store.