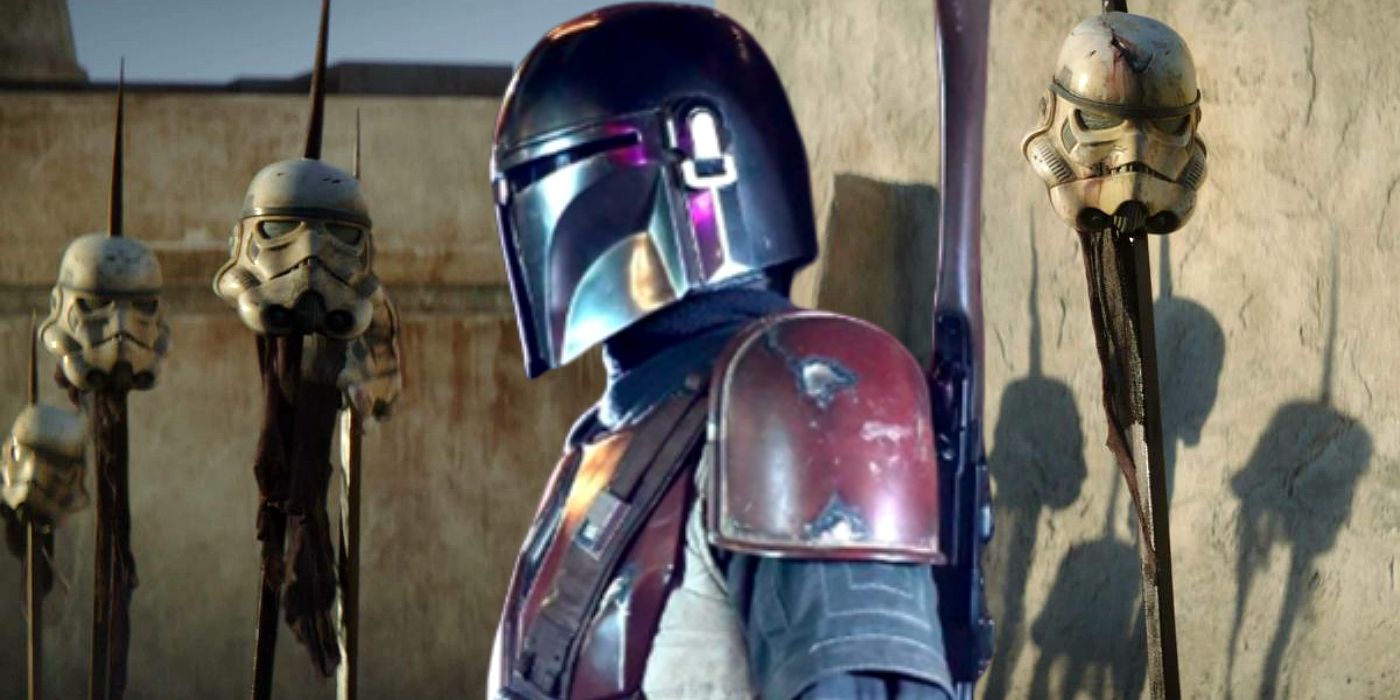 WARNING: The following contains spoilers for The Mandalorian season 1, episode 5.

The Mandalorian‘s latest episode featured the Tusken Raiders, also known as Sand People, and the show just significantly change their culture from what Star Wars had previously established. Disney+’s live-action Star Wars show continues with a fifth outing titled “The Gunslinger”, directed and written by Dave Filoni (who also directed the show’s premiere). This is also the first episode in the series not written by creator Jon Favreau.

After fleeing Sorgan in last week’s The Mandalorian, where they met ex-Shock Trooper Cara Dune (Gina Carano), Pedro Pascal’s Dyn Jarren and the mysterious baby Yoda set off on a new adventure as they continue to shake off essentially the whole Bounty Hunters Guild going after them. One was able to follow them to the agrarian planet, and the latest episode kick-started with another one on their tail. Following an intense one-on-one space battle, the pair made a pit stop on Tatooine to have the Mandalorian’s ship checked. While biding his time on the iconic Star Wars planet, Dyn visited Mos Eisley cantina in the hopes nabbing a new job, where he met a new bounty hunter Toro Calican (Jake Cannavale), who roped him into a shotgun mission to get a new bounty - Fennec Shand (Ming-Na Wen).

Related: The Mandalorian Theory: Who Episode 5’S Mystery Character Is

On their way to target, they encounter some Tusken Raiders. Both Dyn and Toro know how territorial the Sand People can be. Instead of aggravating the situation, the Mandalorian negotiated with the Tatooine indigenous people through sign language to allow them safe passage through their land. The ruse worked in exchange for the rookie bounty hunter’s binocs, which Dyn willingly gave the Tusken Raiders. The fact that Dyn was able to hatch a deal with the hostile local settlers contradicts previous assumptions that they’re nothing but primitive mindless creatures.

First appearing in Star Wars: A New Hope, the Sand People has been depicted us fearsome desert savages. Aside from attacking Luke Skywalker (Mark Hamill) only to be saved by Obi-Wan Kenobi (Alec Guinness) in the original film, they’re also behind the death of Shmi – Anakin Skywalker’s (Hayden Christensen) mother after they kidnapped her from her home. Throughout Star Wars history, the creatures only communicated among themselves and not with anyone else, which makes their dignified and civil discussion with the Mandalorian quite surprising.

Aside from the significant reveal with regard to the Tusken Raiders in The Mandalorian, their interaction with Dyn is also an indication that somehow, he knew that he could negotiate with the Sand People. So while the Star Wars franchise has never portrayed them as a people who are able to carry an intellectual conversation, perhaps they galaxy knew this all along – otherwise, maybe the Mandalorian just had previous run-ins with them that taught him how to best handle the violent people.

The Mandalorian‘s decision to set an entire episode on Tatooine is a great way to tie-in the live-action show to the bigger Star Wars universe. Throughout its run thus far, we’ve already seen various Easter eggs from the previous films and animated TV shows such as the appearance of Jawas, references to the Clone Wars era and the ice cream maker prop from Star Wars: The Empire Strikes Back. However, this is the first time the series has used a familiar location as a backdrop.

What Captain America’s “No, I Don’t Think I Will” Line Means
Related Topics
advertising
About The Author

Accidental geek but is perpetually curious, Ana rekindled her love for writing several years back and brilliantly married it with everything pop culture.
The result is a passionate young writer who could ramble (and of course, pen) about films and series multiple hours a day. She has a soft spot for The Lion King, old songs, and home design; is currently obsessed with NBC’s This Is Us, old sitcoms (The Golden Girls!); and won’t dare watch any horror films although she’s dying to see one. Though a bit late to the party and was an actual Force non-believer, she now finds the Star Wars franchise quite fascinating (fun fact: it was a crazy Jar Jar Binks/Sith theory that drew her in).
She’s currently in the middle of a Game of Thrones marathon. Sadly, the chances of her finishing in time for the final season premiere are getting slimmer by the day.