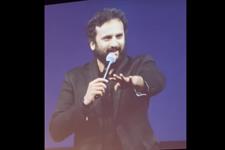 The youth and disability charity the Lord’s Taverners has said it “does not endorse” the behaviour of some audience members at a fundraising dinner where the comedian Nish Kumar was booed off stage.

Kumar was jeered and heckled by some audience members after he made political jokes that appeared to upset people present at the lunch in London on Monday.

One threw a bread roll at him, which missed, said Kumar.

He was eventually invited to leave the stage by the compere, who politely intervened and thanked Kumar for giving his time to support the event.

Kumar told The Guardian newspaper that he made what he considered to be “extremely mild” jokes about Boris Johnson, Jacob Rees Mogg, Theresa May and the Brexit process.

He said he was surprised at how easily offended the audience appeared to be, but apologised if he triggered any of them.

In my defence, it was only one bread roll and it missed me

In a statement, a spokesman for the Lord’s Taverners said the event raised £160,000, which would go towards helping disadvantaged and disabled young people.

“We are not, and never will be, a political organisation and we don’t endorse the views of the guest speakers at our events, which are their own,” he said.  ”However, nor do we endorse the reaction of a minority of audience members at yesterday’s event.

“Nish Kumar’s attendance was arranged in good faith and he gave his time for free to support the charity and our work. He follows a long tradition of comedic special guests at the event.”

Cancellations Come As Showtime To Become Paramount+ With Showtime in Consolidation, Rebrand
Marilyn Manson accused of raping underage girl in horrific new lawsuit
The Sun Walks Down
James Middleton Thanks Sisters Kate and Pippa Middleton for Going to Therapy with Him
‘Avatar: The Way Of Water’ Breaks Box Office Records For CJ 4DPlex Theaters With $85M WW