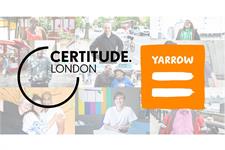 The learning disability support organisation Yarrow is set to become a subsidiary of its larger counterpart Certitude, the organisations have announced.

The London-based pair, which are both community benefit societies, said they planned to form a group next year that would be the largest not-for-profit provider of support to people with learning disabilities, autism and mental health needs in the capital.

The organisations have a combined annual income of more than £40m and support a total of 1,600 people.

Yarrow, which employs 310 people, is expected to become a wholly-owned subsidiary of Certitude, which has 1,100 staff.

The move is due to take place in April, with a final decision due to be taken on the proposal this month.

Aisling Duffy, chief executive of Certitude, will continue to lead the organisation and John Crawford, her counterpart at Yarrow, will become director of integration to work on establishing the new group.

A spokeswoman for the organisations was unable to provide more detail on questions including whether there would be any job cuts or redundancies as a result of the move, because discussions around the merger were ongoing.

Duffy said in a statement: “Expansion across London is part of Certitude’s forward-thinking strategy and our comparable philosophies and similar approach mean this merger makes good sense for both parties.

“Our collective London presence will provide greater opportunities to engage commissioners, communities and businesses in delivering great, inclusive support and staff across the group will benefit from an expanded peer network to share expertise and support.”

Montblanc Ushers the Lunar New Year With the Legend of Zodiacs the Rabbit Limited Edition 512
‘Avatar: The Way Of Water’ Swims Past $2B Worldwide; Chinese New Year Kicks Off & ‘Puss 2’ Nears $300M Global – International Box Office
China looks past Covid as tourist bookings surge for the Lunar New Year
‘Avatar: The Way of Water’ is the third James Cameron movie to gross $2 billion
11 Best Leather Wallets From Handmade To Budget-Friendly In 2023