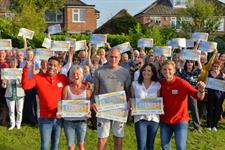 The People’s Postcode Lottery has announced that it has raised more than half a billion pounds for good causes since it began in 2005.

The money has been used to fund more than 7,500 good causes, ranging from grass-roots community groups to national organisations, such as the cancer charity Maggie’s, WWF-UK and Dogs Trust.

People pay £10 a month to play using their chosen postcodes for the chance to win cash prizes. Winning postcodes are announced every day.

A minimum of 32 per cent from each subscription goes to good causes.

Laura Lee, chief executive of Maggie’s, which was one of the first charities to benefit, said it had “helped us to provide life-changing support for thousands of people living with cancer across Britain”.

The broadcaster Sir David Attenborough described the sum as “a truly staggering amount”.

He said: “As a vice-president of Fauna & Flora International – one of the many charities that benefit from players’ support – I understand very well just what this support means for our planet’s most threatened species and ecosystems.”

The actor Dame Emma Thompson, an ambassador for the Helen Bamber Foundation, said: “I really do not know where we would be without the support of players of the People’s Postcode Lottery.”

Other celebrities, including the actors George Clooney and Olivia Colman, sent their thanks to the people who take part every month.

Clara Govier, managing director at the People’s Postcode Lottery, said: “This is a vitally important milestone for charities across Britain and beyond.

“The People’s Postcode Lottery was created to raise funds for charities and good causes, and we’ll continue to work tirelessly to do exactly that.”