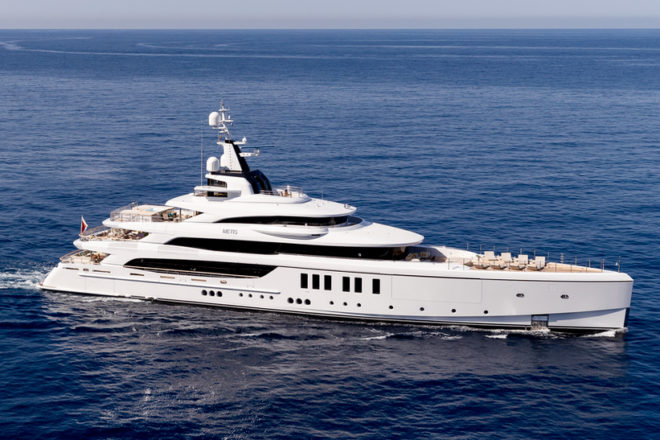 The yacht now known as Metis started off as FB276, a 63m steel hull with an aluminium superstructure built on spec by Benetti using the same pre-engineered platform as used on its award-winning 11.11. While starting construction on a yacht this large without an owner may seem risky, Benetti has found that it pays off in more ways than one.

Marco De Cosmo, the Project Manager for Metis, explains: “Stepping into a project whose construction has already begun saves a huge amount of time for owners. And working within the tried-and-true parameters of a pre-engineered hull platform brings advantages both to the shipyard and to the owner because there is no wait for prototyping.”

Metis’ eventual owner signed the contract in August 2017 and took delivery of a yacht that was uniquely ‘his’ in April 2019, before the 207-footer had her world premiere at the Monaco Yacht Show in late September.

Benetti was sure of its choice to start FB276 on spec and knew that they wanted interiors with character. For that, the company turned to old friends, the London-based design firm Bannenberg & Rowell.

“We do appreciate the trust placed in us by Benetti with this project,” says Dickie Bannenberg, the second generation of his family to work with the shipyard, following his father Jon, who designed the famous Benetti yachts Nabila (1980) and Multiple (2002). 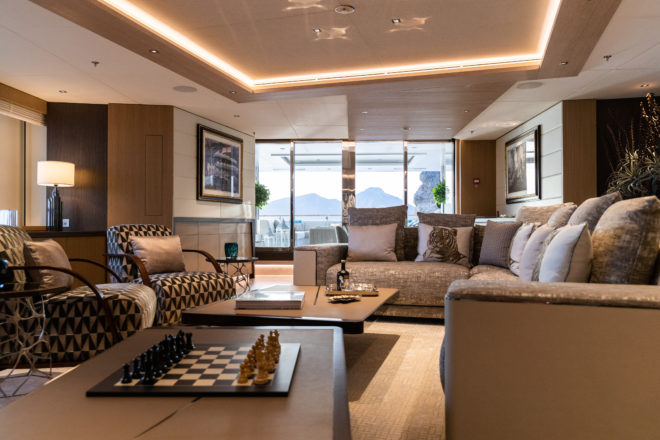 To enhance the effect of the asymmetrical layout, Bannenberg & Rowell also skewed the ceiling drops and floor insets in sync with the furniture

“By and large, we were given complete freedom to come up with an interior theme, but the design still had to be commercially viable and appeal to a wide customer base.

“We have quite a lot of experience with this kind of build, so I like to think that we’re aware of the commercial sweet spots and know how to build an interior that appeals, but isn’t bland. We know the sensitivities.”

Kurt Lehmann, Chairman of Yacht Moments, introduced the German owner to Benetti and soon hull FB276 became Metis. Although she had already been built and faired, she was far from completion, as exterior designer Giorgio M. Cassetta explains.

“I had designed the yacht as a four-deck superyacht with strong vertical lines offset by an arching tier of fashion plates,” Cassetta says. “But the owner wanted a gym with both indoor and outdoor spaces, and he wanted it at the highest point of the yacht – so we added a deck.” 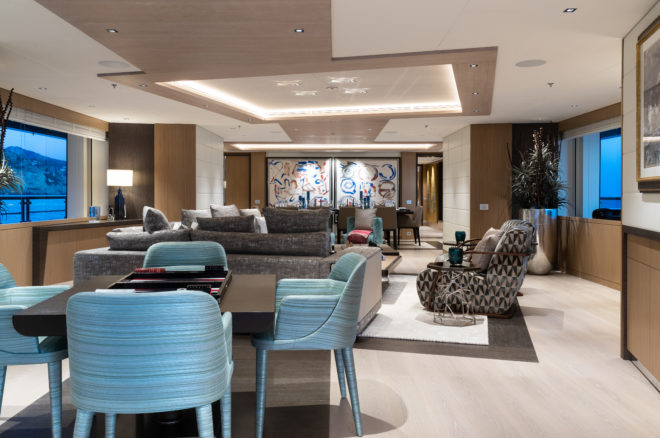 The saloon embodies the use of offset angles

While this request meant that the whole design and engineering team had to go back to the drawing board, Benetti wasn’t put out. In fact, the company prides itself on being able to accommodate new requests as a tour of Metis showcased.

Boarding the yacht from the aft passerelle, the first space that welcomes guests is a cockpit on the main deck with deep couches and a large coffee table. This symmetrically planned space gives no clues as to what’s waiting inside, starting with the main saloon.

OFF CENTRE, ON POINT

The interiors that Bannenberg & Rowell designed are rotated 30 degrees from the yacht’s centreline, a daring arrangement that gives the yacht special character and appeal.

“We wanted to do something edgy,” Bannenberg explains. “We had played with asymmetrical interiors before, but just in the hallway and owner’s cabin of a large yacht. 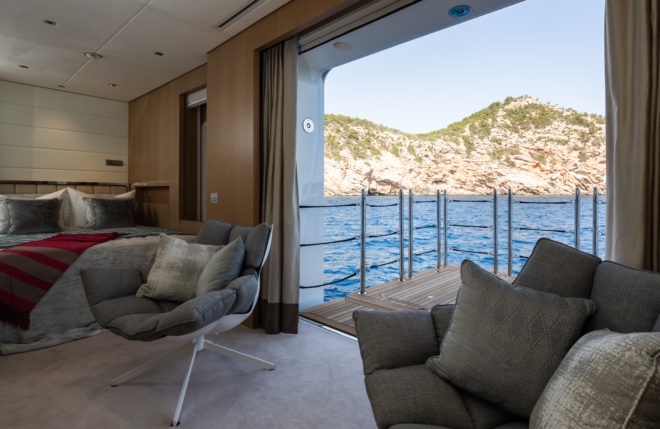 “The northern European shipyard that built it was puzzled, but Benetti got it and let us go with it. This layout is more interesting, more dynamic and opens new vistas. You’re not just looking fore and aft, you’re looking through the yacht and out to the sea around it.”

While Bannenberg & Rowell played with expectations on layout, they used a consistent palette of tones and materials to create a sense of continuity throughout the yacht.

“We can’t design just to hose money around, but at the same time, anyone who is buying a boat from a shipyard like Benetti is expecting something very special,” Bannenberg says. “You have to tread that careful line, keeping a good sense of luxury and bespoke.”

Aboard Metis, that translates to neutral base tones set off by Texalium carbon-fibre inserts and stainless-steel accents. To these, the owner added several pieces from his collection of art by contemporary German artists and called in his decorator, Birgit Otte Interior, for consultancy on fabrics and loose furniture. 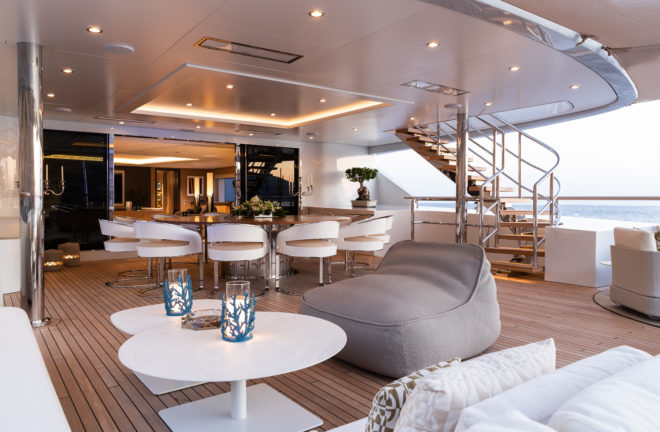 On the upper deck, or owner’s deck, the expansive covered aft area has a large, circular dining table for 10 and lots of seating space

The owner requested significant changes in the main and upper-deck guest accommodation to meet his specific needs. Fore on the main deck, he asked Benetti to transform the full-beam owner’s suite into a nursery, complete with a play area, a twin children’s cabin and a nanny’s cabin. It could well be the only nanny’s cabin afloat with its own opening balcony.

Fore on the upper deck – or owner’s deck – he asked for a large suite with back-to-back owners’ cabins, and his and hers bathrooms running beside them. Measuring over 160sqm, the suite’s fore area enjoys incredible views across the 55sqm foredeck that can double as a touch- and-go helipad.

In the skylounge on the same level, the off-kilter furnishing arrangement creates, among other things, the perfect nook for a piano, and continues the asymmetrical theme established in the main-deck saloon. 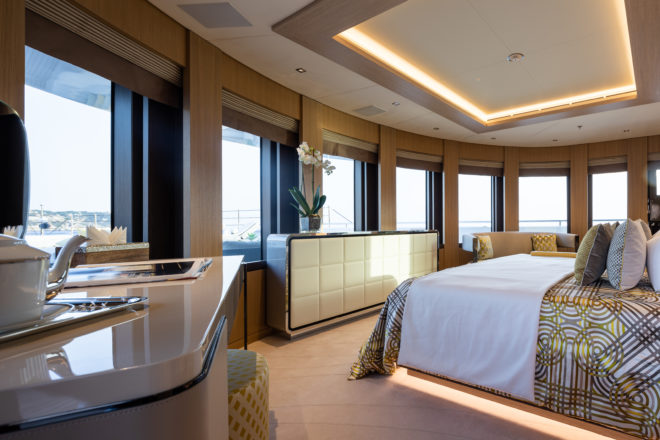 The owner’s accommodation on the upper deck has two double cabins, his and hers bathrooms, and expansive views, including over the foredeck

But it’s in the beach club on the lower deck where the asymmetry works best. By moving the tender garage fore, Benetti left a large aft area free for enjoying days on the water. When the transom and the side terraces are open, Bannenberg & Rowell’s furnishing arrangement makes movement fluid and brings the whole area into close visual contact with the sea.

The yacht’s main engineering challenge and its crowning glory is the gym on what’s termed the observation deck. Here, Cassetta showed that both he and Benetti’s engineers can do almost anything, including adding new decks to yachts that are practically finished.

“The owner wanted to be able to train both indoors and out, and he wanted the views,” Cassetta recounts. “The shipyard recalculated the yacht’s centre of gravity and I designed the new gym, integrating it into the yacht’s lines. The trick was to create a space that looked like it was part of a larger mast.” 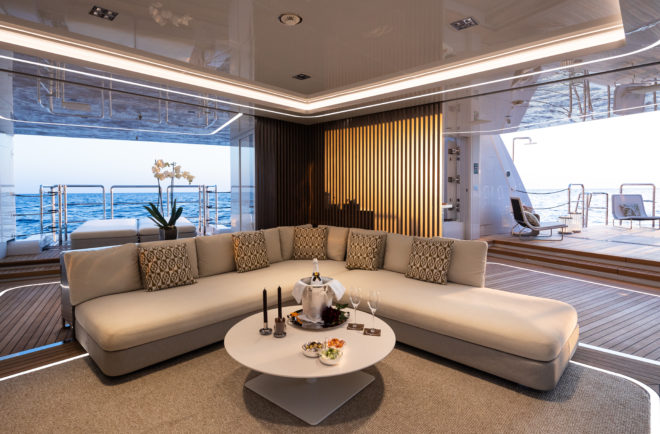 The beach club benefits from openings aft and to the sides