Built across over 100 small islands in the Adriatic Sea’s lagoon, the capital of northern Italy’s Veneto region drowns in an exceptional tide for the third time this week. Enduring rapid wind and rainstorms, the city of Venice was engulfed in the second-highest water levels ever recorded at 74 inches (187 centimeters). Besides sinking boats, flooding business and historic structures, the floods have also reportedly claimed a life, and amassed an estimated damage of over $1 billion from the invading salt water – closing the city’s iconic St. Mark’s Square for the second time in three days as rain continued to pound down. Despite the acqua alta, the city usually returns to its original dry and tranquil state within hours. However the incessant flooding coupled with the loss of power and city closure, leaves Venice residents fearing for the potential loss of tourism. Revered for its rich artistic and historic heritage, with work by Italian Renaissance masters such as, Tintoretto, Giorgione and Titian – tourism has been the city’s bread and butter for as long as it can remember. 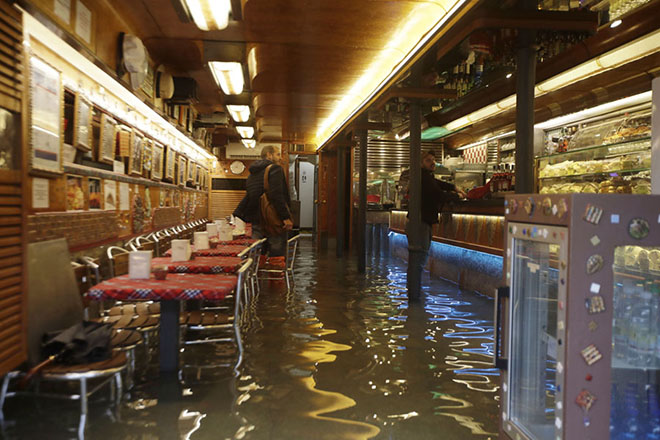 Workers found, upon assessing the damage caused by the corrosive and salty floodwater, that the ancient marble floors of St. Mark’s Basilica were chipped with missing parts of marble. As one of Venice’s most famous cathedral church for Roman Catholic Archdiocese and the best known example of Italo-Byzantine architecture, the potential long-term damage to its supporting pillars would be catastrophic for the country.

The head of Venice restoration, Mario Pianna shared his concerns, “I’m worried for the basilica, the acqua alta does not create immediate, obvious damage. On the outside, you do not immediately see anything. But it is comparable to radiation exposure. In a week, you lose your hair. In a year, you might be dead.” Among other destroyed sites were Venice’s local bookstores and libraries, housing a multitude of centuries-old work which now float the streets, soaked in salt. With studies dating back as early as 2010, reports of the “Sinking City” have only worsened each year – revealing that the weight of the city gradually compresses the soil beneath its archipelago, thinning its volume and draining its base. In other words, water levels are not only rising, the city itself is submerging.

The effects of climate change and human contribution, thus leave Venice with an accelerated expiry date. The Oppenheimer Intergovernmental Panel’s Climate Change report predicts a frequent continuation in “extreme sea level events”. What was once the occasional 100-year phenomenon, may soon become an everyday part of Venice life – making the city an inhabitable ghost town.