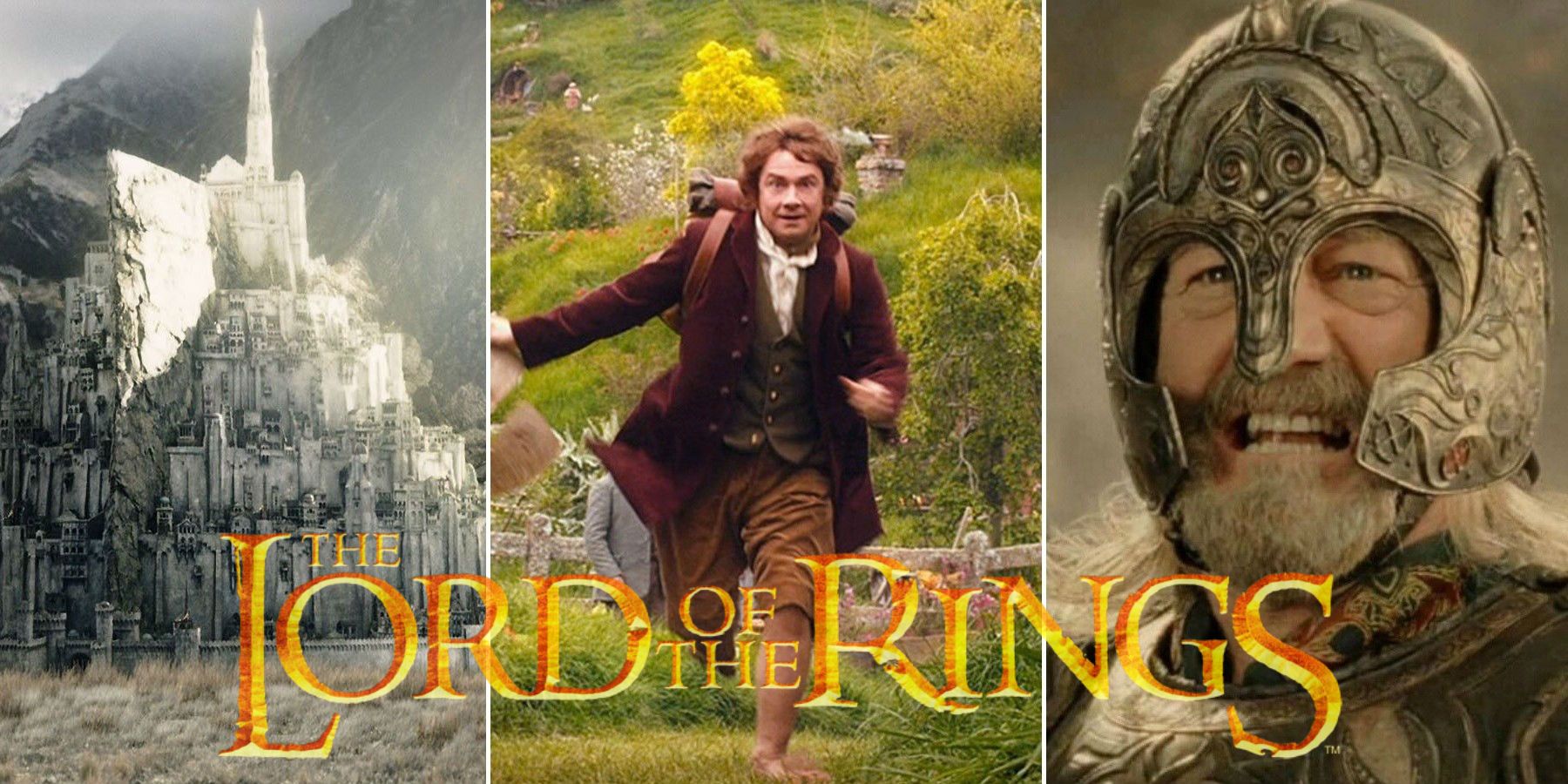 The world of The Lord of the Rings may feel as detached from reality as fiction can possibly get, but so much of Tolkien’s Middle-earth is inspired by or based on real-world cultures, locations and experiences. Beginning with the release of The Hobbit in 1937, the history and composition of Middle-earth was then developed exponentially in The Lord of the Rings, the posthumous The Silmarillion and various other writings by Tolkien that have been made public since the author’s death.

Tolkien offers such a rich and detailed picture of Middle-earth through his prose that his world lives on almost a century after its inception, arguably more popular than ever before. Moreover, Tolkien has had a virtually immeasurable influence on other best-selling fantasy writers such as Terry Pratchett, George R. R. Martin and Terry Brooks, and a major part of this enduring popularity is the vivid way in which Tolkien paints the setting of The Lord of the Rings. With extended sections of description, meticulous appendices and numerous tables, maps and charts, Middle-earth is fleshed out into a land that many fans have become more familiar with than their own country.

Related: Lord Of The Rings: What Happens To The OTHER Rings Of Power

Due to the presence of elves, dark magic and small, greedy halflings who eat their entire body weight in food before lunch, many over the years have dismissed Tolkien’s world as fanciful make-believe, but that assessment doesn’t do justice to the level of real-world influence woven throughout Middle-earth. A professor of English language and literature, Tolkien incorporated much historical and cultural inspiration in his fiction, all of which helps to make The Lord of the Rings feel more realistic and compelling in the minds of readers. Here are some of the biggest real-world influences behind the creation of Middle-earth.

Locations And Cultures Of Middle-earth

Tolkien admits in his published collection of letters that Middle-earth is intended to directly mirror Earth’s approximate geography, with most major locations in the story representing a country or continent in the real world, both in terms of placement on the map and recognizable qualities. The Shire, for instance, is Tolkien’s home of England. The idyllic gardens, plentiful taverns and farming lifestyle denote the stereotypical picture of rural England, particularly in the 1930s, and Saruman’s Scouring of the Shire is explicitly intended as a social commentary on the industrial expansion that took place throughout the early-mid 20th century. The author himself compared the Shire to a Victorian era “Warwickshire village,” and also stated that his hometown of Sarehole acted as a visual reference for Hobbiton. That ethos shines through in the Hobbits’ simple, local, self-contained folky lifestyle.

Gondor seemingly takes its cues from the Eastern Roman Empire (Arnor being the Western), with towering, impressive architecture, a grand army and a history of colonizing nearby lands. Although Aragorn is far from the traditional Emperor stereotype, both Gondor and Roman Italy share a rigid system of leadership whereby a single figure ruled without question over the entire Empire. It has also been pointed out that Gondor’s Numenorean history is a close facsimile of Roman mythology’s story of Aeneas. In particular, Gondor borrows lore and qualities from Byzantium, including the warning fire beacons and a legend of a returning king who would restore the land’s former glory. Consequently, the people of Rohan have been compared to the Goths (the northern Europeans who resisted Roman rule, not graveyard-dwelling Marilyn Manson fans) and Tolkien himself acknowledged the Byzantine influence on Gondor in one of his published letters.

Relative to Gondor, Mordor would then line up with Sicily, and while few would suggest that this island hides an evil dark lord intent on world domination, it’s interesting that Sicily is home to an infamous, fiery volcano in Mt. Etna, perhaps the most renowned and dangerous in the world. Strangely, however, it was another of Sicily’s active volcanoes, Mt. Stromboli, which Tolkien directly cited as a real-world Mt. Doom. Other less prominent locations in Tolkien’s mythology also possess parallels in the real world; the Haradrim, for example, hail from a large continent to the south, heavily implied to be Middle-earth’s Africa, accounting for their use of Oliphaunts and tribal social structure.

Related: What Happens To Aragorn After Lord Of The Rings

World War I In The Lord Of The Rings

Tolkien’s experiences as a soldier during the First World War understandably shaped his literary magnum opus, and it’s no coincidence that The Lord of the Rings centers around a “war to end all wars.” However, the influence of Tolkien’s time in the trenches runs far deeper than the basic premise. The author’s grandson, Simon Tolkien (via BBC), notes several connections between the real-life horrors of the Great War and the struggle of elves and men against a great, unseen evil. The industrial machinations Saruman and Sauron use to manufacture and equip their armies are comparable to the lethal technological advances made throughout World War I, while Simon likens the bond between the 4 main Hobbits as a representation of the camaraderie between soldiers forced to spend days and nights in close proximity. Perhaps more significantly, Frodo’s inability to return to everyday life after his experience in Mordor is said to be a reflection of how veterans would struggle to assimilate back into civilization once the war had ended.

Tolkien himself insisted the the wars of the real world did not directly correlate to events or specific plot points in The Lord of the Rings and famously rejected allegory in his works, but the thematic comparisons are clear, and certain other connections have been drawn over the decades.

The Dead Marshes and Mines or Moria, for instance, are depicted very much like recorded descriptions of WWI trenches – almost impossible to traverse and haunted by lingering faces in the gloom – and Tolkien’s first stories of dragons came shortly after the introduction of tanks to the war, adding to Lord of the Rings‘ critical undercurrent aimed at industrialization. Potentially the most telling manner in which Tolkien’s personal experiences arise in The Lord of the Rings is through the harrowing imagery the author uses during battle scenes, or while Frodo is on the final leg of his journey to Mt. Doom. Tolkien plays on all 5 senses to create a clear, lingering image and his descriptions could apply to the trenches of the Somme as much as they do the dark corners of Middle-earth.

With a well-documented lifetime interest in language, it’s little surprise that Tolkien invested much time in crafting his own dialects for the various races of The Lord of the Rings, and one of the most notable of these is Quenya. An ancient language spoken by elves, Quenya is often likened to Latin, but this more to do with its sparse usage in Middle-earth, than its actual form or construction. The closest inspiration for Quenya was actually Finnish, furthering the Scandinavian influence on The Lord of the Rings. Like Finnish in the real world, Quenya features agglutinated wording, similar grammatical rules and the two are extremely close phonetically. As Quenya’s popularity died out among the elves of Middle-earth, it was replaced by the more common Sindarin tongue, which fans often liken to the Welsh language in its sounds and phrasing.

Related: Lord Of The Rings: Origin Of The Orcs Explained

Elves aside, most of the characters in The Lord of the Rings speak in Westron, otherwise known as the common tongue. This language is essentially English, as far as the narrative framing is concerned, but Westron is, in fact, a language all of its own.

Tolkien was an expert in Old English and this played a huge role in much of the terminology used throughout The Lord of the Rings. Even the phrase “Middle-earth” can be traced back to the old English term “Middangeard.” Old English was commonly written in runes, the likes of which can be seen throughout The Lord of the Rings, but the language is most prominently used by the people of Rohan, demonstrating their more old-fashioned lifestyle compared to Westron speakers. One of Tolkien’s greatest skills was allowing these real-world influences to enrich the reader’s experience, but without making them essential to the understanding of the plot.

More: Why The Fellowship Couldn’t Use The Eagles In Lord Of The Rings

The Bounty Hunter Guild Rules (& How The Mandalorian Breaks Them)

Tags:
lord of the rings