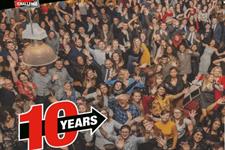 The youth charity The Challenge, which was previously the largest provider of services for the government’s National Citizen Service programme, has gone into administration with the likely loss of more than 200 jobs.

The charity said in a statement today that it was with “great sadness and considerable anger” that it had been forced into administration, just weeks after its £60m-a-year contract with the National Citizen Service Trust to provide places on the scheme came to an acrimonious end.

The Challenge, which employs 210 people, launched a £22m legal claim against the NCS Trust after losing the contract in August, with The Challenge claiming that the NCS Trust’s software system was “inadequate and/or not fit for purpose”.

But The Challenge said in a statement today that loss of the contract had pushed the charity into administration.

A statement from Bill Ronald, chairman of the Challenge Network, said the saga had been “nothing short of a national scandal”.

He said the appointment of an administrator followed five months of discussion with the NCS Trust and the Department for Digital, Culture, Media and Sport.

The discussions were an attempt to resolve the issues raised by the end of the NCS contract.

Third Sector understands that the NCS had also been approached in the days before the administration to prevent The Challenge going under, but talks had been unsuccessful.

Ronald said: “The decision to appoint an administrator was not taken lightly, but after every possible avenue had been exhausted.

“We made this difficult decision with great sadness and considerable anger at the manner in which The Challenge has been forced into it.

“It has been a testing time for everyone at The Challenge. I would like to confirm how extremely grateful I am to each and every member of the team who has worked tirelessly to bring about our vision: an integrated society where there is an understanding and appreciation of each other’s differences.

“Those charged with oversight of NCS provision have failed many hundreds of dedicated colleagues and jeopardised many thousands of opportunities for young people. It is nothing short of a national scandal.”

Phillip Sykes of RSM has been appointed to handle the administration process.

Third Sector understands that he will take decisions on the future of the legal action against the NCS and the ongoing redundancy programme at the charity.

Third Sector has approached the NCS Trust for comment.

Krista Vernoff Out as Showrunner of Grey’s Anatomy, Station 19
Barbarian’s Director Just Got A Massive Payday To Make His Second Horror Feature
Bob’s Burgers, Family Guy, and The Simpsons Renewed for 2 More Seasons at FOX
The 9 Best Fashion Brands to Build Your Work Wardrobe
The Love You Save