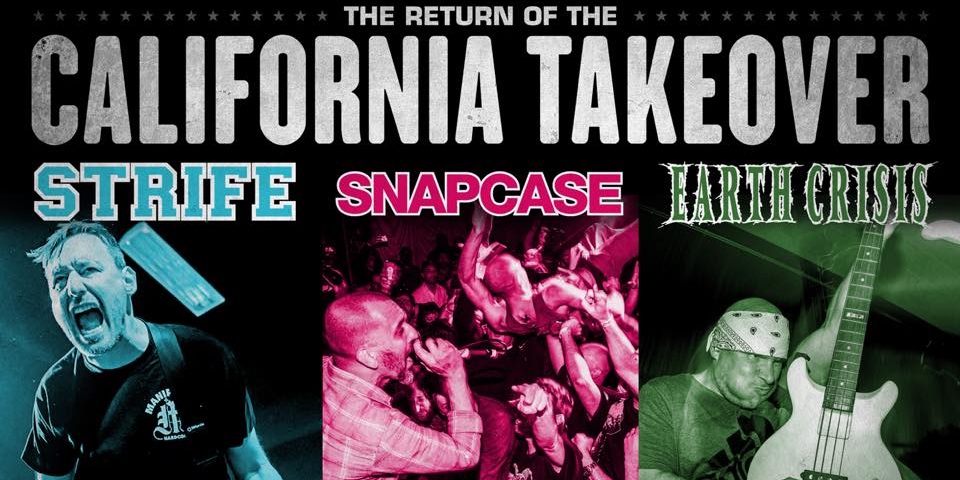 The hardcore punk trifecta of Earth Crisis, Strife, and Snapcase have announced they’ll be joining forces for the “Return of the California Takeover”. The two shows are set for February 22nd and 23rd in San Francisco and Los Angeles, respectively.

The gigs are a callback to April 1996 when Earth Crisis, Strife, and Snapcase shared the bill for two landmark concerts at the Whisky a Go Go in Hollywood and the Showcase Theatre in Corona — shows that would become known as “The California Takeover”. The label for all three bands, Victory Records, then released a live album of the Hollywood concert.

Andrew Kline of Strife told No Echo that the bands had played together on bills before the the original “California Takeover” shows, but the live album immortalized the iconic triple billing. The idea of reuniting the “Takeover” lineup had been kicked around for years but “never really panned out,” finally coming to fruition after Earth Crisis guitarist Scott Crouse reached out to Kline and “everyone was on board.”

“It’s funny to think about, but our three bands had played together so many times over the years that we didn’t really think much of it,” Kline said. “We had the idea of putting these shows together and then we pitched the live album idea to Victory. The album was recorded by the same guy that engineered One Truth and In This Defiance [Dave Jagosz], and he brought his board down to the Whisky and recorded the whole show. Don’t get me wrong, both of the shows on this run were epic, but I think the live record is really what made these shows as important as they are today.”

Tickets for the “Return of the California Takeover” are currently on sale via the venues for the respective dates at San Francisco’s Great American Music Hall and Los Angeles’ Teragram Ballroom. Check out some raucous fan footage of the 1996 “Takeover” show in Corona below.