In Marie Kreutzer’s new film Corsage (out Dec. 23), we meet Empress Elisabeth of Austria on the cusp of her 40th birthday. As the 19th-century empress once wrote in her diary, it’s the age where “a person begins to disperse and fade, darkening like a cloud.” The line is voiced in the film, revealing so much about what the protagonist, and what society at the time, made of getting older. Vicky Krieps, the Luxembourg-born star of the film and its executive producer, first brought the project to Kreutzer because she wanted to paint a contemporary picture of the empress famously known for her beauty, her corsets, and her rebellious streak. The two had collaborated on the 2016 film We Used to Be Cool, a comedy released just a year before Krieps’ breakout role in Paul Thomas Anderson’s Phantom Thread.

What can one make of a royal who is equal parts disobedient, confident, intelligent, and constrained? It’s the confluence of these traits that most attracted Krieps to this story. As a woman living in the 21st century, 39-year-old Krieps celebrates her own messiness. “I’ve kept all my edges and all the contradictions within myself. I’m still all these people. I’m still the child I was. And, on the other hand, I am a mother. I have two children and I look after them and I nurse them and I cook for them. I like to organize holidays for everyone, but at the same time, I am total chaos and sometimes I can’t even order my food right. I think I never managed, or maybe never tried, to smooth it out, to make it fit.” 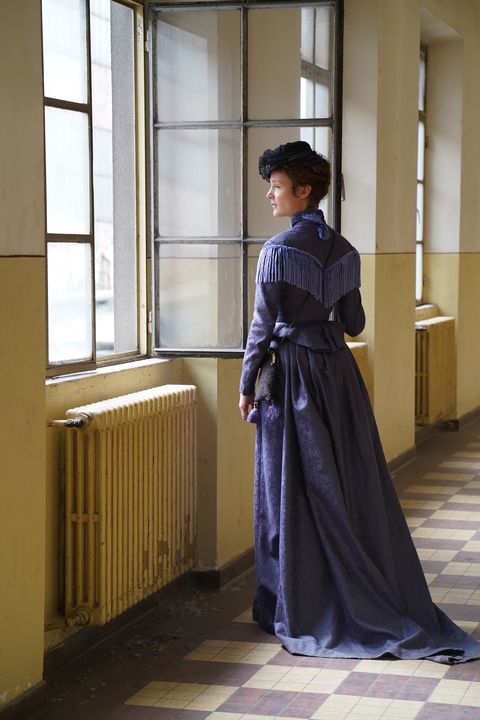 How beautiful it is, then, to embrace these contradictions—and to embody a historical figure who did the same nearly 150 years prior. “I was in need of a character that I could put all this into and be as difficult as I am and be as un-understandable as I am,” Krieps says. Empress Sissi, as she was affectionately known, is not a particularly likable character. In Krieps’ words, she could be unfair and hard on her loved ones. She craved the attention of other people and so strongly sought to control her image. But that was precisely the appeal. “I wanted to show a female character that doesn’t have to please, that doesn’t have to be explained, or that doesn’t have to fit in a box.”

Krieps first read a biography of Empress Sissi when she was 15 years old. Even then, she “could feel something was unfair about being a girl.” For her own part, she says, “I felt I could never express myself the way I wanted to. Either I was too nice or too intelligent… I think this friction that I felt between me and society, I could feel in her.”

Krieps was raised by her mother in a very free, liberated manner. “I still loved princess dresses and I would imagine having all these princes come up to my room and give me a flower,” she says. “I had these fantasies, but my mom showed me an alternative way of being as a girl.” Perhaps this perspective, this freedom, is what made Krieps realize just how timely the empress’s story could be.

Not just in the pressures and confrontations that come with turning 40. Empress Sissi was living on the cusp of the Industrial Revolution, a period of tremendous change. “I think that made her so restless,” Krieps reflects, “to know that she’s captured in a time that is not her time anymore.” We are in a similar moment of rapid transformation and consumption today, Krieps says, but compounded a hundred times. With social media, “we have built our own prison, our own corset that’s eating us. We have become so absorbed with our own image that it is, again, terrorizing us,” she says. “It’s a craziness of pleasing.” In other words, it’s a moment that’s ripe for change.

“As a society, we seem to be stuck at a similar place as she was,” she says. “We know that times are changing and we know that there’s a different time ahead of us.”

The further Krieps dove into the life of Empress Sissi, the darker and more ahead of her time this character seemed to be—until the very end. Just a night or two before her death, the empress wrote a poem in her diary. “In it she says, ‘I want to escape through a little opening,’ which, in the end, she did,” Krieps says. In real life, an anarchist stabbed her in the heart with a nail file. “I think no one knows who she was, and she herself didn’t know who she was, but I think all her life, she just wanted to get away,” Krieps says. “I found that so humble.”

In her take as Empress Sissi, behind the ever-tighter corsets and opulent braids, Krieps shows us a woman unraveling, unable to fit into her era or her role in it. She does so leaving room for viewers’ interpretations: about her marriage, her child-rearing, her thoughts, and her desires. It’s something Krieps hopes to do with each of her projects: create a dialogue with the audience. “What can I learn from you? What can you learn from me? And in what ways can we have a more open conversation? I’m just interested in using film as a way to move people in their hearts and to talk about love. I’m in love with this world and I want to share it with as many people as I can.”

Nadine Zylberberg is a writer based in New York City. She found her way through the world via movies, words, and chocolate chip cookies. After graduating from the University of Pennsylvania and Oxford, she worked at the New Yorker and the Academy of Motion Pictures, which landed her on the Oscars red carpet for a few years, wondering where they keep snacks in those dresses. She’s always in pursuit of great sample sales and even better stories.