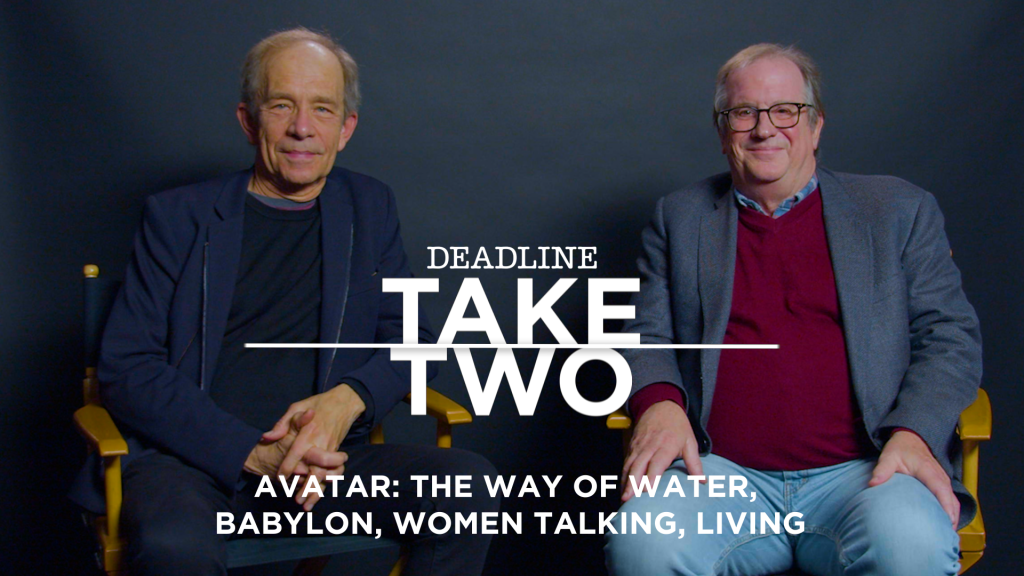 Note: Deadline presents the 44th episode of its video series Take Two, in which Pete Hammond and Todd McCarthy tackle the artistry of films just opening in theaters every weekend. Each has reviewed and written about the craft for decades and built a remarkable breadth of knowledge of films past and present. What we hoped for when we asked them to do this was a concise, mature and thoughtful conversation comparable to what we saw from Roger Ebert and Gene Siskel.

This week, Take Two takes a critical look at four of the final major releases of 2022. We examine this weekend’s juggernaut, Avatar: The Way of Water, of which we are in total agreement, and quite frankly surprised that it is as effective and affecting as it is. (Read Deadline’s review here.)

However, there is more of a split on Damien Chazelle’s latest Hollywood homage Babylon. Find out why. (Read the review here). That one opens December 23 just in time for Christmas and reviews overall so far are mixed, but this week it was nominated for five Golden Globes and nine Critics Choice Awards including Best Picture. Avatar also landed Best Picture nominations from both groups, and both Babylon and the long-awaited James Cameron sequel share one other distinction in common: they both have running times of approximately the same length, 3 hours and 10 minutes, give or take a minute here and there, but who is looking at their watch anyway? Both are visually arresting at the very least. We will tell you though if it is worth investing a collective 6 hours and 20 minutes of your life, but if you do you must do so in a theatre. There is no question that these films are not designed to be viewed on your TV screen.

We also look at a couple of, shall we say, smaller films also being released just in time for Oscar consideration. One is Sarah Polley’s intriguing Women Talking, with an exciting female ensemble, which we first saw over Labor Day at the Telluride Film Festival, and now is opening on December 23 (review here). Also out is another festival favorite, Living, with the splendid Bill Nighy as a man deciding to taste life after receiving the diagnosis that he is dying. It is an English-language remake of 1952’s Japanese Akira Kurosawa classic drama and comes from Sony Pictures Classics, also just in time to qualify for Oscars and SAG (Nighy was nominated for Golden Globes and Critics Choice Awards this week). We saw it first a year ago at Sundance. (Read the Living review here.)

Hammond has been Deadline’s Awards Columnist for the past decade, covering what now seemingly is the year-round Oscar and Emmy seasons. He is also Deadline’s Chief Film Critic, having previously reviewed films for MovieLine, Boxoffice magazine, Backstage, Hollywood.com and Maxim, as well as Leonard Maltin’s Movie Guide, for which he was a contributing editor. In addition to writing, Hammond also hosts KCET Cinema Series and the station’s weekly series Must See Movies.

McCarthy is a veteran trade publication film critic, columnist and reporter who has also written several acclaimed books and documentary films. He served two stints on the staffs of Variety and The Hollywood Reporter and extensively covered film festivals internationally for both publications. His film Visions of Light: The Art of Cinematography won the best documentary prizes from the New York Film Critics and National Society of Film Critics associations, and he won an Emmy for writing the documentary Preston Sturges: The Rise and Fall of an American Dreamer. He also directed the documentaries Man of Cinema: Pierre Rissient and Forever Hollywood.