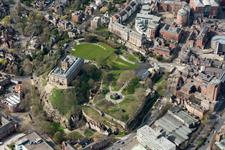 The city council is preparing to take back Nottingham Castle after it was closed and the charitable trust in charge went into liquidation.

The landmark building, which local legend says hosted the final duel between Robin Hood and the evil sheriff, closed to visitors 18 months after a £33m revamp.

The refurbishment was funded in part by a £13m lottery grant, while the trust received a total of £256,000 in four Culture Recovery Fund payments in 2020/21.

Those payments made up almost two-thirds of Nottingham Castle Trust’s £396,000 income in the same period. Its expenditure was £731,000.

In a statement on the castle’s website, the trust said: “We are saddened to announce that Nottingham Castle Trust has begun the process of appointing liquidators and the castle grounds and exhibitions will remain closed to all visitors until further notice.

“Tim Bateson and Chris Pole of Interpath Advisory have been nominated by the board to be appointed as liquidators to formally wind up the affairs of the Trust. Their appointment will take place during the course of the next 10 days.”

It added: “This is a heartbreaking day for trustees, our staff, visitors, and the city. Despite the immense dedication of staff and volunteers, the castle is now closed to visitors.

“While visitor numbers have been improving, they have unfortunately remained highly unpredictable and significantly below forecasts, mirroring the difficulties seen across the whole cultural sector.”

It said that visitor numbers had fallen “significantly below” the 300,000 a year it had targeted when it reopened in June 2021.

The trust had faced a number of controversies, including complaints about high ticket prices, poor TripAdvisor reviews, legal disputes with a former chief executive and accusations of slow responses to allegations of racist behaviour.

A city council spokesman described the news of the castle closure as “a significant blow for the city and its visitor economy”.

He added that the council would take back control of the castle and consult with partners with the aim of reopening “as soon as possible”.