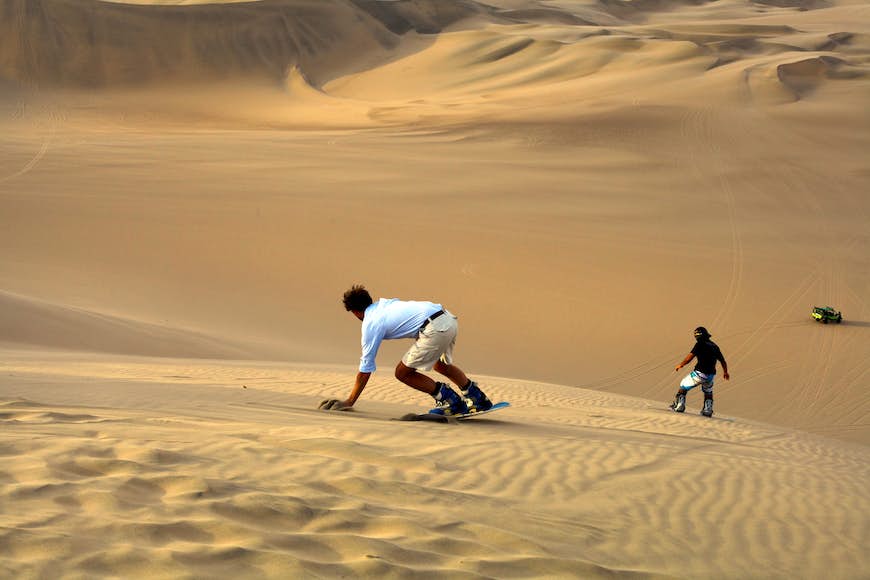 A sizzling strip of coastal desert. Endless snow-capped Andean summits. A humid expanse of rainforest mazed by mighty rivers. These three types of terrain form a triumvirate of totally different climates, ensuring every time of year is a great time to go to Peru.

This is a tradition-entrenched, festival-focused land, with at least one vibrant celebration a week to add color to your trip. Whether you’re a city-lover stopping in the famous foodie capital of Lima or an adventurer heading for the Inca Trail, you’ll find what you need to plan your perfect Peru vacation here.

Foreign travelers prefer Peruvian winter, not just because it generally coincides with their main holiday period, but because the crystal-clear weather casts the Andes, where the country’s most popular tourist sights beckon, in sharp sunlight. Fascinating festivals also occur, and the tantalizing trekking ground is dry underfoot. Adventure season is in full swing.

The ancient Incan capital of Cuzco grabs the most attention, along with the nearby Sacred Valley, where picturesque, Inca-ruin-dotted gorges invitingly thread through to the greatest site of them all: Machu Picchu. The big treks – especially the Inca Trail, but others in Sacred Valley and those in snow-bedaubed Cordilleras Huayhuash and Blanca are also irresistibly beautiful in the brilliant sunshine, but it’s peak hiking season, and they do get very busy.

Festival-goers can also attend an array of fabulous fiestas, which enliven thoroughfares in Cuzco and other regional towns on a near-daily basis, the most notable being Inti Raymi, Inca celebration of the winter solstice. Further south down the Andes, Lake Titicaca glitters like a blue jewel, with tempting tradition-rich islands.

It’s dry season in the Amazon Basin too. The sunnier weather in the cloud forest lures birdlife out into the open, including the bright orange-red Andean cock-of-the-rock, Peru’s national bird, which mates at this time. Down in the low jungle, wildlife is easier to spy than on the riverbanks, and forays down rivers like the Tambopata, near Puerto Maldonado, yield especially diverse sightings. Lower water levels mean excellent whitewater rafting conditions: the Apurimac, near Cuzco, and the Tambopata are ideal for rapids-riding.

Make the most out of every adventure with help from our weekly newsletter delivered to your inbox.

It’s shoulder season everywhere, particularly in the Andes, where clear sunny days linger through September. For trekkers who prefer to have the mountains to themselves, this is the best time to go – utter solitude beckons on many hiking routes.

The Inca Trail is always well-trodden, but alternatives such as the Salkantay Trek, where you traverse a 4660m (2.9-mile) pass loftier than any point on the Inca Trail, allow you to lose the crowds. September also marks the end of the jungle’s dry season, so it’s a good time to try rainforest trekking or wildlife-watching on a boat trip from Iquitos or Puerto Maldonado before the spring rains descend and make travel trickier.

As the action in the interior decreases, it’s pre-peak season on the coast. Toward late spring, the thick garúa (coastal fog) that’s been enveloping Lima since July begins to lift, but it is worth visiting Peru’s dynamic gastronomic capital earlier. In September, it bustles with fabulous Mistura, a food festival showcasing the nation’s exceptionally varied cuisine.

Temperatures are rising along the country’s sandy beaches too, but the masses have not yet checked in. By November, waves at Peru’s best surfing spots – including the home of the planet’s longest left wave at Puerto Chicama – are approaching their cresting best.

December to February is the best time for beach lovers

This is the season to see Peru’s paradisiacal sandy strands at their best. Sunbathing on the searingly warm northern beaches is delightful – temperatures routinely hover in the 30°C to 40°C (86°F to 104°F) realm, and crowds flock to see-and-be-seen resorts like trendy Máncora.

It’s peak surfing season too. But for a different coastal experience, a boat trip – to the rarely glimpsed mangrove forests near Tumbes, or to the rocky sealife sanctuary of Islas Ballestas near Paracas, where sea lion pups are born in January – is mesmeric.

From Paracas, it’s a straight shot inland to Peru’s most colossal dunes at Huacachina – sand-boarding down is the coastal region’s greatest adrenalin rush. Lima is largely garúa-free, so capitalize and try activities like paragliding over the city. Inland, the wet season is at its height, and the Inca Trail is closed through February.

March to May is best for budget travelers and festival fanatics

With the exception of the riotous pre-Easter revelry of Semana Santa (Holy Week), this is a wallet-friendly time to visit Peru. Summer’s manic crush of visitors is over, the coast retains pleasant weather through March, and deals can be struck as popular spots try to eke out their custom. Nor is it high season in the Andes or the Amazon, despite increasingly sun-kissed weather and bursts of bewitching greenery tinting the slopes, so accommodation and tours will be well below high-season tariffs.

The coastal strip entices as grapes ripen to the picking point, erupting in Ica’s wine-harvesting celebration, Fiesta de la Vendimia. Up in the mountains, against a canvas of steadily improving dry, bright weather, May can rival high season in terms of eye-popping festivals, such as the spectacle of Señor de Muruhuay, one of South America’s biggest pilgrimages held near Tarma, or the intriguing religious celebration of Fiesta de las Cruces, in cities like Cuzco, Ayacucho and also Lima.

It’s optimum beach season, with dry, sunny weather and resorts rocking on the coast. On the popular Islas Ballestas, sea lion pups are being born, which makes for great wildlife-watching. But the mountains and jungle are wet, wet, wet and best avoided by trekkers who dislike the mud messing up roads and trails.

Fine coastal weather and heavy rain in the Andes mean that, like last month, beaches are in, and the deluge-ridden mountains are pretty much out, with the Inca Trail officially closed. By the end of the month, though, it’s time for Latin America’s biggest party, and from late February to early March, carnavales (carnivals) reverberate across the country.

Sunny weather lingers along the coast, and waters have been warming to very swimmable temperatures, but it’s the tail-end of the season here. Meanwhile, a freshly green Andes is waking up to tourism again as the worst of the rain has passed. Orchids bloom on the Inca Trail, Amazonian birds conduct mating rituals, grapes fatten on vines near the coast, and another legendary party is on the horizon: Semana Santa, or Holy Week.

For those looking to combine coast and mountains, April might nail it. The rainforest is still especially soggy, and temperatures are cooling on the beach, but tourism is thriving again in Cuzco and across the Andes, thanks to increasingly pleasant mountain weather and shenanigans for Semana Santa (should it fall in April).

This is a great time to visit Peru. It’s sunny and dry in the Andes, but without the crowds of North American and European holiday-makers that begin to arrive next month. The southern Amazon Basin is drying out, too, meaning more navigable roads. Here, less rain and falling water levels coax out bird and river life. Nationwide, Peru’s festival calendar is especially dense.

Peak season is dry and clear in the interior, albeit chilly at night, which makes sense as it’s also the country’s winter. Likewise, in the Amazon, drier weather sees tourism near its zenith. Festivals rage throughout both zones. Milder, foggier weather means the beaches are less frequented.

There’s more prime-time weather in the mountains and jungle as the high season continues. It’s sunny, crisp and clear – perfect for seeing the Andes at their best (though you’ll want to watch for snowfall at high altitudes). It’s also as dry as the Amazon gets (OK, this is still pretty moist), with animals visible along riverbanks on boat trips. Lima gets the garúa bad this month.

More steady weather hits the Andes and the Amazon, with temperatures topping out around 20°C (68°F) in Cuzco and a little higher in the jungle metropolis of Iquitos. In these regions, it’s the last month of the high season; however, it’s quieter on the festival front after June and July’s hectic schedule.

It’s shoulder season across Peru, but don’t let that deter you from visiting. On the contrary, the spring weather is favorable in the Andes and Amazon and improving on the coast, meaning it’s a fine time to enjoy the country without the crowds. Dry season is approaching its end, so do that mountain hike or jungle trek while you can.

As rains and stormy skies return to the Andes and the Amazon, waterlogging trails and roads, the coast glows in the throes of agreeable late spring weather. From now through April, waves become wilder, and surfers are especially quick to return to the beach.

Beach-goers, get down to that beautiful coastline: high season is here. Lima now boasts temperatures of 24°C (75°F), and north towards the equator, it’s toastier still. The Andes and the Amazon are now receiving serious precipitation, and both are generally a washout.