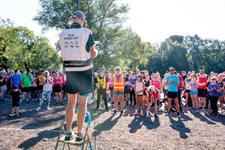 The charity behind Parkrun recorded its highest-ever income last year.

Parkrun Global raised £5.6m in the year ending in January 2022, boosted by the one-off acquisition of the company running its events in Australia.

The organisation’s latest accounts, published today by Companies House, show that the deal was worth £1.4m to the charity.

As a result its income rose by nearly one-third compared with 2020/21.

About 62,000 free Parkrun events took place across the world in the past 12 months, with more than one million people taking part during the year, the accounts say.

More than £2.5m of this spending supported Parkrun events across the UK, while just over £1m went on raising further funds for the charity.

Parkrun Global ended the year with a £1.3m surplus.

The accounts also show that the charity is set to receive £5m over the next five years from Sport England, starting in 2022/23.

Paul Sinton-Hewitt, who founded Parkrun and sat as a trustee until June this year, was paid £77,000, taking his total remuneration through the charity to more than £350,000 since 2018.

Sinton-Hewitt benefited from a clause in the charity’s governing document guaranteeing him both a permanent place as a trustee and the exclusive right to be paid as an employee while sitting on the board.

He left the board to join the charity’s senior management team earlier this year as part of a governance shake-up led by Russ Jefferys, the new chief executive.

The accounts say Sinton-Hewitt was paid “for his daily work in promoting Parkrun within the UK and globally, and performing ad hoc services to sponsors, grant providers and the wider community as and when required”.

An internal report prepared for Parkrun Global earlier this year, seen by Third Sector, criticised the charity for operating like “an old boys’ club” under its previous leadership and freezing out volunteers from decision-making.

The charity reported itself to the Charity Commission in June after learning that Nick Pearson, the previous chief executive, had received “undisclosed and unapproved” payments from a third-party supplier to one of its subsidiaries. The accounts say the charity has now recovered the funds.

Parkrun Global’s income from retail and advertising rose from £430,000 to £1.5m, recovering after the impact of Covid-19 last year.

A spokesperson for the charity said: “The positive shift in reserves and record income means we are well placed to strengthen the organisation and plan for the future.”

Amazon Commitment To 8-10 Films Annually: What This Means
How Congress may make it easier to set money aside for emergency expenses
Cancer charity forces Waitrose into Christmas TV advert rethink
Stuart Weitzman Is Launching Handbags—And They’re Perfect for All Your Holiday Parties
How to Level Up Your Look With KK & Jay