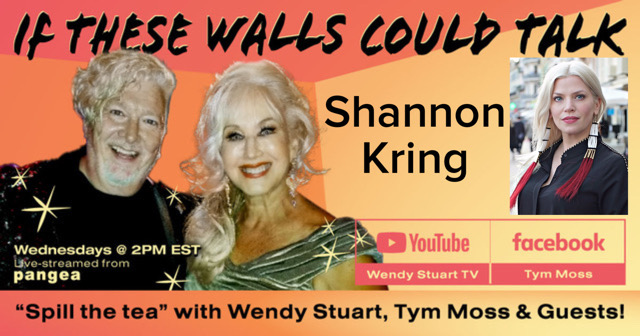 Who else but hosts Wendy Stuart and Tym Moss could “spill the tea” on their weekly show “If These Walls Could Talk” live from Pangea Restaurant on the Lower Eastside of NYC, with their unique style of honest, and emotional interviews, sharing the fascinating backstory of celebrities, entertainers, recording artists, writers and artists and bringing their audience along for a fantastic ride.

Shannon Kring will be a featured guest on “If These Walls Could Talk” with hosts Wendy Stuart and Tym Moss on Wednesday, November 2nd, 2022 at 2 PM ET live from the infamous Pangea Restaurant. 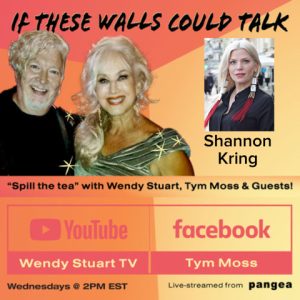 Wendy Stuart is an author, celebrity interviewer, model, filmmaker and along with If These Walls Could Talk she hosts TriVersity Talk, a weekly web series with featured guests discussing their lives, activism and pressing issues in the LGBTQ Community.

Shannon Kring is an Emmy-winning producer/director. Fearless humanitarian. Ally to the world’s forbidden and forgotten. Wielding the transformative power of storytelling, she amplifies the experiences of those left vulnerable and voiceless through years of systematic oppression. Her work changes minds, opens hearts, and inspires social and policy change.

Shannon’s documentaries have been presented by dozens of governments, top international broadcasters, and institutions including the UN Permanent Forum on Indigenous Issues, the Smithsonian Institution Museum of the American Indian, NASA, MIT, and the British Museum. Shannon works with the United Nations; the White House; the US Department of Health and Human Services, Office of Community Services, an Office of the Administration for Children and Families; the US Department of State; United States Agency for International Development, UN Environment Programme, and other national and global bodies concerning the indigenous and other marginalized members of society, environmental sustainability, animal welfare, human rights, and cultural preservation. She is a UN World Tourism Organization Liaison and serves as Honduras’ Official Goodwill Ambassador.
After living in places as diverse as Helsinki and San Pedro Sula, Honduras (then the Murder Capital of the World), Shannon returned to the US in 2016 to begin production on her latest feature documentary, END OF THE LINE: THE WOMEN OF STANDING ROCK. The film won the 2022 Hollywood Critics Association Television Award (Best Broadcast Network or Cable Documentary TV Movie) and took runner-up at the UK’s prestigious 2022 Sandford St Martin Awards (Journalism). It was nominated for the national 2022 News & Documentary Emmy Award for Outstanding Social Justice Documentary. 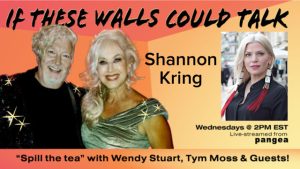 In 2018, Shannon became the first and last US director and third woman ever awarded backing by the Finnish Film Foundation in its then 69-year history. In 2019, she won the Stella Artois-Women in Film Finishing Fund Award. This year, she was producer on two of the six finalists for the Library of Congress Lavine/Ken Burns Prize—including on the winning film, PHILLY ON FIRE, on which she serves as producer and executive producer. Shannon is also an accomplished writer, having authored five multi-award-winning nonfiction books and articles for publications ranging from TIME Magazine to GASTRONOMICA: THE JOURNAL OF FOOD AND CULTURE. She was recently nominated for Hollywood’s highest screenwriting honor, the 2022 Humanitas Prize.

Watch Shannon Kring on “If These Walls Could Talk” with hosts Wendy Stuart and Tym Moss on YouTube here: