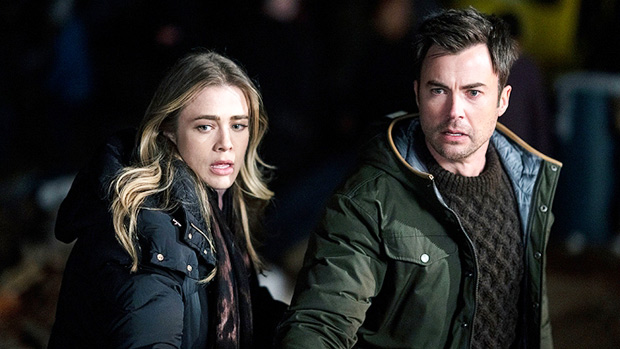 Manifest has one flight left thanks to Netflix. Part 1 of the fourth and final season will premiere on November 4. Just days before the release of Part 1, Netflix revealed the first 7 minutes of the season 4 premiere on Tudum. HollywoodLife also spoke EXCLUSIVELY with Josh Dallas and Melissa Roxburgh about what lies ahead.

The supernatural drama series originally aired on NBC for 3 seasons until it was shockingly canceled by the network due to low ratings. The show started streaming on Netflix where it became a hit, and fans led a campaign to save the show that even Stephen King supported. Eventually, Netflix renewed the show for a fourth and final season, which will be broken up into two parts.

Manifest was created by Jeff Rake and premiered on September 24, 2018. The show centers on a group of passengers and crew of a commercial airline plane that goes missing in the air, only to reappear 5 years later. Everyone on the plane was presumed dead, so the entire world is shocked when they show up as if nothing happened. Here’s everything we know so far about Manifest season 4, including the release date, cast, and more.

Part 1 of Manifest season 4 will premiere on November 4, 2022. All 10 episodes of Part 1 will drop that day so fans can binge-watch right away on Netflix. Part 2 will also feature 10 episodes, though Netflix has yet to reveal a premiere date for the final episodes of the series. Season 4 is premiering over one year after the season 3 finale aired on June 10, 2021.

Jeff Rake had a six-season plan mapped out for Manifest, but NBC still canceled the show after three seasons on June 10, 2021. Warner Bros. started licensing the show to Netflix, where it immediately debuted at the top of Netflix’s Top Ten charts. After six weeks, the show surpassed 1 billion minutes viewed. However, Warner Bros. announced at the end of June 2021 that the show wouldn’t be moving to Netflix after brief negations between the two companies. But Jeff Rake didn’t give up and continued pitching to save Manifest, with help from a fan-made Change.org petition that amassed over 95,000 signatures. “We’re trying to find a way to conclude the series. Could take a week, a month, a year. But we’re not giving up. You deserve an end to the story. Keep the conversation alive. If it works out, it’s because of YOU,” Jeff said on Twitter.

Netflix officially renewed Manifest for a fourth and final season on August 28, 2021. That was fitting since the plane that goes missing in the show is Flight 828. Jeff reacted to the exciting news in a statement, saying, “What started years ago as a flight of fancy deep in my imagination has evolved into the jet engine journey of a lifetime. Never in my wildest dreams could I have envisioned the worldwide outpouring of love and support for this story, its characters, and the team who work so hard to bring it all to life. That we will be able to reward the fans with the ending they deserve moves me to no end. On behalf of the cast, the crew, the writers, directors, and producers, thank you to Netflix, to Warner Bros., and of course to the fans. You did this.” The cast began filming the final season in New York City in November 2021 and wrapped during the summer of 2022.

Jeff also discussed Netflix saving Manifest in an interview in August 2022. “It was just euphoric,” he told Tudum, Netflix’s official companion website. “It’s hard to deny that there’s something kind of divinely inspired about this pickup and that the universe has been looking out for us. I’m a man of faith, and I like to believe that what you put out in the world comes back to reward you.”

Where Can I Watch Manifest Season 4?

Manifest will be available to stream exclusively on Netflix in the United States and other international countries. The show will no longer air on network television on NBC. Parts 1 and 2 of the 20-episode final season will be released separately on the streaming service.

What Do We Know About What Will Happen Next Season?

Netflix released the official description for Manifest Season 4 on August 28, 2022: “Two years after the brutal murder of Grace turned their lives upside down, the Stone family is in shambles as a devastated Ben continues to mourn his wife and search for his kidnapped daughter, Eden. Consumed by his grief, Ben has stepped down from his role as co-captain of the lifeboat, leaving Michaela to captain it alone, a near-impossible feat with the passengers’ every move now being monitored by a government registry. As the Death Date draws closer and the passengers grow desperate for a path to survival, a mysterious passenger arrives with a package for Cal that changes everything they know about Flight 828 and will prove to be the key to unlocking the secret of the Callings in this compelling, mind-bending, and deeply emotional journey,” the description reads.

Netflix also released a one-minute teaser for the new season on August 28, which can be seen above. It shows big moments that happened in the first three seasons and some new footage from season 4. The official trailer was released on September 24, 2022.

HollywoodLife spoke EXCLUSIVELY with Josh Dallas and Melissa Roxburgh ahead of Part 1’s premiere about what to expect from Ben and Michaela. Josh revealed that Ben is “not handling” Grace’s death well. “He is still stuck in this profound grief and anger. He’s not willing to let it go. I think he’s afraid to let it go because I think he feels that he’ll lose Grace forever in some strange way if he doesn’t hold on to his grief,” he said.

Josh also noted that Ben’s grief complicates his feelings for his son, Cal. “He’s dealing with his son who is not only older in age that he’s supposed to be, but there is some complicated feelings that I think Ben has that he blames Cal in some ways for Grace’s death,” Josh continued.

As for Michaela, Melissa told HollywoodLife that Michaela’s love life remains complicated. “She’s obviously very much in love with Zeke but also has a profound love for Jared. We get to see the result of her decision based on that comment from Jared going into season 4, and the triangle does not die,” Melissa teased.

Two major cast members aren’t returning for Season 4. Athena Karkanis won’t be back as Ben’s wife Grace Stone, who died in season 3. Jack Messina, who played Ben and Grace’s son Cal, will be replaced by an older actor, Ty Doran, due to the two-year time jump in the new season. Ty made his first appearance in the season 3 finale.

Season 4 will welcome some new characters as well. They include Flight 828 passengers Henry Kim and Kyle Boyd. Tela and June are two Indigenous characters who will be introduced. Netflix hasn’t revealed anything else about these new characters. It’s also possible that Josh’s wife and Once Upon a Time co-star Ginnifer Goodwin appears in the new season. Ginnifer posted a selfie of herself on a Montego Airways plane and wrote “@joshdallas is taking me on a trip somewhere,” hinting that she may appear on her hubby’s hit show.

Who Is On The Creative Team For Season 4?

What is the Budget for Manifest Season 4?

Thanks to Netflix, the budget for Manifest increased for the fourth and final season. Per reports, the show’s episodic budget went from $4 million to $5 million, while creator Jeff Rake and the full cast get a pay increase, according to ScreenRant. Let’s hope the cash boost means this season of Manifest will be the best one yet!