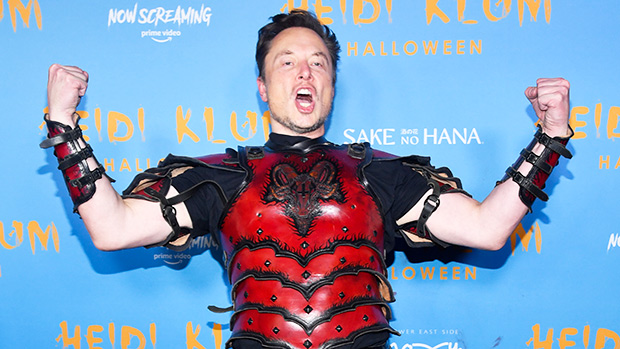 Elon Musk was clearly in great spirits as he attended Heidi Klum’s Halloween party on Monday, October 31. The billionaire, 51, flexed his arms and looked like he was shouting as he posed for a photo on the red carpet, in full-on samurai gear. It seemed like he was in a celebratory mood, after he finalized his deal to buy Twitter the week before.

Elon seemed like he was wearing casual clothes under the costume. The samurai gear was deep, blood-red and had a goat printed on the front. His costume was complete with wristguards and leg coverings. Besides the shot where he looked like he was yelling, there was another photo where he simply smirked and looked happy.

Elon’s date for the party was his mom Maye, who also accompanied him to the Met Gala back in September. It wasn’t as clear what her costume was supposed to be, but she wore a leather trenchcoat and high-heeled black boots with red laces. She also appeared to have some of her hair dyed black, so maybe it was a modern Cruella Deville look.

Elon had shared a photo of him and his mom as well as another woman before heading off to the party on Twitter. He also posted a photo of him getting out of a car in his costume. “Halloween with my mom,” he wrote along with the photo.

The Halloween party came shortly after Elon’s controversial acquisition of Twitter. The night before Elon went to Heidi’s party, he was also a guest at Bella Thorne’s party on Sunday evening. A guest at the party revealed to HollywoodLife exclusively that the Tesla founder was happy to “openly” discuss his plans for Twitter with the guests. “Elon’s appearance had everyone talking and so many guests there were asking him questions about Twitter,” the source said. “He was speaking about it openly and it was clear he was super proud of taking ownership of Twitter. He seemed very emotionally invested in it. No one was coming for him or trying to get into an argument. Rather, it was very mature conversations that were taking place, where Elon was listening to people’s thoughts, and you could tell he was genuinely interested.”

How to Stand Up to a Dictator
Cafeteria culture in Indiana: try the ultimate comfort food
‘RHODC’ Star Catherine Ommanney Claims She Had Alleged Affair With A 21-Year-Old Prince Harry
Erica Mena Tells Critics of Her Child Support to Mind Their Business
11 Punny Mugs for Language Lovers