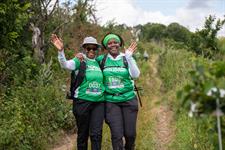 Macmillan Cancer Support could lose out on millions of pounds after cancelling fundraising events as a mark of respect for Queen Elizabeth II.

The charity has called off four walks planned as part of its Mighty Hikes fundraising programme, which were due to take place at two venues this weekend.

The UK is in the official period of mourning for the Queen, who died on Thursday. The mourning period will continue until Monday, the day of her state funeral.

Macmillan did not provide details about how much money it had forecast to raise from the weekend, but Third Sector understands that last year the events raised £1m at each venue.

The charity’s most recent accounts show that it raised £12.6m from all the Mighty Hikes events in 2020/21.

Claire Rowney, executive director of fundraising at Macmillan, said: “Mighty Hikes is one of our most-loved events, including by all of us at Macmillan, and we know how much time, commitment and hard work goes into training and fundraising for one.

“Cancelling was not a choice we took lightly, and we have shared in the upset and disappointment felt by our supporters in doing so, particularly in such extraordinary circumstances.

“We made this unprecedented decision as a mark of respect for her late Majesty the Queen and Macmillan’s patron, His Majesty King Charles, and to eliminate uncertainty for participants as quickly as possible, including ensuring they could avoid any unnecessary travel and additional costs.”

Rowney said all participants would be offered the chance to join the event next year or receive a refund.

Lovecraft Minus Lovecraft: The Best Cosmic Horror Books that Reject Lovecraft’s Racism
The Great Appeal of Platinum: Catalytic Properties
We could soon lose our rights to proper flight compensation – here’s what you need to know
Song of the Week: Cardi B and GloRilla Fire Back at the Haters on “Tomorrow 2”
“A Species Between Worlds” Takes Us Through Humanity’s Journey with Technology