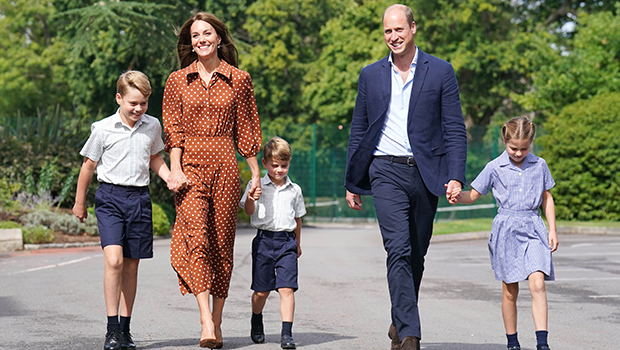 Britain’s Prince George, 9, and his little brother Prince Louis, 4, adorably twinned on the first day of school! The royal brothers rocked navy blue shorts for the big day at Lambrook School in Berkshire, UK, along with shiny black shoes and matching socks, and white collared shirts with short sleeves. In pics, the rapidly growing princes held hands and walked alongside their parents, Prince William and Kate Middleton, while Princess Charlotte, 7, wore a cute blue daydress and an updo with stylish twists.

The ever-fashionable Duchess of Cambridge wore an autumn-ready brown polka dot midi dress and simple pumps as she laughed and talked with her family members. Prince William wore a navy-blue suit that coordinated perfectly with his children’s school uniform looks, along with brown suede loafers.

In another pic, the royal kiddos were greeted by school Headmaster Jonathan Perry, who shook hands with Princess Charlotte as her brothers and parents looked on proudly. The royal kids were reportedly at the school for a “settling in” day as they readied for classes to officially commence. The day is meant to welcome new students and their families. The family reportedly moved to Adelaide Cottage in Windsor’s Home Park in order to be close to the children’s great grandmother, Queen Elizabeth II, is currently living at nearby Windsor Castle.

“Ahead of their first day at Lambrook School, Prince George, Princess Charlotte and Prince Louis, accompanied by The Duke and Duchess of Cambridge, today attended a settling in afternoon for new pupils at the school,” a statement from Kensington Palace issued on Wednesday, September 7, reads, per Newsweek. “The settling in afternoon is an annual event held to welcome new starters and their families to Lambrook and takes place the day before the start of the new school term.”

Prince Louis is only four years old, so this is his first day of school, while Prince George and Princess Charlotte formerly attended Thomas Battersea School in London.