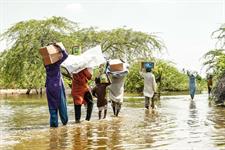 The Disasters Emergency Committee has raised more than £16m in five days through its appeal to help people affected by the flooding in Pakistan.

The total includes £5m in match-funding provided by the UK government.

The money will be used by 11 of the DEC’s members, including Islamic Relief Worldwide, Save the Children UK and Cafod, working with partners in the region.

The DEC said at least six million people in Pakistan needed urgent help after last month’s floods, which have left one-third of the country under water and more than 1,200 people dead.

The DEC launched the appeal on Thursday with televised appeals broadcast on the BBC, ITV, Channel 4, Channel 5 and Sky.

Madara Hettiarachchi, director of programmes and accountability at the DEC, said: “People are struggling to get access to food and medical supplies, and there is a high risk of disease outbreaks. We are fearful of what is to come, and in the next few days we must do all we can to reach the most isolated communities that have been cut off.

“We are asking the public to be as generous as they can to get help to as many people as possible.”

The money will be used to provide food, clean water, emergency shelter and healthcare services to the millions of people affected by the floods, the DEC said.

The DEC’s humanitarian appeal in March following the Russian invasion of Ukraine raised £100m in its first five days, while its appeal to help people in Afghanistan, which was launched in December, raised £17.5m over the same period.