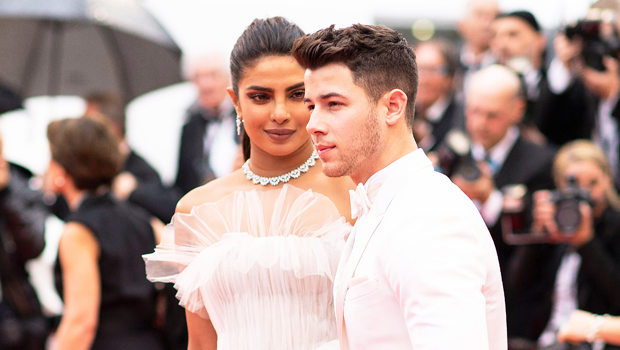 Nick Jonas better be careful. During the ‘Jonas Brothers Family Roast,’ Priyanka Chopra admitted she couldn’t see herself with anyone but him – unless a certain buff Australian slides into her DMs.

The saying is “nobody can hurt you like family can,” and Priyanka Chopra certainly went in for the kill during the Jonas Brothers Family Roast on Netflix. During the streaming giant’s comedy special, which debuted on Nov. 23, Priyanka, 39, was able to take a few playful shots at her husband, Nick Jonas. The Quantico addressed those who “questioned our marriage” and thought her tying the knot with Nick, 29, was some kind of publicity stunt. “How could it be?” she asked. “I didn’t even know how famous Nick was? All I knew was that he was Kevin Jonas‘ baby brother.” She also said that three years after saying “I Do,” she “wouldn’t want to be married to anyone else, guys. Unless, of course, Chris Hemsworth suddenly became single. Might change things.”

Thankfully for Nick and his marriage, Chris has been happily married to Elsa Pataky for over a decade. Unfortunately, the Thor star wasn’t on hand to reply to Priyanka’s offer. However, the Jonas Brothers Family roast saw Pete Davidson, Lilly Singh, and others taking turns roasting the JoBros. John Legend even put his jokes to music, which was doubly impressive.

“Working-class lives, growing up with the dream / They made a lot of money, made a lot of girls scream / The music they created took over the globe / sold-out shows wherever they’d go / all I want to be is their favorite fan / I wrote a song to tell them they’re my favorite band,” John, 42, sang at the start of the song, serenading Nick, Kevin, and Joe Jonas, before delivering the knockout.

“I wish they could hear it, but they’re not here today / No John, Paul, George, or Ringo / just Joe, Nick, and I want to say…Keith?” Legend finished his song about how they’re “not quite The Beatles” and how they’ll never match the Fab Four “in this life.”

The Jonas Brothers – Nick, Joe, 32, and Kevin, 34 – shared how the Jonas Brothers Family Roast came to be in a discussion with Entertainment Weekly. “We had always talked about wanting to do a roast and finding the right moment and partner to do it with,” said Nick. “We had a meeting with Netflix, and I think at the introduction of the idea, we were already full steam ahead. They were on board right away, and then we kind of had a second-guess moment of: ‘Are we sure we want to do this?’”

“We were wrapping this tour up, and we thought, what better way to finish this tour than with being humiliated on stage?” added Joe. “We felt it was best to really humble ourselves and have all of our favorite comedians make fun of us. We gotta be ready for Thanksgiving and humble ourselves. Show a lot of gratitude.”