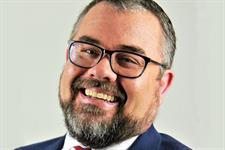 The sight loss charity Sight Scotland has appointed Craig Spalding as its next chief executive.

He succeeds Mark O’Donnell, who announced in the summer that he would step down after four years in post to take on a consultancy role.

Spalding, who has been in his current role since 2019, trained as a microbiologist and worked in the food and biotechnology industries in his native Australia before joining the Australian Red Cross Blood Service, where he worked in a variety of roles.

He then became director of quality and compliance at the Irish Blood Transfusion Service.

Sight Scotland says it is Scotland’s largest visual impairment charity and provides research and support to people with sight loss, including through residential care and community services and the Royal Blind School in Edinburgh.

Michael Craig, chair of Sight Scotland and Sight Scotland Veterans, said: “Craig is a visionary leader, who will bring with him enthusiasm and a fresh perspective to help us towards our joint mission of reaching everyone in Scotland with sight loss – where and when they need us.”

Spalding said: “To become a part of an organisation with a rich history that makes a difference in the lives of many people in Scotland, along with the ambition to increase our reach to many others, is truly motivating and somewhat humbling.

“I can’t wait to begin my journey at Sight Scotland and Sight Scotland Veterans, helping both colleagues as well as the people of Scotland affected by sight loss transform, unite and thrive.”

Spalding will take up his new role on 24 January.