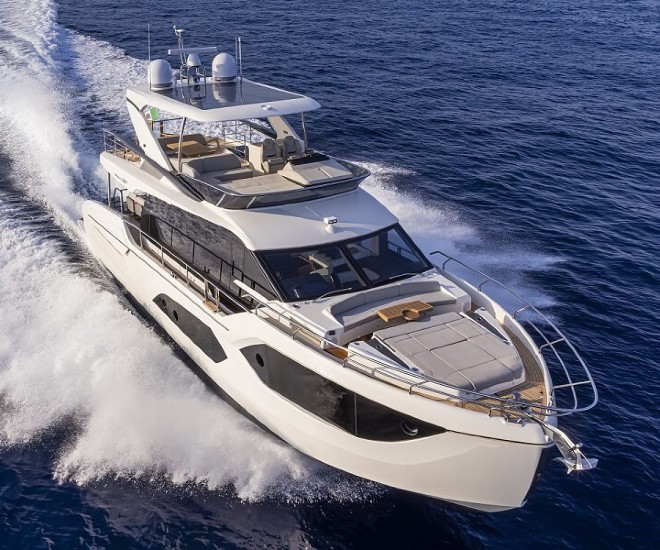 A year after launching its Navetta 64, Absolute Yachts is back again debuting its new 60 Fly, one of two world premieres at the Cannes Yachting Festival.

You can tell the 60 Fly has been created to have a spectacular vacation right from the yacht’s beach platform as it is two metres long and almost five metres wide. The platform is large enough to be furnished with lounge chairs, suitable for sunbathing and swimming, as well as launching the tender and water toys.

From the beach platform, stairs lead you up to the aft cockpit. The railings have glass panelling underneath, making the visuals transition seamlessly from the platform to the aft cockpit. Furthermore, the cockpit can be furnished up to the owner’s interpretation, thanks to the modular furniture designed in-house.

The cockpit is shaded by the overhang and can be fitted with privacy screens as well, with the entire beach area shaded by a concealed awning, giving owners the option of privacy.

From the aft cockpit, covered side passages lead to the foredeck which is furnished with a couch, table, and sun pads. The sun pads feature headrests that can be easily flipped around to become backrests, converting them into a second couch — versatility is one of the key drivers for the Fly 60.

From the port side of the aft cockpit, a stairway leads you to the fly deck. Similar to the aft cockpit, the fly deck can be set up with modular pieces according to taste. There is a bar with a sink and grill to port and a U-shaped couch and an inlaid teak dining table to starboard. The helming area has two seats by the wheel, with sunpads beside them and a banquette right across.

Absolute’s engineers have been testing solar panel setups at its shipyard for the past few years, and have finally come to an arrangement that meets its standards. The solar panel is installed on the hardtop of the 60 Fly — an optional feature but we think it will be a popular choice as sustainability becomes an important part of our daily lives.

CCO of Absolute, Cesare Mastroianni, said: “We test everything in-house. Even the glass we used under the railings was crash-tested at the shipyard in the presence of RINA-certification technicians. We had wanted to provide a certain amount of renewable energy aboard our yachts, especially for running them in hotel mode with the engines and generators off, so we began testing solar panels a couple of years ago.”

The systems on the 60 Fly produce 1.5kW, enough to power the fridge, water heater, entertainment system, and more for hours without using the generators. Owners and captains are able to monitor energy consumption on the Garmin screens — indicating how much energy is being used and how much is left.

“Although the solar power on this model is not enough for running the AC, we installed windows and portholes that can be opened for natural air circulation through the yacht,” Mastroianni adds. “With this setup you can enjoy time at anchor in total silence with zero emissions, a real plus.”

The galley is to port when you walk into the saloon, with a dining table to starboard. There are fitted drawers for plates and glasses, which are concealed under the furnishings and open easily and quietly. The saloon floors are finished in walnut and is on the same level as the aft cockpit, with large glass doors connecting the two merging the indoor and outdoor areas into one space.

The twin-seat helm operates a Volvo Penta IPS propulsion system with joystick control that’s operated via intuitive Garmin touchscreen monitors. Absolute was an early adopter of energy-efficient, low-vibration propulsion systems as it was in-line with its values of intelligent consumption and onboard comfort.

Not far behind the saloon is the full-beam master cabin, which is a standout feature due to its location fore on the lower deck.

The bed is placed in the centre, backed with velvet panelling and the bedroom offers gorgeous views through the large forward windows which also include opening portholes for natural air circulation. The master bath is also full-beam and fitted in stone. The shower follows the yacht’s hull shape, allowing for water to be drained quickly and efficiently.

The other VIP en-suite cabins are just as lavishly finished. There is also a cabin for crew accessed via the transom. The separate access route ensures privacy for owners and guests alike.

While Absolute’s 60 Fly might not be its biggest ship, it is a step in a green future for the shipyard — with the green efficiency to the well thought out construction.

Also in yacht news, Gulf Craft delivered its flagship Majesty 175 to its owner recently. Said to be the crown jewel of the UAE builder’s fleet, it is the world’s largest composite production superyacht and certifies Gulf Craft’s position as the Middle East’s leading yacht builder.

Sunseeker’s Predator 65 will be having its global debut next year in January at Boot Düsseldorf. Standing at 67 feet wide, it features an aerodynamic exterior with tinted glazing. Boot Düsseldorf will be happening from January 22 to January 30, 2022.