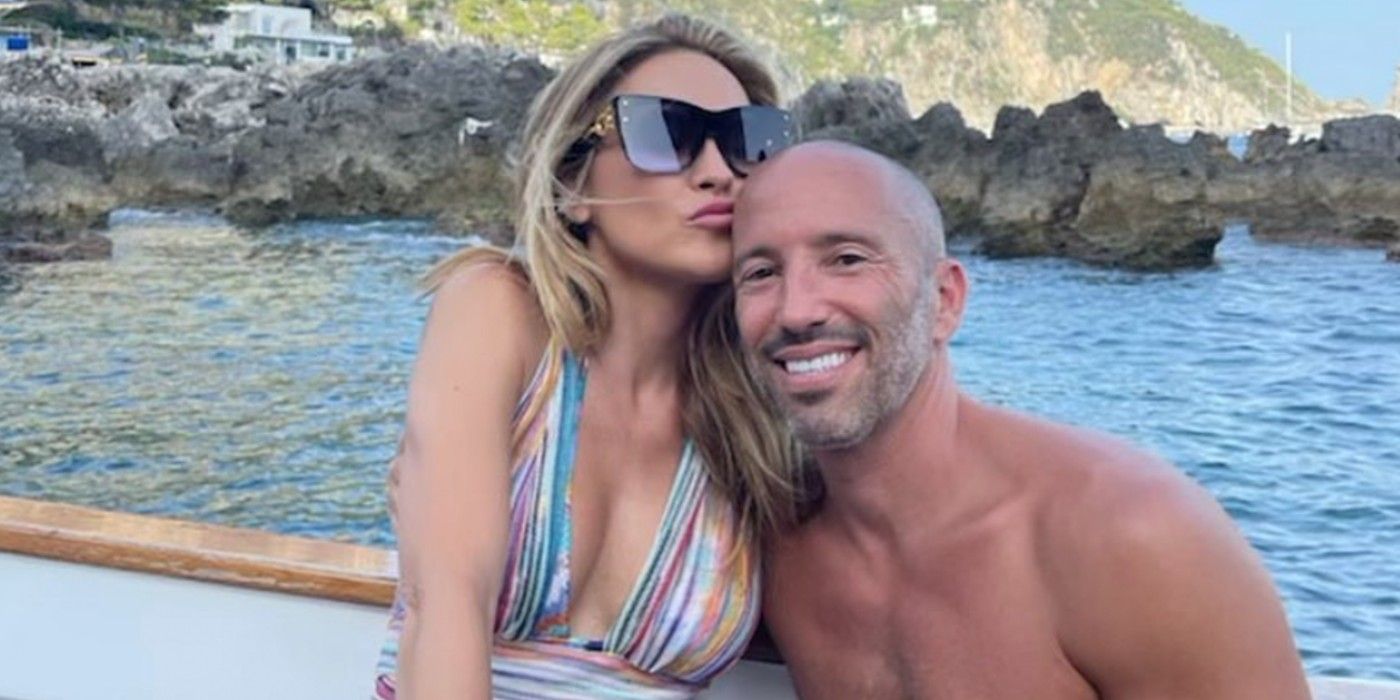 As Selling Sunset season 4 approaches, the most controversial couple in the office, Jason Oppenheim and Chrishell Stause, will not be featured as a couple on screen. Over the course of the summer, the cast of Selling Sunset has experienced a variety of changes, both on Selling Sunset and in their personal lives away from the series. While fans have been able to catch up with their favorite cast members virtually, they have yet to receive new content on the streaming service since Selling Sunset season 3. From Heather Rae Young’s approaching wedding to Christine Quinn’s book reveal, the stars of the Netflix series have expanded their careers and also continued to focus on their jobs at The Oppenheim Group.

While the Selling Sunset cast has had mixed opinions on Jason and Chrishell’s recently revealed romance, fans have eagerly tracked the relationship between the co-stars, following the two closely on social media. An unlikely couple and certainly an added challenge for the work dynamics at The Oppenheim Group, Jason and Chrishell have proven to be committed to their romantic connection, despite controversy within the office. Without any significant updates, except for a number of photographed moments together, the couple has yet to contribute much to the conversation on their love life.

According to Metro, Jason and Chrishell’s relationship will not play a role Selling Sunset season 4. Confirmed by fellow co-star Mary Fitzgerald, Jason and Chrishell’s relationship will not be revealed on the series. Mary shared that this trending romance was formed “between seasons 4 and 5,” leaving fans with an indefinite amount of time before they get to see the co-stars together. Without a solidified plot, Mary does suggest that season 4 has plenty of moments that fans “[won’t] expect” from the series. As the couple develops their relationship away from Selling Sunset, audiences will certainly be disappointed that their lingering questions about the couple will be put on pause.

Jason and Chrishell may not have a clear relationship update, but Mary promises a number of exciting moments to make up for the lack of answers. Mary described Selling Sunset season 4 as “shocking” and vaguely alluded to the upcoming “relationship divide[s],” referencing Christine’s tense relationship with Heather and various Selling Sunset co-stars. Without giving away any critical details, Mary revealed that this “divide” involves “Christine and the rest of the real estate agents.” Heavily focused on Christine, Selling Sunset season 4 appears to concentrate on relationships within the office rather than romance.

Over the course of the past three seasons, Selling Sunset has explored the exclusive housing market of the Hollywood Hills, alongside the explosive happenings within The Oppenheim Group. Even though previous seasons have provided scandal, plenty of shocking altercations and a number of fallings-out between agents, season 4 promises a heightened level of drama. The series appears to explore not only the solidified alliances from the previous season but also introduces a number of new faces to The Oppenheim Group. With some mystery surrounding the focus of season 4, Mary promises plenty to look forward to and a deeper dive into Christine’s toxic presence in the office, alongside additional “divides” that have developed since Selling Sunset season 3. While Jason and Chrishell may not be at the forefront next season, fans can expect just as much tension and a significant update about Christine, one of the series’ trademark real estate agents.

Josh Flores is a features writer for Screen Rant, focusing on the latest news in the world of reality television. He recently graduated from Biola University with a B.A. in English and an emphasis in writing. Previously, he has held the title of editor, staff writer and student.

When he is away from his laptop and writing projects, he can be found discovering new bookstores around Orange County, binging the latest episodes of Married at First Sight, playing Kacey Musgraves on repeat, exploring cozy coffee shops and obsessing over Bob’s Burgers.

Baidu kicks off its robotaxi business, after getting the OK to charge fees in Beijing
Jonathan Larson’s Life and Death: How His Legacy Lives on in tick, tick… Boom!
Paris Hilton and Husband Carter Reum Hit Bora Bora for Honeymoon
The 15 best ski resorts you can reach by train: how to get there and when to book tickets
Joy Behar Tells People to ‘Come Out’ This Thanksgiving